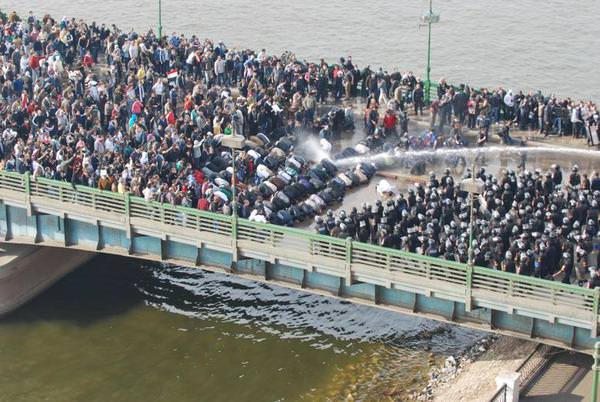 The regime could not stop the Jummah prayers. People are speaking in a unified voice.. Predident Mubarak has not spoken about this situation.  People do not want to stay off the street until President steps down. The ruling party (National Democratic Party) headquarters was set on fire, which is next to the National Museum.  A chain of protesters formed a chain around the museum of antiquities.

Protesters greeting army on the streets with joy! The army does not seem to be supporting President Mubarak, but has not declared support of the protest yet. This may be the tipping point of the country.  After Jummah Salah the mood of the country changed and there is hope and excitement reported. AlJazeerah reports crowd as gentle. Reports of the elite of the country leaving in private jets. 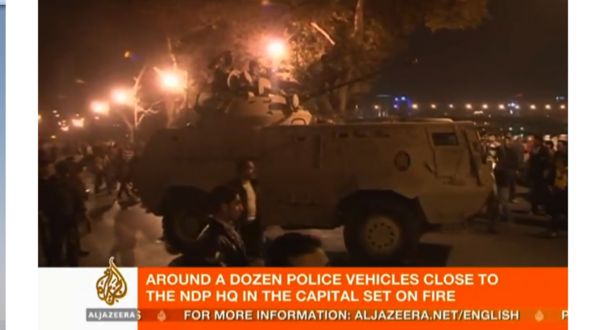 Eleven people have died in the Egyptian city of Suez- Innalillahiwainnailiyahi rajioon.

Egypt’s Internet Shut Down, According To Reports– for the first time in internet history-here is a blog about the technicalities.  Many fear what will happen without connection between organizers as Egyptian Army has been deployed ahead of the protests scheduled for after Jummah.  Veteran activists are working with the youth spreading techniques from pre-digital days.

Protests scheduled in front of embassies in Beirut, London, Istanbul,Paris, Jerusalem, Los Angeles, Houston, Sacramento,  amongst other cities around the world.

Al-Jazeera a common link in Arab frustration? Vice President Joe Biden say Hosni Muabarak is no dictator but he needs to be responsive to the legitimate concerns of the Egyptian people, on PBS Newshour.

While this post is primarily news updates- please follow the discussion in comments on the Islamic validity of revolt. 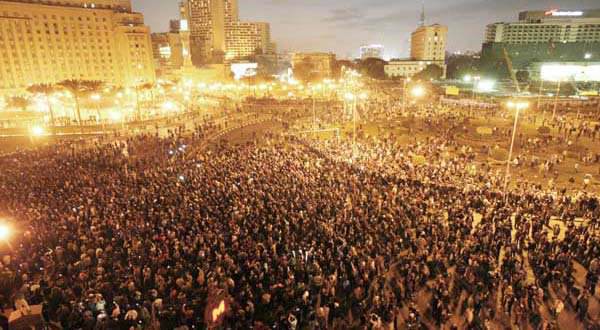 Hundreds of thousands of Egyptians take to the streets all over Egypt, protesting the oppressive regime and its tyranny. People demonstrated with the utmost civility, shops were still open, and no looting or violence was reported!  Demonstrators clearly stated their political demands: freedom of expression, free elections and rule of law.  There are reports of police officers joining demonstrators.  The protests were organized using facebook and twitter but internet access is being disrupted there so their twitter accounts are blocked. Electricity is cut off and mobile networks are disabled. According to tweets coming in protesters did evening prayers on the streets in front of the police. For more pictures 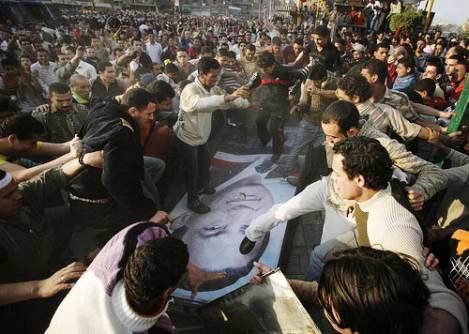 20,000 guards are guarding the presidential palace of Hosni Mubarak. Will this be the next Tunisia? Please keep our brother and sisters in your duas. Their optimism may be short lived as reports come in of a brutal police crackdown-

Horror as riot police, and perhaps the military, have begun to brutally crack down. So far, the only reports from the protest are on Twitter; they are preliminary, unvetted, and may turn out to paint an incomplete picture. But they portray a sudden and violent response from police, as well as possibly the massive Egyptian military, which is paid for in part by over a billion dollars in annual U.S. military aid. (The Atlantic)

Police have responded with batons, water cannons and tear gas in a bid to quell the crowd. The demonstration, said to be inspired by the uprising in Tunisia, began peacefully before clashes occurred.

• As night falls in Egypt protests have also broken out in the Mediterranean port city of Alexandria. Roads are also being blocked by demonstrators in the Sinai Peninsula, and large rallies are being reported across the Nile Delta and the Suez Canal region.

• US Secretary of State Hillary Clinton has said Mubarak’s government is stable despite the demonstrations. Mubarak is an important US partner in the Middle East. 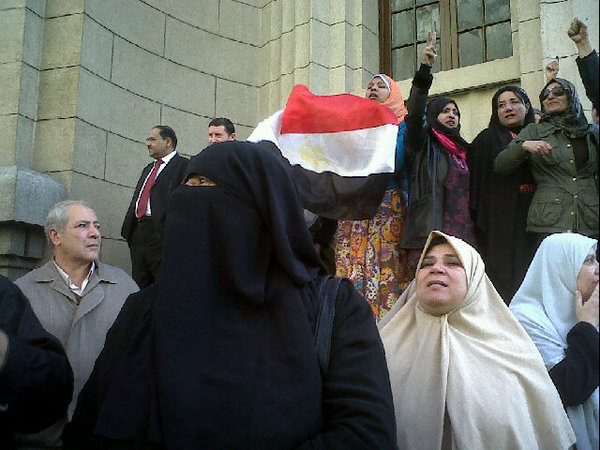 Mother and Sisters of Egypt asking where is the media?

This is being called Egypt’s Tiananmen Square moment

Update IV
Teargassing the protesters in the middle of the night- whole Tahrir Square is a cloud of smoke.  More than 50 cannons fired. Thousands are fleeing towards bridges.

Update V: Atleast three people have died in these protests, a policeman and two protesters. The fascinating aspect in this has been the use of technology in world changing events. Despite the efforts to remove all means of communication and dismal local media coverage , protesters managed to get their message out to the world using twitter.   As the crowd grew, a police officer, who might in the past have responded with his baton, instead took out a camera and snapped a photo. Whatever was happening, he wanted to record it rather than to stop it.” . In the age of the internet the will of the people was apparent to all who were surfing. This was the facebook page where the protests were organized under the banner Youm as Thawra, ironically  Hosni Mubarak made January 25th a national holiday as Police day just last year. So far its seems like this movement has no leader, it is a culmination of youth inspired by Tunisia and activists’ 6 year momentum against the regime. Tweets included tips on lessening effects of teargas with Vaseline and onions and pictorial chronology of the event by observers. Latest tweets report live ammunition is being used on the protesters.  Tonight, we will watch President Obama’s State of Union address and  see if he will lend his support to these young people who are rising against their leaders.

as Ben Wedeman of CNN tweets

As the crowd grew, a police officer, who might in the past have responded with his baton, instead took out a camera and snapped a photo. Whatever was happening, he wanted to record it rather than to stop it.”
Share67
Tweet
WhatsApp
Reddit
67 Shares