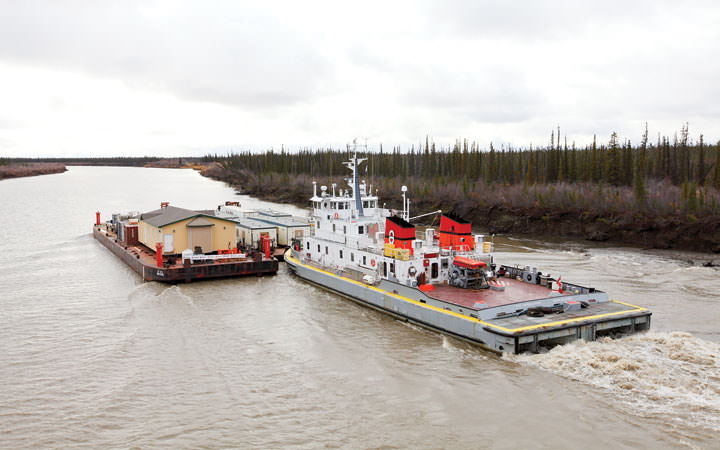 While most people were preoccupied with the Park51 debate and the American Muslim community battled a slew of Islamophobic attacks, a different story, a more hopeful one, developed north of the border. Quite a bit north actually, about 4000 kilometres north to be more specific. This is the story of a new chapter in the lives of the Muslims in Inuvik, Canada.

Inuvik is an arctic town in Canada’s Northwest Territories with a population of about 3500 people. It is located right at the tip of North America facing the Arctic Ocean. With a polar climate and harsh living conditions, one wouldn’t expect to find a town there, let alone a town with Muslims. But there is a Muslim community there and a growing one, too. So much so that the trailer that was being used as the mosque ran out of room and this community now needed a new mosque.

Building a mosque in the Arctic, however, is far more complicated than it is anywhere else. The scarcity of skilled labour and material makes the cost of such a project skyrocket and this undertaking is simply impossible for a small community of a 100 people. Their situation is akin to that of the Muslims in Edmonton, who despite all odds managed to erect Canada’s first mosque in 1938. With faith in God anything is possible. At a time like this, the Inuvik Muslims could have simply prayed for a mosque to be shipped over. And that is exactly what they were about to get.

Enter, the Zubaidah Tallab Foundation. The Zubaidah Tallab Foundation is a charity based out of Manitoba. The remarkable individuals at this organization decided to give the Inuvikans a hand and took it upon themselves to ensure that the mosque got built. After evaluating the cost of locally building the mosque, they came up with a plan which at first sight would easily be dismissed as insanity: build the mosque in Winnipeg and ship it 4000 kilometres away to Inuvik in the Northwest Territories. 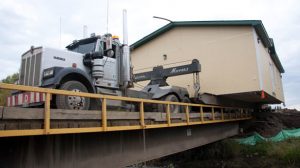 As insane as that may sound, this was the most economical way of getting the mosque built. Part of the mosque’s journey was going to be on roads (2400km) and part on water (1800 km). The goal was to get the mosque on to the last barge heading towards Inuvik for the season. Not only was this going to be a logistical nightmare but it was to be a race against time as well. With receding water levels in the Mackenzie River, the shipping company decided to push up the departure date by 3 weeks. With only three trips a year to Inuvik, missing this barge would mean waiting till next June to ship the mosque.

The 1500 square-foot mosque was built in Winnipeg and started its journey on a semi-trailer. The over-sized trailer made its way through back roads and country highways, struggling to make it to the barge in time; it was delayed further by Labour Day celebrations and highway regulations. To complicate matters even more, the bridge across Reindeer Creek proved too narrow for the trailer. The driver had to remove the back wheels and a second truck was brought in to balance the back of the flatbed as the mosque was moved carefully across bridge. But this wasn’t the biggest scare. All hopes and dreams came close to being shattered when the mosque tipped and almost fell off the trailer into this creek near the Alberta border.

The organizers managed to request the shipping company to hold the barge for two extra days and perhaps by divine intervention, the barge was delayed further due to poor weather. With lots of prayer and a little bit of luck, the trailer managed to get to the barge just in time. The mosque was loaded on to the barge and set off for its journey towards the North Pole.

The barge arrived in Inuvik, on September 24th2010. After an excruciating 3-week journey, the little mosque arrived at its destination; all in one piece. The Inuvik Muslims gathered around the port to witness the historical event. They chanted prayers to praise and thank God as they waited. Some jumped around with joy while others were overwhelmed with gratitude and came to tears.

Numerous finishing touches needed to be added and it took about a month to get the mosque ready for use. Fathallah Fargat, a carpenter from St. Catherines, Ontario was inspired by the story and traveled all the way to Inuvik to help set up the mosque. He even helped build a 10-meter minaret to accompany the newly erected mosque. The Midnight Sun Mosque, as it is now called, was inaugurated on November 10th 2010 to become North America’s northern most mosque. All in all, the entire project cost about $300,000. The Zaid Tallabah Foundation, which still has outstanding payments to make, is looking to raise another $21,000.

The Inuvik mosque is a stellar example of what can be accomplished by unity, hard work and faith in God. For those let down by the petty attacks on mosques around the West, this story should rejuvenate your spirit and give you hope. If people can manage to build a mosque in the Arctic, then building one anywhere else should be far from impossible.

[Update April 27th 2014] – CBC released a full documentary on their website capturing the journey of this mosque. See here

Below is a video of the mosque being moved (music-alert):

Charity Week 2010: Muslim Students in the UK Show the Power of Unity