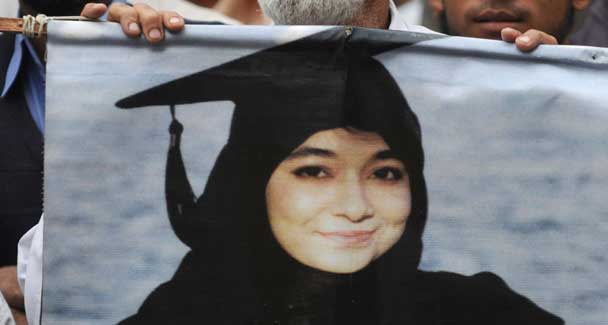 I prayed two rakah salah before writing this – I wrote it after her sentencing but honestly have not had the guts to publish it. I have been scared by friends and relatives – paranoid in these times of guilt by association – ‘Don’t write they will come after you too” For what? writing a blog entry. Fear is a strange thing…Allah

may I never be fearful of anyone but You… Ameen.

She set up the table and pressed play. Tugging at her floral scarf, she instructed me to let the video run until the end.  It was a documentary on the atrocities being committed in Bosnia. Her kind, confident voice soothed my anxiety. It was my first time manning the booth in Slater Hall on the Wellesley campus. Next to us was a Native American lady selling silver jewelry. She handed us some extra pamphlets and waved goodbye.

Sister Aafia, the sister I remember was the heart behind the MSA of Greater Boston. I was a first year student at Wellesley College and my future husband a sophomore at MIT.  She was the one who would make hundreds of samosas to sell at MSA fundraisers.

A passionate activist, she struggled to find Muslim homes for the hundreds of Bosnian orphans that were brought to the U.S. I could relate to her then, I spent my childhood in Africa, too and like her had come to study in the U.S. from Pakistan. She was one of the first women I had met who was brilliant, educated, ‘religious’ and a hijabi – not many those around in the 1990s. Pakistani women had been ‘liberated’ in the seventies and eighties, nobody my age, in our social circle, covered. Most women who covered then were older grandmothers or TV anchors forced to cover under General Zia.

They make her sound so scary, ‘neuroscientist’ sounds ominous when linked with chemical warfare. Brandeis has a world-renowned school for neuroscience where she studied behavioral sciences, her concentration was children.  Our paths diverged, we both left Massachusetts and for years, I did not hear of her. I was visiting Pakistan and heard about her abduction in the newspapers.  Sheikh Rasheed was the then Interior Minister in Pakistan and he claimed (on television) to have no knowledge of her kidnapping. An internet search of her name revealed her familiar face but on the FBI’s most wanted list.  How did she end up there? The shock of seeing her face still gives me shudders. It is so hard for me to believe that someone like her could have become entangled in anything so terrible as the crimes they accuse her of.

This was 2003, I had just had my second daughter. Her child, Suliman would have been my daughter’s age, 7. It gives me chills thinking about what happened to that poor child, to this day no one knows.  She was missing for 5 long years; her family believes that those years were spent in underground prisons. Why, why her? Could what happened to her, happen to any one of us?

Recently, she was tried in a court in Manhattan. Her sentence is for eighty six years – how long is that?  Slightly, less than a century. We will all be dead before that date rolls around. 86 years ago for attempted murder where no one was hurt except for her. When she was arrested some of us foolishly hoped that at least now she was in the hands of the American justice system and the chances of her being released were higher. Eighty-six years!!  I tried to find who else had been meted a similar sentence but was led to an unfruitful search of child molesters and dads who murders their kids. Even if she is guilty of the worst of what they accused her of – EIGHTY SIX years?

As she was not charged on any count of terrorism, her judgment was based solely on her  “attempt at murder,” but she was given a terrorism enhancement on her sentence. This case will go down in the books of major law schools on the effect of political influence on the judicial system. Aafia’s lawyer described Aafia’s cell, “a small concrete block, no light, no windows… She reminded all Americans that one day “We’re going to look back in history and see what drove Aafia’s sentencing—fear, instilled and practiced by its very own government. We want to punish her more because of fear.”

To further rub salt on her wounds, the same judge who declared her mentally capable of standing trial then insisted on sending her  to Carswell Prison, a mental institute, notorious for rape and medical neglect, where 100′s of women have lost their lives under “questionable” circumstances.

I am reminded of Prophet Yusuf’s [alays]  trial and his term served in the prisons of ancient Egypt – I pray that as Allah’s mercy intervened for him, it too will intervene for Aafia.  As he was rewarded for his patience and constant faith, may she also be elevated in her ranks.  How can I make this comparison, if I was not a witness and have no idea to her state of mind. I read eyewitness accounts of her cruel verdict – they speak volumes of her character.

She reminded the judge, “No one here is in charge of my sentencing except for Allah. None of what you all decide for me matters. I am content with Allah’s decision. I’m happy and you can’t change that. All thanks to Allah.” This should shake any human to the core regardless of your religion or political inclinations. The jury did not even find her guilty of firing a weapon.

“If you want to save humanity, get rid of child imprisonment.  Help other innocent prisoners. Don’t waste your efforts and money on me. The money you spend on me is not used for your desired change. Lord knows what happens to that money. I’m stuck with these people as my decision-makers. You won’t get to alleviate my conditions. But I’m very content as is. Don’t cry over my case. God wants me to survive so I am here.”

“At the end of an out-of-this-world hearing, when the judge was wrapping up his 86 year sentence, Aafia brought up the 6th verse in the 49th chapter of the Quran, ‘O you who believe! If a rebellious evil person comes to you with a news, verify it, lest you harm people in ignorance, and afterwards you become regretful to what you have done.’ She then asked all the people present in the court and her supporters outside of court that they have mercy on and forgivethe prosecutors and defendants and Judge Berman. It seemed almost like Judge Berman was mocking her when he said, ‘I wish more defendants would feel the way that you do. Enjoy your life, Dr. Aafia.’” (justiceforaafia.org)

She urged Muslims not to hate American soldiers. After being held, broken, physically, mentally, psychologically, a travesty of her former self, the torture etched in her face, she still is able to forgive them and urges us to forgive them, too.  Learning this make me ashamed of my own shoddy, spiritual state compared to her.  She has so much forgiveness in her heart despite being caged and I having so many luxuries at arms length; can kiss my children whenever I want, hug my sisters, talk my brother, yet I am so weak.  I have a hard time forgiving someone who harms me by backbiting or hampering my work. I wonder in our separate journeys, who is better off?

Some words from her brother, Muhammad, whose experience in the US has been very different from his sister’s and who is still waiting for American justice to prevail.  Despite many attempts to visit her, he has been told that “our normal rules don’t seem to apply to your sister.“ She is isolated, although she has retained a new lawyer but has not been allowed to contact this person. She is told that her brother has not made the arrangements to see her.  Imagine the emotional havoc on her soul, making her think her family has abandoned her, too.

“In the end you had a judge pronounce an 86 year sentence but it was Aafia who calmly offered him forgiveness and he almost greedily accepted it and thanked her for it.  For a moment one could be excused for wondering who was lording over whom?  This was not unexpected but by quantifying the number of years, I think Berman inadvertently fueled the passions in Pakistan.  A life sentence in Pakistan generally means 10-14 years and in political cases commuted in a couple of years.  People would not have been as upset had he given her life but 86 is an undisputed mathematical number and is a large number.  The reaction was therefore much stronger and in an odd way, Berman provided the momentum that we all thought would be over.  Now the emotion has shifted from guilt or innocence to the sheer brutality and total lack of compassion for Muslims. TV channels are on a countdown to 86 years, and children put on school plays in elite English-medium schoolsabout Aafia’s legend – every day people will be reminded.”

I pray that Americans join in the demands for her repatriation back to Pakistan – send her back to her home country where her aching eyes can at least see her children through the bars. 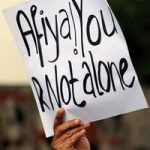 Many people go through trials and tribulations during their lifetime. Scholars say, that to see whether the trial is a test from Allah

or a punishment from Allah

, you must do muhasabah (ask yourself is this bringing me closer to Allah or away from Allah?) Judging solely by her remarks made in court, I can say I believe this is a supreme test from Allah

for Sister Aafia – her iman unwavering, her night filled with visions of the Habib

Imam Zaid Shakir | Letter to would be Mujahid