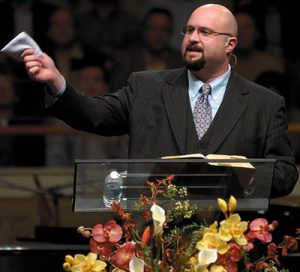 Not that long ago, Turks seemed to be all over the news. Their overwhelming presence was mostly due to the massacre of the freedom flotilla humanitarians by the phalanges of the only apartheid regime in the world that we are all obliged to consider a true lighthouse of justice, or else we are anti-Semites. But there was another item in the Turks-in-the-news category that received a lot of attention, despite roughly coinciding with the events surrounding the flotilla massacre, which implies it contained much of what the media considers worthy reporting about these days, namely conflict, religion and dirty laundry. Of course, I am talking about the revelations that one of the pioneers of “hate-filled Muslim ‘extremist’ turned loving Christian” (and sharing his/her story in a book with a two digit price, shipping expenses not included) industry, Ergun “Mehmet” Caner, was being exposed as a fake. A man who decided to re-write the first chapters of his life before starting a new one. Most Muslims are familiar with this Baptist preacher and scholar who claims, according to the still present biography on his website, that he was “raised as a devout Sunni Muslim along with his two brothers” and  “converted (to Christianity) in high school.”

As a scholar, Caner has authored a number of books critical of Islam, purporting to “expose” its true nature and reveal “secrets” hidden from the sight of naive an unsuspecting Christians and has appeared on a number of shows presenting the same message. According to Walid Zafar of The Huffington Post: “After the 9/11 attacks, when many Americans were searching for answers, Caner stepped up with enthusiasm to present himself as an expert on Islam. He used his own “personal history” (much of it since demonstrated as bogus) to confirm his audience’s deeply-held suspicions about the faith that many of them blamed for the attacks.”

I came to know about Caner in a similar fashion, while browsing through amazon.com some years ago and running into one of his books about Islam, the title of which I cannot remember precisely now. What I do remember is the triumphant mood of many Christian reviewers who were strangely thrilled and overjoyed by the newly discovered fact that the world’s fastest growing religion, and the religion of probably some of the people they know personally, is evil (since that is what the book seems to have been all about); sadism at its strangest. After the 9/11, his rise appeared to have been unstoppable, peaking with his appointment as the dean of the late Jerry Fallwell’s Liberty University Theological Seminary in 2005, which since has tripled the enrollment of students to approximately 4000. But soon, the true story about the Caner clan began to unravel. Ironically, it began to unravel around the same time Caner was accusing fellow Christian missionaries of “heresy” and, ahem, lying for using a deceptive missionary tool called the “camel method” to convert Muslims.

The taking down of Ergun Caner was prepared by none other than himself; he made reckless omissions in his testimonies, gave contradictory statements about different details of his and his brothers’ lives, and never missed an opportunity to exhibit how ignorant he truly was of anything related to Islamic teachings of theology. But since his message was pleasing to his audience, it took what the media likes to call “an unlikely coalition of Muslim and Christian bloggers, pastors and apologists” to connect the dots. Representing Muslims in this unofficial coalition was a brother from England named Mohammed Khan, the man behind the now legendary website fakeexmuslims.com and a series of ingeniously crafted videos dissecting and analyzing many of Caner’s attempted frauds to the smallest detail. Christians were, for the most part, represented by James White, another Christian debater well-known to Muslims, and blogger Debbie Kaufmann; what’s important to note is that they’re both Calvinist, which helps to explain their conflict with Caner, who seems to have been highly critical of Calvinism, once even saying that “Calvinists are worse than Muslims.”

The results their diligent excavation effort yielded were fascinating; in short, almost all of what Ergun ever said of his Muslim past was false. Walid Zafar provides us with a sample of his greatest testimonial hits:

“The main problem with Caner’s journey from Jihad to Jesus is that much of it is fiction, a complex lie made up to give his conversion more authenticity. He fabricated almost everything. For someone who allegedly fought jihad, Caner’s understanding of the very basic tenets of the faith he is a so-called expert in is rudimentary.

Caner does not know the difference between Islam’s article of faith and the first chapter of the Qur’an. He’s claimed that the lunar month of Ramadan lasts for 40 days. In his book, he writes that he performed all of the rakats (daily prayers). The actual word is salah. It’s not a difference most people would know, but he says he is an expert on Islam. Muslims, he once said, followed something he called the “tobaad.” He’s claimed to have debated Muslim scholars who’ve never heard of him. Court records from his parent’s divorce indicate that he was in Ohio when he was a young child, long before his alleged move from Turkey. On his books, his middle name is Mehmet (Muhammad in Turkish), yet it is listed as Michael on his concealed-weapons permit in Virginia. Before 9/11, he went by E. Michael Caner.

In one speech, Caner told a crowd that outside the mosque in Kabul there was a sign that read, “Do not teach the women to read and write.” The story may or may not be true, but Caner, to give authority to the tale, told the crowd what was written in the native tongue: ‘bahasha uwtara muwtara seeteeroh.‘ That’s neither Dari nor Arabic nor Urdu nor Turkish nor Pashtu. It is an entirely made up language.”

Revelations such as this one (and as attested by the materials available on the websites linked above, there are many more interesting details in this story) were too much for his employers; Ergun Caner was demoted from the position of the dean of the Liberty University’s seminary and stopped performing this duty as of June 30,2010 when his contract expired. According to a statement from the Liberty University, “… a committee consisting of four members of Liberty University’s Board of Trustees has concluded that Dr. Caner has made factual statements that are self-contradictory… Dr. Caner’s current contractual term as Dean of Liberty Baptist Theological Seminary expires on June, 30, 2010. Dr. Caner will no longer serve as Dean of Liberty Baptist Theological Seminary.”  The story of the demise of Ergun Caner has thus been brought to its conclusion, at least for the time being.

But there is one element of the story that, no matter how it further develops, will never change. It refers to a very significant correlation between anti-Muslim bigotry and eventually ending up being disgraced. You see, Caner’s case is just one in line of many examples of Islam-bashers and opposers being exposed as intellectual and moral frauds. They tried to take a shortcut to fame and iconic status by spouting lies and misinformation about Islam, and presenting their ignorance about it as expertise, of which his case is probably the best example. The list of previous victims with similar autopsy reports is long and continues to grow. Most Muslims are familiar with a man named Jimmy Swaggart, a Christian preacher and debater who became implicated in two scandals with prostitutes and behind-the-scenes scheming against his fellow pastor Marvin Gorman from the “Assemblies of God” denomination (who was, by the way, also involved in a scandal involving a prostitute). He is also famous for debating Shaykh Ahmad Deedat who put him to shame, eventually forcing him to resort to cheap tricks and emotional manipulation during their debate.

Another fellow who felt sorry he met Shaykh Deedat is Anis Shorrosh, a Palestinian-American missionary. Apart from his plain dishonesty, fondness of lying and deception, which he generously displayed in pretty much all of his talks, debates and presentations on Islam, this chap became well-known for trying to burn down Loma Alta Towers by using an accelerant to set a trash can in the building basement on fire. Remember Walid Shoebat, another pioneer of the Muslim “terrorist-turned born-again Christian” industry? He’s also being exposed as a fake and an anti-Muslim crusader for money by some of the fiercest enemies of Islam who have obviously concluded that supporting such a blatant fraudster is more damaging to their cause than not using him. Another Walid, Walid Salameh, is treading a similar path, being exposed as a fake PLO member.

Kent Hovind, a Young Earth Creationist who claimed that the Catholic Church invented Islam, is serving a ten year sentence after he was convicted of 58 federal tax offenses and related charges. Finally, I cannot but mention Ted Haggard, who, before being caught with a male prostitute and found to be using crystal meth, tried his luck in the Islam-bashing genre by saying, among other things, that “a close study of the Quran makes very clear the violent spirit fueling what is being spun as a ‘peaceful religion’.” And, to remove all doubts about his expertise and breadth of knowledge about our religion and developments in the Muslim world, claiming that most of the “radical” Muslim leaders were trained at the famous Al-Hazar (sic) University in Egypt.

The list is longer, and, as said before, continues to grow. But the conclusion drawn from these examples is the same, and strikes with relentless clarity and revelatory power. It is perhaps best described by a short, but concise, sentence, the third verse of surah Kawthar (the shortest chapter of the Qur’an): inna shani-aka huwal-abtar; For he who hates you (Muhammad, s.a.w.s.) – he will be cut off.

Women’s Rights in Islam, a critical look at “Joys of Muslim Women”