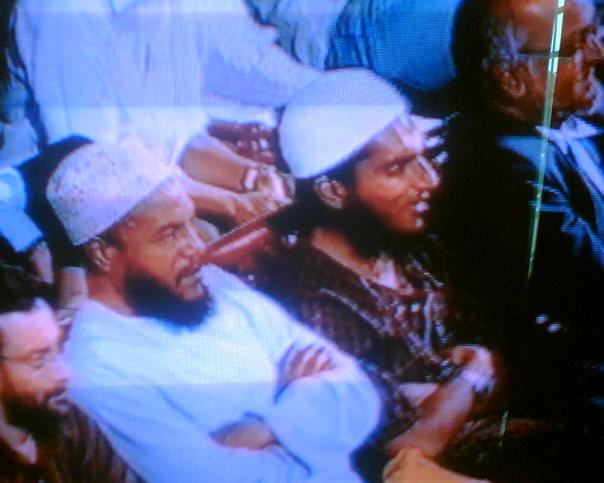 I began thinking of the people who have had the most influence on my understanding and practice of Islam. I have been searching for the true understanding of Islam since the age of sixteen and since that time, many people have influenced me in different ways. I began to realize that nobody is perfect and you will find things you disagree with in everybody you meet so instead of looking for the perfect scholar, I started taking the best from everyone.

So here are my Top Ten people who influenced my understanding and practice of Islam, note that I do not agree with everything each of them says or believes but I can not deny the positive influence they have had on my life:

The one thing I love most about Yusuf Estes is that he is one of those people around whom I feel Iman in the air. I can’t explain it but it’s almost as if I can feel the angels of mercy near us whenever I am with him and my heart begins to feel at ease. He influenced me, mainly by teaching me to appreciate Islam and treasure it.

Also he is the first person to ever call me Abu Muawiyah, although he probably doesn’t remember it. I also love his sense of humor, his lectures are hilarious!

Another funny guy, Baba Ali has taught me so much through his video blogs, and I am sure I am not alone in saying that since he has over 5 million video views and has made the Top 500 most influential people list at such a young age. Most importantly, he taught me that we can be cool, funny and enjoy life without compromising our deen, and he has shown me the funny side of the problems facing the ummah. When choosing topics for my own lectures, I tend to look at topics he has discussed in his videos.

Yasir Qadhi taught me tolerance and how to deal with people who have different beliefs in a civilized manner. Thanks to his influence, I am now a lot friendlier to people from different groups than I was back when I first started discovering the incorrect and wrong beliefs I had been taught by some of my teachers, so he gets props for helping me become a nicer guy. I also benefited greatly from his lectures on Aqeedah.

I love this man or the sake of Allah. I love his charisma, his style, his humor, his knowledge, his poetry, his hairstyle and most of all I love his manners. He is my role model in good manners and I want to emulate his nice and friendly manner of treating people. I am lucky enough to have studied two Al-Kauthar courses under him and wish I could spend more time with him. If a new Kamal El-Mekki lecture is released online, be sure I am one of the first to download and listen to it.

My first exposure outside the Deobandi school of thought was through Yusuf Al-Qaradawi’s book Halal and Haram in Islam. At that time, I hated the book and couldn’t believe the fatwas he gave as his understanding was completely opposite to how I had been taught and raised. Now seven years later, I’ve read the book again and find that much of what he said was correct, I just didn’t know it back then.

Of course, there are still rulings in that book that I disagree with but no where near as much as I did before. Al-Qaradawi influenced me by making me question, think outside the box and realize the diversity of opinions in this ummah, and that what I was raised with is not necessarily correct. This man is number 9 in the list of the Top 500 most influential Muslims of our time.

Why is a nasheed singer so high on my list? Because he influenced me long before I was old enough to listen to lectures. I grew up with nasheeds by Zain Bhikha and Dawud Wharnsby and these were my substitute for Haraam music. Alhamdulillah, these songs helped shape me into a better young Muslim. My children are luckier, in that they can grow up watching “Enjoying Islam with Zain and Dawud” (A new children’s TV show on PEACE TV) and benefit even more from them.

When I met Zain Bhikha at the Peace Conference in Mumbai 2007, the one thing that struck me about him was his humility. He is just such a nice down-to-earth guy. If you met him on the streets, you would never guess that he is a world-renowned singer or one of the Top 500 most influential Muslims. His humility would shine through every time I saw him, especially when I saw a picture of him teaching underprivileged children in South Africa while sitting happily on the floor in their house. No matter where I go in life, I want to be as humble as him always, if not more. I am also inspired by all the social work he does.

I couldn’t decide which of these two singers should be higher on my list, but I chose Dawud for two reasons. Firstly, my oldest Islamic memory is listening to “Animals Love to Hear Quran” and “Sing Children of the World” when I was six years old, so his influence predates that of Zain Bhikha. Secondly, I benefited from his lectures as much as I did from his songs, so that gives him an edge over Zain.

I may not agree with everything Dawud believes but the main thing he taught me was the beauty of just being a nice person and the effect that can have on others. Every time I look at Dawud, I think he is such a nice sweet sincere man and I want to be like him in that sense, so Dawud has influenced my character. He also taught me not to judge other people’s intentions and to look at the good in others. This has helped me greatly in developing into a better person.

He is number 19 on the Top 500 most influential people of our time, and he has influenced me greatly. I did not know much about him before he visited South Africa in 2008, but when I attended his lectures, my mind was opened to new ideas. I found myself spending many days reading his books and his articles on his website Islam Today. His influence has helped me develop and move away from extremist tendencies into a more peaceful and loving understanding of Islam. I use to believe some extreme things about Jihad but this man’s lectures, books and articles taught me the balanced understanding and the peaceful teachings of Islam.

Ahmed Deedat answered questions that were burning in my mind since the age of seven, “How do we know our religion is right and the others are wrong?” It was Deedat’s debates and lectures that answered that question satisfactorily and that led me to believing in Islam wholeheartedly, rather than just as the religion of my forefathers. Deedat influenced me in other ways as well.

Allah used Deedat to light the fire of Dawah in my heart at the age of sixteen and since then I have never stopped performing Dawah. Deedat always emphasized that we must read the Quran with understanding and that led me to doing so which opened up a whole new world of Islam to me. Deedat’s life story also showed me that if I wish to follow in his footsteps I must be prepared for tough times and tests from Allah.

As you can see, Ahmed Deedat had the biggest impact on my life except…

Before meeting Dr Bilal, I had no principles and no direction, I was seeking the truth but had no clear method of finding it. Alhamdulillah, through his IOU (Islamic Online University) and my personal meetings and studies under him, I was able to learn the pure Aqeedah of Islam and the principles of Aqeedah, Fiqh, Tafsir and Hadith, which gave me the foundations to grow and guidelines to follow in my study of Islam.

In the end, I have listened to more lectures by him, read more books by him, completed more courses under him, spent more time with him and asked more questions to him than any of my other teachers. That is why he deserves the number one spot on this list.

I hope you enjoyed and benefited from this list. The purpose of this list was to highlight the people that have influenced me so you too, can be influenced but remember nobody is perfect and many of the people on this list have some beliefs or opinions that I might disagree with, but in the end their positive impact on me overshadows their faults by far.

I ask Allah to reward all of my teachers and anybody who has assisted in making me a better Muslim and to forgive all of their mistakes and sins, and to unite us with them in Paradise when the time comes. Ameen.