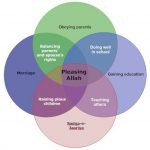 I love Fridays. So much so that on Mondays I’m already eagerly awaiting the arrival of Friday. Sure, Fridays signal the fun planned for the weekend. But for me it also holds another very important aspect. This is the day I get a chance to hear my husband’s khutbas, either at his campus or at a masjid. Before preparing for it, he sometimes asks me, “So, what do you think the topic should be today?” Without hesitation the same response comes to my mind almost every time, “Innamal a’maalu biniyyaat!” meaning “Verily, actions are judged by intentions”.

This one hadith has affected me to a great extent. It is a line, a philosophy, which one must always bear in mind – every passing second of their life. Other ahadith we learn are also extremely important, but they come into play based on the situation at hand. Keeping our intentions in check, however, should take place all the time. It’s an ongoing, lifelong process, one where we need to remember that even if others can’t read our thoughts, Allah (SWT) always can.

What this hadith demonstrates first and foremost is the mercy of Allah (SWT). The outcomes of many situations are often not in our hands. All we can do is make an intention and follow through with an effort, but we never know whether things will turn out as planned. However, this hadith proves that what matters to Allah (SWT) are our intentions. Because that is the only real thing we have control over.

Another blessing derived from this hadith is that we can make any mundane or worldly activity into an act of worship, just by thinking about doing it for the sake of Allah. We can even have multiple intentions for one thing, and insha’Allah obtain the reward for all of them! For example, we, as students of sacred knowledge, can make intention that we are studying for the sake of Allah (SWT), to please Him. An intention can also be to correct previous mistakes made out of ignorance, and to learn new material in class for the purpose of dawah. There can be an intention of teaching our children what we’ve learned, making the process into sadaqa-e-jaariya, which is rewarding even after death.

Also, we can make our entire dealings with others a form of gaining rewards if we are conscious of Allah. The way we behave with our parents, siblings, spouse, children, neighbors etc. can all become ajar if it’s for the sake of Allah, and if we follow the sunnah. We can change any activity which has little value into something which would be considered ibadah. When drinking water, if we sit down and drink in three intervals, it becomes a sunnah.

There are also duas for practically everything, which we should strive to learn. There are duas for sleeping, waking up, eating, performing ablution, wearing new clothes, traveling, entering or leaving the house and so many more! These everyday activities, ones we barely pay attention to, could instead increase abundantly in barakah and reward if we only learned to recite the supplications for everything. We can make small acts a form of worship. If we are taking a shower with the intention that “Purity is half of faith”, it becomes an ibadah. If we brush our teeth thinking “The tooth-stick purifies the mouth and pleases the Lord”, it’s a means of earning reward. When greeting someone and saying salam, if we think “The one who initiates salam is free of pride”, we acquire Allah’s pleasure, insha’Allah.

We need to however, be cautious and always remember who our actions are intended for, because this can work the other way as well. On one hand, if we make intention to please Allah, we are going to be rewarded based on that. On the other hand, if we do good deeds in order to show off to others around us, that deed becomes reduced to something worthless.

A person may be a scholar of the deen, or he may be a martyr, or he may be giving an abundant amount of wealth to charity. After making so many sacrifices, if his intentions are to show off, nothing will count. On the Day of Judgment, it will be said to them that it was primarily people they wanted to please in the worldly life, and so they received their reward in the world. What we need to realize is that people come and go, but Allah is Eternal. To Him is our return. Obviously, we are supposed to please people, but with the intention of pleasing Allah (SWT). We get what we ask for – if we seek fame and glory in this world, that is what we will get. But if we ask for Allah’s pleasure, which, in my opinion, automatically leads to more respect in this life as well by following the Quran and Sunnah completely, then insha’Allah that is what we will get. We need to ask for the best in both worlds, as mentioned in a dua in the Qur’an, “Our Lord! Grant us good in this world and good in the hereafter, and save us from the chastisement of the fire” [2:201]

This is why we need to apply another hadith in our lives, “To seek sacred knowledge is an obligation on every Muslim”. Only when a person learns about these details in Islam will he be able to get closer to Allah (SWT). “A single jurist is more severe on Satan than a hundred worshipers”. Why is this? Because the more knowledge we gain, the less likely we are of getting tricked by shaitan. Ilm is noor – it is spiritually enlightening, and illuminates our hearts. If we didn’t know that our actions are judged by intentions, it would be possible to spend our whole lives worshiping Allah with wrong intentions, and everything would have gone to waste.

Or another scenario could be that a person does something unlawful with a supposedly good intention, because he does not have the proper knowledge. He may steal to provide for his family, thinking it’s something good. Or he may park his car in such a way that it blocks other cars while he’s at the masjid, and he may think it’s rewarding. We need to remember that apart from huquq-Allah, we also need to take huquq-al-ibaad into consideration, which is the rights of other people. There needs to be a balance. It is proper knowledge that leads to an understanding of what proper intentions are.

Allah is Merciful, and He does not want hardship for us. However, we need to remember that His quality of being merciful does not give us that extra margin to knowingly commit sins while trying to rely on his mercy. This hadith demonstrates that if our intentions are evaluated regularly, we can easily seek rewards, and attain closeness to our Creator, which is ultimately the biggest reward. Allah’s (SWT) compassion is further portrayed in another hadith about intentions, which shows His immense love and mercy for His creation.

Abdullah bin ‘Abaas (peace be upon him) reported: The Messenger of Allah (صلى الله عليه وسلم) said that Allah, the Glorious said,” Verily, Allah has ordered that the good and the bad deeds be written down. Then he explained it clearly how (to write): He who intends to do a good deed but he does not do it, then Allah records it for him as a full good deed, but if he carries out his intention, then Allah the Exalted, writes it down for him as from ten to seven hundred fold, and even more. But if he intends to do an evil act and has not done it, then Allah writes it down with him as a full good deed, but if he intends it and has done it, Allah writes it down as one bad deed. [Al-Bukhari and Muslim].

May Allah (SWT) give us the tawfiq to remember that “Verily, actions are judged by intentions” prior to doing any act, big or small. So if you happen to go to a Friday khutba and the topic turns out to be “innamal a’maalu binniyaat“, make sure that every detail is absorbed, because this is one topic for which we are always in need of constant reminders!

Yahya Ibrahim | To My Children