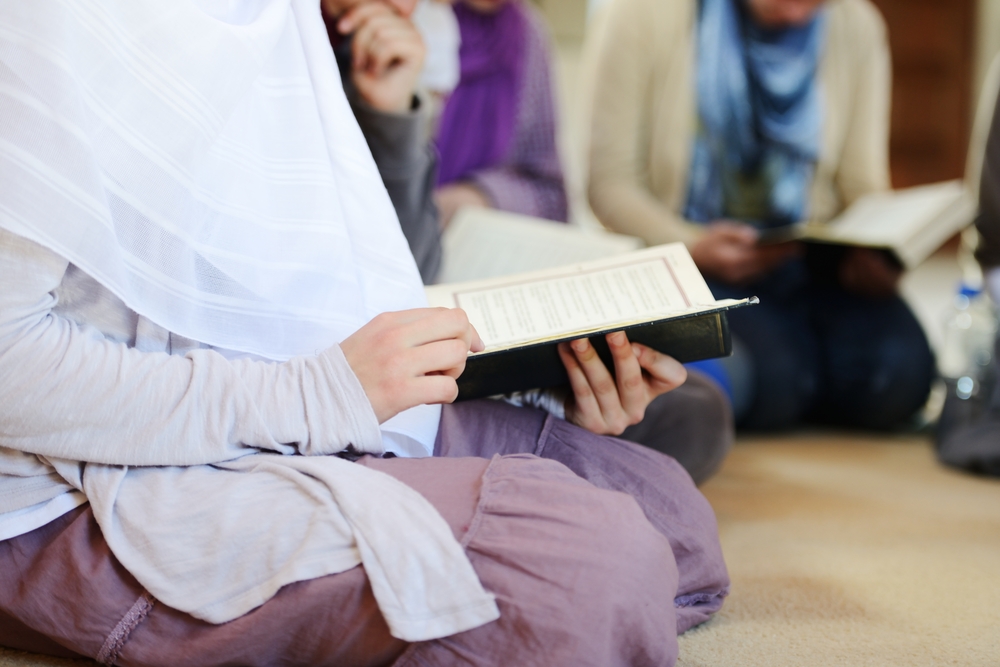 Cross-posted with permission from wood turtle.

We’ve all been there at least once. In the corner of a dusty and briyani-debris ridden floor. In the windowless basement. On the second floor, inaccessible balcony with frosted viewing windows. In the front room of a house, with boarded up windows and a tv projection. In a barren false room with a tv projection. Behind a curtain. Under the stairs next to the janitorial closet. Behind a wall. In the room across from the morgue. In the back, past the garbage collector, up the fire escape, down a long hallway, up the narrow stairs, and finally into a room that doubles as a classroom and has 20 screaming Sunday school kids with an overworked male Arabic teacher who expects you to wait outside until he completes the lesson.

And some of us have just been turned away at the door.

Navigating terrible, inhospitable, and downright hostile space for women in the mosque is nothing new. There’s even a movie on the subject. Not every mosque is like this, but a good majority are.

Constructing woman-friendly spaces depends on whether or not women sit on mosque administration boards, is sometimes hindered by spacing issues when constrained buildings are converted into mosques, and is largely ignored as an important issue because of a convenient belief that it is better for women to pray at home.

Despite the fact that Islam is a communal religion — a brother and sisterhood — making women feel unwelcome at the mosque is endemic in the Muslim world.

Back in the summer, I wrote a post on the exclusion of children in our mosques. Particularly, how many mosque prayer spaces are not child-friendly, and when they are, the onus is placed on mothers to take care of the children while the men are free to worship. Naturally, when children are excluded, it really means that women are excluded from religious, communal worship.

Some great dialogue was generated from that post, and one commenter asked for my take on this belief that the “best place for a woman to pray is in her home.”

Let me begin by saying categorically, that Islam does NOT forbid women from going to the mosque. In fact, it was encouraged by the Prophet when he said, “‘Do not prevent the female servants of Allah from going to the mosque…” (Muslim, Abu Dawud). The mosque is the center of the community, of access to Islamic education, and is key to fulfilling certain religious rites. So why then are some women barred outright by male family members? Why is there a global adherence to this belief that’s also being maintained by scholars, laypeople and by women themselves?

The Qur’an does not say where Muslims should pray. There are verses that say simply for worshipers to turn towards Mecca (2:149), and to not build a house of worship upon deceit, opposition or disbelief, but that it is better to build one’s faith on a foundation of love and piety (9:107-110). Unless referring to the mosque at Mecca, the Qur’an is silent on where Muslims need to congregate.

The traditions of the Prophet tell us that any place on Earth is suitable for prayer — any place except anything blatantly inappropriate. Like a bathroom, sewage drain, or bar serving baby back ribs wrapped in bacon and sauteed in a nice brandy sauce (well even so, I know a NYC Muslim liquor store owner who prays in the back).

It’s also in these traditions however, and particularly in the subsequent centuries of predominantly male interpretations of these traditions, that we find support for a whole slew of places for women to pray: behind men, above men in balconies, beneath men in mosque basements, or just not being allowed in the mosque.

Now, the most oft-quoted tradition supporting women praying at home states, “It is more excellent for a woman to pray in her house than in her courtyard, and more excellent for her to pray in her private chamber than in her house” (Abu Dawood, al-Tirmidhi). In context, this saying was related to the people after the Prophet had announced that men gain more reward when they pray in congregation at the mosque. Nonplussed by this announcement, a woman approached him and said, “but I’m at home with the kids and the housework. I can’t get to the mosque — that’s not very fair, is it?” The Prophet agreed, but explained it in terms of a woman’s responsibility in the private sphere: In context, the tradition is saying that while men get more reward by going to the mosque, women who have responsibilities at home get the same reward when they pray at home.

I’ve already discussed the issue of women maintaining the private sphere here. And for some mothers (myself included) this saying makes sense. Hubby and I both work to maintain the home — but let’s face it, it’s easier for him to get to the mosque. When I couldn’t attend evening prayers at the mosque because they were held during Eryn’s bedtime, I prayed at home. Apparently, I received more reward doing that, than if I had actually gone to the mosque.

But here’s the thing that bothers me: when this tradition is misused to discourage women from the mosque, people are told that it’s because women beautify themselves when going out, and cause fitna or religious strife in the community by “showing off their nakedness.” Because, you know, men are COMPLETELY INCAPABLE of ignoring their sexual urges. So ladies, put down that makeup and perfume and put on that burqa — the men are coming.

This interpretation sets women up for failure. When women are relegated to the back, on a balcony, in the basement, and are forbidden from attending, we are effectively removed from the community. When women are removed, we’re forgotten. When we’re forgotten, it’s normal to construct a small women’s prayer space as an afterthought. It’s not very welcoming to be an afterthought. It becomes disused. Women stop coming. People internalize. Children are brought up not attending mosque. Women believe they don’t have to attend mosque. Male interpretation reinforces this. More mosques are built without prayer space for women. And to top everything off, the justification for kicking women out is linked to her body and men’s inability to deal with their own two bits.

Really? Is that how low the scholars think of humanity?

I started this post painting a pretty bleak picture of our mosques. On one hand, I will go out of my way to avoid the mosques in which I don’t feel welcome. If Hubby, Eryn and I are out for the day and the closest mosque is “unfriendly,” I actually start feeling a little sick to my stomach thinking of praying there. I will actively refuse to pray and wait for Hubby to finish, convince him to just pray with me at home, or we’ll drive further until we come cross a “friendly” mosque.

On the other hand, there are beautiful, women friendly mosques that inspire me and expose me to leaders and scholars that help empower women and allow me to become acquainted with others (women AND men). Together we strive for the betterment of our community, which is what Islam is all about. I jump up excitedly when we go.

I wonder though if I should be attending the mosques that make me uncomfortable. A clean prayer place for women, or not having to use the back entrance shouldn’t be a surprise. It should be the norm. Women need to demand equal space and treatment in the mosque, and not pray in a “penalty box.” The more women become involved in the mosque culture and demand to be representatives on administration boards, the better the situation can become.

But that can never happen as long as women (and men) believe that it’s better for them not to attend the mosque.

Coffee With a Tea Partier – Conversations with Our Neighbors about Islam