Several weeks after Eid al Fitr and before Eid al Adha, it’s a good time to analyze the recent media embroglio about women and Eid prayers in South Africa. The ways in which South African Muslims interact with the media has changed drastically in the last few years with the rise of social media, and this has reflected itself especially in what has been called “the desktop gender jihad” (women using the internet to fight, lobby and advocate for their rights). 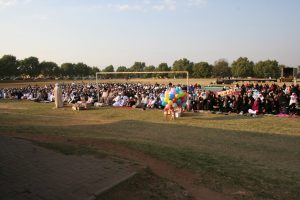 In the weeks following Eid al-Fitr, a group of South African women from different cities and affiliated with different groups put their heads together to make a statement: Women have the right to attend Eid prayers. Traditionally, South African Muslim women in the north have been barred from attending the prayers, as part of the dominant mindset of women as a source “temptation” and “distraction.” Muslims in the South, especially in the Cape, have always had women as part of their congregations. These differences are sometimes attributed to ethnicity and sometimes to madhab (school of law).The campaign to attend Eid prayer was carried out using various media channels, including radio and television interviews, newspaper articles, blog posts and social media updates.  I’d like to look at how Muslim women used the media to further their campaign, as well the counter-attacks launched by a number of Muslim media agencies.

South African Muslims love pamphleteering. The first pamphlet was undertaken by members of the Masjid-ul-Islam (a Johannesburg-based mosque that is inclusive to both men and women), entitled “Eid Bytes,” consisting of a number of prophetic traditions relating to women and the Eid prayer. Here it is interesting to note the way in which women use tradition to empower themselves. Then, numerous articles appeared in small but widely read community newspapers in Johannesburg, such as the Fordsburg Independent and The Rising Sun, putting out a message in the public space: Muslim women will not sit back and accept a status quo that usurps their right to participation in religious life.

Another significant highlight in the campaign is the contribution by journalist and Islamic scholar Quraysha Sooliman, who wrote extensively about the matter during Ramadan using both traditional knowledge and journalistic know-how to educate as many women as possible. She and Farhana Ismail, another community journalist, were catalysts in giving the campaign momentum through their community paper articles, radio and television interviews. For me, these are Muslim women with voices, loud voices, speaking for themselves.

Sooliman, who writes with power and confidence, routinely asks pressing questions in the media about the logic of some of the scholars.  In one article, she responds to a fatwa  by Mufti Abdul-Qadir Hussein on the Channel Islam International (CII) radio station:

We would like to ask the Mufti if all the scholars and muftis and Imams in all the other parts of the world are wrong in allowing women to attend the mosques and in demanding that they participate in the Eid salaah, and only Indian-Pakistani and a handful of South African scholars are right? And by the same token is the Mufti suggesting that all South African women have no morals and respect for the etiquette of the mosque? Is it correct to make such sweeping generalizations, or should the scholars rather focus on teaching the community the correct etiquette through encouraging them to attend?

Ismail was on the receiving end of the said mufti’s ire when she went live on CII after securing an interview to discuss the matter. Hussein was outraged that she had been allowed to air her views, and immediately went on a rampage, calling all women involved in the matter “the party of Satan.”

Another jarring example of public libel is the booklet making its rounds, entitled “A Dumb Woman’s View and its Refutation.” (pictured right) To make matters worse, the booklet is pink! It serves as an attack on Sooliman’s work, and repeatedly calls her “dumb,” “stupid,” “intellectually deficient,” “corrupt,” and a number of other expletives. The level of engagement is shocking, and speaks of frightened and injured male egos.

It has become common for men to target women who question, think independently and make informed decisions, and attack their personalities, their faith and their morality. This was quite apparent when the radio station allowed the mufti to slur women involved in the campaign. The station even went as far as to include the story in their news bulletin as a headline! To their credit, however, the station did open their lines the next morning for the listeners to voice their opinions, and the results were roughly equal in those for and against women’s inclusion.

The Voice of the Cape, a Cape Town-based radio station, a voice of sanity amidst the chaos, featured an article on their website delving into the issue. The article looks at the history of Northern Muslims and asserts that the dominant narrative has been one of women’s exclusion because of patriarchy and not religious tradition. The station is part of the Cape scene, where Muslim women are always accommodated in ritual life, and their support for Muslim women in the North has always been received graciously.

While Muslims consider Islam to be a religion that promotes the equal rights of both men and women, there remains a dominant patriarchal ideology among local ulema—one of the main stumbling blocks to elevating the status of women in society. This is the view of Professor Abdulkader Tayob from the Centre for Contemporary Islam at the University of Cape Town (UCT), in his analysis of an academic debate on the permissibility of women attending the Eid salaah:

The sensitive issue has ignited much discussion in Gauteng after a well-known mufti publicly condemned women for attending the Eidgah (Eid prayer, usually in an open field), sparking outrage from a network of progressive Muslim women who then issued a rebuttal to the scholar. The current debate not only centers around why women have been excluded from this sacred prayer, but also questions the prevailing sexist attitudes that exist amongst the ulema, which go against the teachings of the Prophet Muhammad (pbuh).

Na’eem Jeenah, columnist for al-Qalam, perhaps summed it all up best in his latest commentary, “Scared Men Try To Mess up Eid:”

What some of the foolish men in our community do not realise is that, as a whole, the community is neither ignorant nor stupid … Many of the women who attended had found out about the Eid salah after the negative propaganda campaign by the radio mufti and his ilk. All the negativity, it seems, convinced more women that they really should be listening to the advice of the Prophet Muhammad (s) rather than that of some scared man behind a mic. So, my advice to Mr mufti: polish up on your insults and bad logic; the women will expect you to advertise for them again before Eid al-Adha.

Another significant event in the story is of a wealthy Muslim community in the lush Johannesburg suburb of Houghton, who advertised that they would allow women to attend the Eid prayer for the first time, only to revoke the decision on Eid morning. The story was picked up by the mainstream Sunday Times, entitled “Women upset at being ‘barred’ from Eid prayer.”

The article appeared on the front page, as well the website, and reflected badly on the Houghton community who has prided themselves on their reputation. The piece included interviews with women who came to the venue only to find it deserted. It also included this powerful quote from Ismail,

“Muslim men are taught to see women as sexual beings before they are viewed as moral and spiritual beings, contrary to the teachings of the Koran. The Prophet commanded females to attend Eid namaz (prayer).”

Ismail also wrote a follow up article in the Fordburg Times, where she wrote poignantly about the Eid prayer she attended, and detailed the role of Masjid-ul-Islam in securing space for women worshippers.

So what does all of this mean? To me, it speaks to the shifting nature of religious authority, and the media’s role in shaping the Muslim tradition in South Africa, particularly with regards to gender norms. South African Muslim women have an increased visibility in the media, on the internet and in public. Community members were made aware of the campaign via media channels; the media also played the role of the battle ground, where the different sides went to war with each other with numerous rebuttals and counter-rebuttals. One message was clear: women are questioning the use and abuse of authority by the clergy, especially in the media.

Has all of this translated into concrete change? I would say yes. Not only was this the most talked about affair in the Muslim community, but the Eid prayer I attended saw a one-third increase in female attendants, as did the service attended by Sooliman. Women were also accommodated for the first time in various other smaller congregations, and a few women even attended an Eid prayer reserved solely for men in the Indian dominated community of Lenasia, a small town just outside Johannesburg. Their voices are being heard, loud and clear, and they resonate with many.

Coffee With a Tea Partier – Conversations with Our Neighbors about Islam