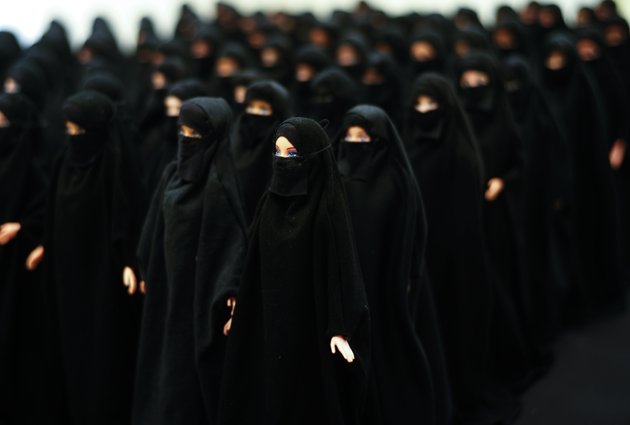 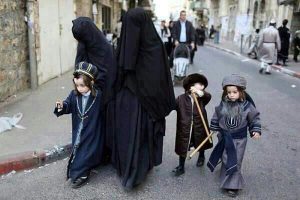 Just in case you thought the world was always picking on modest Muslim women, here’s news – they’re picking on modest Jewish women, too. A group of approximately 100 Jewish burka-wearing women in the Israeli city of Beit Shemesh will shortly be receiving news of a ban.  The Eda Charedit rabbinic organization will be issuing the equivalent of a fatwa against their modest fashion sense, likening the burka to, of all things – a sexual fetish.

Or, a sack of potatoes.

“We have got a Torah and we have got a tradition and these things were never allowed or demanded,” said Shlomo Pappenheim, a senior member of the management committees of the Eda Charedit. “Cover the body, fine, but you would think them a sack of potatoes.”

“The Eda Charedit is very against it [burka] and sees in it a real danger that by exaggerating you are doing the opposite of what is intended – severe transgressions in sexual matters.”

It is interesting to note that while France has just banned the niqab and burka for reasons related to “the dignity of the person and equality between sexes,” Israel is attacking the burqa for being too sexual.  The French senate passed the ban less than a week ago (Source: CNN) by a vote of 246 to 1, with about 100 abstentions, calling the burqa “a new form of enslavement that the republic cannot accept on its soil.”

So what is the real issuse?  Sexual fetish or slavery?  These two issues are closely intertwined when it comes to women, particularly because so much mistreatment and trafficking of women revolves around the sex trade.  Young women, and young girls, are stolen, sold, and used by the hundreds of thousands every year, but interestingly enough, I don’t think any of them are made to wear burkas.    So perhaps if France wants to put its foot down and take a stand, and issue a ban on an article of clothing that symbolizes the enslavement and sexual degradation of women in its republic, they might want to go after the miniskirt.

(Or maybe t-shirts that read ‘I’ve been forced into slavery and all I got was this lousy t-shirt,’ but I don’t think they make many of those.)

In the case of the Israeli ban,  I deeply sympathize with those women who are trying to protect their modesty.  As a Muslim and a woman who has been wearing an abaya (the burqa’s more stylish cousin) for over ten years, I have had many long conversations with other modest young woman – like the Jehovah’s witness who lamented how difficult it was to find a full-length skirt in the mall or a pair of jeans that didn’t have ‘Juicy’ printed across the backside.  Living in Northside Chicago, I traded shopping tips with ultra-orthodox Jewish friends and when the fashion industry failed to meet my requirements, my Mormon mother taught me how to sew.

While each of our religions are tremendously different in many respects, modesty is a common thread that runs throughout all three of them. Jewish, Muslim, and Christian women are all advised to cover their heads and be modest (1 Cor. 11:4-16), and yet, here we have an ultra-orthodox rabbinical council in Israel accusing the women of sexual fetishism.

Now, last I checked, sexual arousal in human beings was closely tied to a ‘less is more’ approach in clothing – fewer clothes equals more arousal. One could argue that a partially-dressed woman is more alluring than a nearly naked one, but most dirty magazines are not full of women in capris pants and t-shirts. And they’re certainly not full of women in burkas.

(On a side note, if the defining factor for the acceptability of clothing is how closely the wearer resembles a sack of potatoes, then we should expect a ban on judges’ robes, nuns’ habits, Hawaiian mu-mus, and those silly robes that we graduate in.)

If niqabis were to pull a fast one and start wearing Kabuki masks instead, would a French Kabuki-Ban follow?

Nuns cover, ultra-orthodox Jewish women cover, Amish and Mennonite women cover, but none of them use the burka. And, if French women were to pull a fast one and start wearing kabuki masks instead of niqabs, I doubt a ban on kabuki masks would follow. I believe that the real issue is not modesty, but identity. The burka – a symbol of Muslim modesty and identity –  is under fire the world over, and if Jews can wear it, and if Christians should decide to wear it, then what basis remains for saying that Muslims can’t wear it?

If the women of Beit Shemesh were to create their own modest garment – give the fabric a different cut, give the design a Hebrew name, and make its outward appearance unmistakably Jewish, then they would probably be lauded by the ultra-orthodox community instead of facing such insults as “smelly Arab.” They might even be seen as upholding or reviving important fundamentals of Jewish belief – adherence to scripture and pride in their identity as modest Jewish women. The mistake they’ve made is not one of fashion sense, but political sense. They’re blurring the line between us and them and that makes it harder for us to persecute them.

In order to maintain conflict, it is crucial that your opponent be seen as having differences irreconcilable through any other means. This is why, on a smaller scale, when one village is mortal enemies with another, “they” do things this way, and “we” do things this way, and these differences are made prominent even to the extent that the men from this village will only part their hair this way and the women will never cook fish on Thursdays, because only they cook fish on Thursdays. Both villages part hair and eat fish, but not like they do. If you want people to fight, tell them how different they are, because if they realize they’re both the same, then you’re in danger of losing support for your war.

Fighting to reinforce the differences between Muslims, Christians, and Jews is the strongest way to maintain animosity, and by saying that the women of Beit Shemesh can dress modestly and cover their heads in anything but a burka is perfectly in keeping with this strategy.  In a kinder world, a Jewish woman and a Muslim woman could find a talking point in something as simple as ‘Hey, nice burka!’ but in this world, a Jewish woman in a burka is stopped at checkpoints, insulted by her neighbors, and harassed by Israeli security to prove she is Jewish. Perhaps, Jewish women in burkas present a difficult question – if you all look alike, how do we know who to persecute?

Say: “O People of the Book! come to common terms as between us and you: that we worship none but Allah; that we associate no partners with Him; that we erect not, from among ourselves, Lords and patrons other than Allah.” If then they turn back, say you: “Bear witness that we (at least) are Muslims (bowing to Allah’s Will).”  Quran 3.64

I salute the women of Beit Shemesh for their courage and their determination to fulfill what they believe are their religious duties as women, and for my French sisters, I ask that Allah make righteousness easy for them.  It’s hard to fight for your modesty in a world that insists you give everything away, may Allah increase us all in courage and faith, and guide all of us to truth, and eventually, peace.

Shabina Khatri: Do You Need a Muslim Friend?

Muslims and Islam Were Part of Twin Towers’ Life