In the photo, Heba Abbasi has just emerged from the water after one leg of the Chicago Triathlon. Wearing a long-sleeved shirt and pants, she contrasts with the athlete in spandex shorts and a form-fitting tank top ahead of her.

Both women cover their hair. Abbasi, though, isn’t wearing a swim cap but the hijab, the traditional headscarf worn by Muslim women.

“Hijab is not meant to limit me and stop me from doing things,” said the 34-year-old Chicago woman, who lives on the city’s West Side. “I do like challenging the stereotype and letting people see me in a way they don’t think of Muslim women.”

Abbasi is one of about 70 Muslims featured in a photo book called “iCover: A Day in the Life of a Muslim-American COVERed Girl,” by photographer Sadaf Syed. The women profiled include a dentist, public school teacher, boxer, actress, homecoming queen, mothers and more. The aim of the book, released in July and now in its second printing, is to change people’s perceptions about women who wear headscarves.

There are about a half-million Muslims in the Chicago area, according to the Council on American-Islamic Relations, most residing in the city and southern region. Heavy concentrations are found in south suburban Bridgeview, Villa Park in the western suburbs and Rogers Park on the city’s North Side.

Syed, who lives in west suburban Willowbrook, said inspiration for the book built gradually. A freelance photojournalist and wedding photographer, she wanted to use her craft to “touch people’s hearts, educate them and inspire them.” 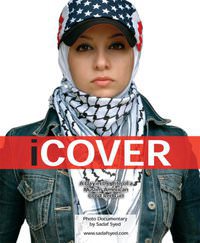 As a Muslim woman who wears a headscarf herself, Syed is particularly concerned with the misconceptions of Muslim women who choose to cover their hair and dress modestly. Typically, girls start wearing the hijab when their bodies start maturing, Syed said, but added that some women choose to start later in life.

“After 9/11, I noticed people were confused, not wanting to learn but just going on what they see in the media,” said Syed, 36. “The impression it leaves is … that Muslim women are being oppressed, suppressed, abused and forced on — everything that Islam does not stand for. Islam respects women. We are a love-thy-neighbor people just like the other Abrahamic religions.”

The Muslim holy book, the Quran, instructs both men and women to dress modestly. The headscarf for women is a reflection of that requirement, which Syed described as a way for women to “honor and respect God and themselves.”

But anti-Muslim sentiment has fueled harassment, especially of women who are more obvious practitioners of the faith, said Syed, and confusion about something as innocuous as a headscarf can lead to hatred.

Amina Sharif, spokeswoman for the Council on American-Islamic Relations in Chicago, said It is common for Muslim women to have their headscarves yanked off. But they don’t usually report it, said Sharif, whose organization advocated for a 28-year-old woman whose scarf was pulled off in a Tinley Park grocery store days after the Fort Hood, Texas, shootings in November. The 54-year-old woman who pleaded guilty to pulling off the headscarf was fined $2,500, put on probation and ordered to attend an anger management course focusing on diversity.

“Those who have negative opinions of Muslims generally haven’t met one,” said Sharif, who called “iCover” a groundbreaking book that should be in every public school and community library. “I felt very empowered when I was flipping through the book. I felt very proud to be a Muslim woman.”

For Sarah Bakhsh, 29, of Naperville, her government job as a nuclear reactor engineer took her to power plants and industrial sites where she became the target of suspicion. When she goes on inspections for the U.S. Nuclear Regulatory Commission, she said she’s met with a look that says, “These are the type of people we’re supposed to protect this country from.”

Related Topics:hijabicoverMuslimphotographerssadaf syed
Up Next

MTV: Islam Is Not The Enemy