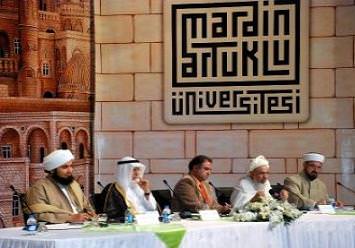 I wish to speak about the Mardin Conference as someone who was closely involved with it from the conceptualization phase all the way up to its concluding session when the “New Mardin Declaration” was issued.

To achieve this goal, the conference needed to investigate a number of topics:

(1) A full conceptual understanding of the fatwa was needed.

(2) The correct text of the fatwa had to be determined and errors in transmission identified.

(3) A correct understanding of the Mardin fatwa must be determined on the basis of the above.

(4) The fatwa’s benefits for the present day must be investigated.

The First Investigation: Conceptualizing the Fatwa

Mardin is the region of Turkey where Ibn Taymiyah was born. His home city, Harran, is located within Mardin. The Mongols conquered and occupied Mardin when Ibn Taymiyah was seven years old, forcing him and his family to flee.

The people of Mardin were Muslims. Ibn Taymiyah regarded the Mongol occupiers who ruled them as people who were unbelievers in Islam as well as spoilers and murderers, since the Mongols carried out numerous atrocities against the inhabitants of the region. The situation in the region was one where the general populace was Muslim but living under the dominion of non-Muslim rulers.

His answer – known as the Mardin fatwa – addressed these points clearly:

1. The lives and property of the people of Mardin are inviolable. Their living under the subjugation of the Mongols does not compromise any of their rights, nor can they be maligned verbally or accused of hypocrisy.

2. As long as the inhabitants of Mardin are able to practice their religion, they are not obliged to emigrate.

3. They should not give assistance to those who are fighting against the Muslims, even if they are forced to flatter them, be evasive, or absent themselves.

4. The territory is neither wholly a part of the Muslim world, since it is under the domination of the Mongols, nor is it part of the non-Muslim world since its populace is Muslim. It is in fact a composite of the two. The Muslims living therein should be treated according to their rights as Muslims, while the non-Muslims living there outside of the authority of Islamic Law should be treated according to their rights.

Ibn Taymiyah’s nuanced description of the region demonstrates something of his ingenuity in dealing with complex questions and situations.

The Second Investigation: Determining the Correct Wording of the Fatwa

The text of the fatwa is as follows:

Ibn Taymiyah was asked about the land of Mardin. Is it a land of war or peace? Are the Muslims who live there obligated to emigrate to other Muslim countries? If they are obliged to emigrate and they fail to do so, and if they assist the enemies of Islam with their lives and property, are they sinful for doing so? Are those who accuse them of hypocrisy and malign them sinful for doing so?

Praise be to Allah. The lives and property of the Muslims are inviolable, whether they are living in Mardin or elsewhere. Assisting those who are acting in opposition to Islam is unlawful, whether those who give the assistance are the people of Mardin or others. The people living there, if they are unable to practice their religion, then they are obliged to emigrate. Otherwise, it is preferable but not an obligation that they do so. It is unlawful for them to aid the enemies of the Muslims with their lives and property. They must refuse to do so by whatever means they can, like absenting themselves, being evasive, or showing flattery. If the only way open to them is to emigrate, then that is what they must do. It is not lawful to malign them categorically or to accuse them of hypocrisy. Disparaging and accusations of hypocrisy must be according to the designations set forth in the Qur’an and Sunnah and are equally applicable to some of the people of Mardin as they are applicable to some people elsewhere.

As for whether it is a land of war or peace, it is a composite situation. It is not an abode of peace where the legal rulings of Islam are applied and its armed forces are Muslim. Neither is it the same as an abode of war whose inhabitants are unbelievers. It is a third category. The Muslims living therein should be treated according to their rights as Muslims, while the non-Muslims living there outside of the authority of Islamic Law should be treated according to their rights.

In some printed editions, the text is corrupted to read: “…while the non-Muslims living there outside of the authority of Islamic Law should be fought as is their due.”

This change in meaning is the consequence of the substitution of two letters in a single word. Instead of the correct word yu`āmal (should be treated), the word is rendered yuqātal (should be fought). This typographic error changes the meaning of the phrase drastically.

The correct wording of the fatwa appears in the following sources:

1. The only known manuscript copy of the fatwa which is the Zahiriyyah Library manuscript (2757) archived at the Asad Library in Damascus.

2. The fatwa is quoted by Ibn Taymiyah’s student and contemporary Ibn Muflih in his work Adāb al-Sharī`ah (1/212), with its correct wording: “…while the non-Muslims living there outside of the authority of Islamic Law should be treated according to their rights.”

4. Sheikh Rashid Rida quotes it correctly in the journal al-Manār.

Due to the wide availability of this edition of the Fatawa, the inaccurate wording became the one that was well known to the public and to students of religious knowledge. Likewise, when the fatwa was translated into English, French, and other languages, the printed edition containing the error was relied upon. As a result, the reputation of Islam was compromised, and also a few young people in the West who converted to Islam got a false impression of Islam’s teachings.

If the Mardin Conference achieved nothing other than to bring this error to light and correct it, then this would have been accomplishment enough.

The Third Investigation: Determining the Correct Meaning of the Fatwa

The corrupted text of the Mardin fatwa has become the basis for the legitimization of many violent and militant groups within Muslim society. Among those who used the fatwa in this manner was Abdussalam Faraj in his book al-Farīdah ahl-Ghā’ibah (p. 6), which has become a manifesto for militant groups.

Many scholars have subsequently refuted his conclusions, including the former rector of al-Azhar Sheikh Jad al-Haqq, as well as the Chairman of al-Azhar’s Fatwa Board Sheikh `Atiyyah Saqar. They successfully discussed the implications of the Mardin fatwa according to its context, even though they accepted the text as it reached them in its corrupted state. Had they known the authentic wording of the text, it would have saved them a lot of trouble.

The reason why militant groups rely upon the Mardin fatwa to legitimize their behavior is because of the corrupted phrase “…while the non-Muslims living there outside of the authority of Islamic Law should be fought.” This phrase can be seen to imply two things:

1. The directive to fight is given in the passive voice, without stating who is to carry out the fighting. Militant groups have used this as license for them to assume for themselves the role of taking up arms against people from within Muslim countries and communities.

2. The phrase “outside of the authority of Islamic Law” becomes ambiguous in the context of the corrupted rendering of the text. It could be interpreted to mean almost anyone, starting from those who commit minor sins to those who commit major violations. This has given militant groups a wide scope of interpretation for acting against others.

Once the authentic wording of the text is known, however, what the militant groups rely upon disappears entirely. The understanding of the fatwa is completely different. The correct wording of the fatwa emphasizes the inviolability of Muslim life and rules out any possibility of placing their lives or property in jeopardy. The fatwa clearly states: “The lives and property of the Muslims are inviolable, whether they are living in Mardin or elsewhere… It is not lawful to malign them categorically or to accuse them of hypocrisy.”

Also, it makes it clear that places like Mardin are neither places where Islamic Law is implemented nor places of conflict. Ibn Taymiyah in his fatwa declares that Muslims can live there as long as they are free to practice their religion and that the Muslims are entitled to be treated by other Muslims according to the rights that they have as Muslims, and the non-Muslims who live there and who are not subject to Islamic rulings should be afforded their rights as well.

This is what the Mardin fatwa really says, when its authentic text is relied upon.

The Fourth Investigation: Relevance for Our Times

Ibn Taymiyah, in his fatwa, recognizes that the world is not to be divided simplistically into Islamic lands and non-Islamic lands, unlike many before him who held to that dualistic view.

He recognized that there is a third type of society which has aspects of both. Furthermore, he stated that Muslims can live in such societies as long as they are free to practice their religion and that everyone should be afforded their rights. Muslims should recognize the religious rights of their fellow Muslims living in those lands, as well as the rights of the non-Muslims there who are not subject to Islamic Law.

This fatwa has relevance for today’s pluralistic world, where there is scarcely a country where Muslims do not live. The conditions the Muslims live under vary from country to country. In many countries of the world, Muslim minorities fully enjoy the right to practice their faith. They are allowed to worship according to Islamic teachings and they are not coerced into suppressing or abandoning their faith. Those countries may not be part of the Muslim world, but they are certainly lands of peace and security.

We can see that Prophet Muhammad (peace be upon him) sent the first party of emigrants from Mecca to Abyssinia, a non-Muslim country, and he did so because it was a land of security where the Muslims were safe in their religion. This was because the king of Abyssinia was a just king who never wronged the people under his authority.

This is the gist of what the New Mardin Declaration stated, which was ratified by the delegates at the end of the Mardin Conference.

Path of Allah or Paths of Allah? Survey of Classical and Medieval Interpretations of Salvific Exclusivity | Yasir Qadhi Vid