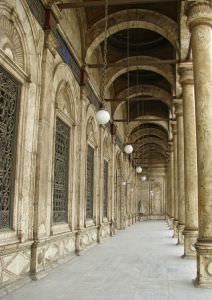 Is it confirmed that Imam al-Shafi’i used to issue certain juridical responses (fatawa, sing. fatwa) in Iraq then after he moved to Egypt, he issued differing fatawa due to the change in culture between Egypt and Iraq. As a result, he had fatawa that suited the people of Iraq and fatawa that suited the people of Egypt? This is what a sheikh mentioned on a satellite channel and he used this act of al-Shafi’i to justify changing the fatwa following the change in locality!

No, it is not confirmed that Imam al-Shafi’i used to have one set of fatawa that suited the people of Iraq and another set of fatawa that suited the people of Egypt. Rather, what’s established in the books of the al-Shafi’i juridical school is that al-Shafi’i used to have two juridical schools. One school was established in Iraq and is referred to as the “old school;” which his students there learnt from him and about which he wrote several books. Then, when he moved to Egypt stopping by Mecca, he met a number of scholars and narrators and he retracted many of his earlier opinions which he held in Iraq. This is what became known as the “new school.” At that time, those two schools were not known as the Iraqi school and the Egyptian school. It is said that this new school was formed shortly before his leaving Iraq for Mecca or at least before his leaving Mecca. However, what’s settled is that he wrote it and firmly established it in Egypt. Therefore, the new school was not dependent upon whether it was in Egypt or Iraq.

In order to further prove this point, consider the following:

1. If the matter was simply providing fatawa suiting each locality, then he would not have ordered his students to stop writing from the books he composed in Iraq, nor would he have forbidden the people to narrate from those books. He used to say, “He is not forgiven who narrates from me the old [school]” (Cf. al-Bahr al-Muhit by az-Zarkashi, 4/584). Instead, he would have made for each locality the fatawa that suit it.

2. If the matter was like what those claimed then his students in Iraq would have used his old opinions. The reality though is contrary to that.

3. None of the leading scholars of the al-Shafi’i school, who are the most acquainted with his method, ever mentioned this reason [the change in juridical opinion was due to change in locality]. In fact, when some of them chose some of his old opinions, they didn’t attribute them to al-Shafi’i. Rather, they chose those opinions because of the strength of their proofs, at least from their point of view.

4. The leading scholars of the al-Shafi’i school clearly stated that it’s not permissible to follow the old school of al-Shafi’i, even if the follower is from Iraq. So, how can one claim that the reason for the change was the change of locality and the change of milieu?

5. If it’s true that Imam al-Shafi’i changed his school in Egypt because of the change in locality then his followers outside of Egypt would not have followed him. What’s well known however, among students of knowledge, is that the leading Shafi’i scholars, wherever they are, even the people of Iraq, follow his new school which he founded in Egypt. Imam an-Nawawi said, “Any religious question that has two juridical answers by al-Shafi’i, one old and one new, then the new is the valid answer and should be acted upon.” (al-Majmoo’, 1/66) He also said, “It is not to the mufti (one authorized to issue a juridical ruling) nor to the common man, who follow the school of al-Shafi’i, if there is a religious question that has two answers, to act upon the answer of his liking. Rather, in a situation where there are two answers, he should use the latter of the two.” (al-Majmoo’, 1/68) It’s worthy to note that he [an-Nawawi] did not make a distinction between the mufti in Iraq, the mufti in Egypt, and any other mufti anywhere else. What is so strange about this whole matter is that those who claim that al-Shafi’i changed his juridical opinions due to the change of people’s customs and habits want, through this claim, to issue lenient fatawa even if it contradicts the evidence [found in the main sources]. Their claim in this is that al-Shafi’i issued more tolerant juridical opinions that suited the people of Egypt in order to make it easy on them. What these people do not realize is that his juridical opinions in Egypt are stricter than his juridical opinions in Iraq. In fact, his opinions in Iraq are closer to leniency and tolerance. On the other hand, he formulated his opinions in Egypt based on reservation. In addition, he abandoned the principle of masalih mursala [maximizing the interest of people when they’re faced with a new situation over which the sources are silent]. No consideration is given to customs. All consideration is given to the text along with a complete allegiance to the literal meaning of the texts, as will become clear through some of the examples that I will cite shortly. In fact, there is not a single juridical issue which he [al-Shafi’i] changed his opinion about due to the change of circumstances between Iraq and Egypt. The burden of proof is upon the one who initiates the claim, and that’s nearly impossible in this case.

1. Using gold and silver vessels is makruh (discouraged) in the old school and haram (forbidden) in the new school.

4. Washing a vessel that has been licked by a dog. In the old school, it’s not obligatory to wash it. In the new school, it has to be washed six times.

7. The wife of the missing. In the old school, she waits four years from the time she stopped hearing from him. Then, she waits the idda [waiting period] of death which is four months and ten days. In the new school, she does not go through any idda nor does she get married again till she ascertains his death. So he adopted the easy opinion of Ibn Abbas in the old school while he adopted the strict opinion of Ali in the new school.

The examples are many and one can refer to them in the sources where they are likely to be found. What one will observe is that there is no effect of locality and culture on the difference between the two opinions of al-Shafi’i, the old and the new. Rather, the reason of the difference goes back to adding precision to his juridical school and fine-tuning it with legal evidence. His student, Imam Ahmad bin Hanbal, was asked, “What’s your opinion about the books of al-Shafi’i, are the books with the Iraqis more beloved to you or the books with the Egyptians?” He replied, “Read the books that he composed in Egypt, for he composed his books in Iraq without precision then he went to Egypt and wrote his books with precision” (al-Bayhaqi, Manaqib al-Imam al-Shafi’i, 1/263). So, his students and those most acquainted with him attributed the reason for changing his juridical school to precision and accuracy. If culture or customs had any role, it would have been mentioned. So to claim that this is the reason is a statement devoid of truth and does not accord well with logical analysis. It can only be stated by one who is ignorant of these facts or by a person of desires. This does not mean that the faqih [scholar of Islamic law] cannot change his fatwa following a change of time or place. In fact, that is possible in the issues that are based on customs, benefits, and removing hardships. As to the issues that are based on authentic legal proofs, then its rulings are sound for all places and times. Allah knows best.

Friday Khutbah in Arabic: To be or not to be?