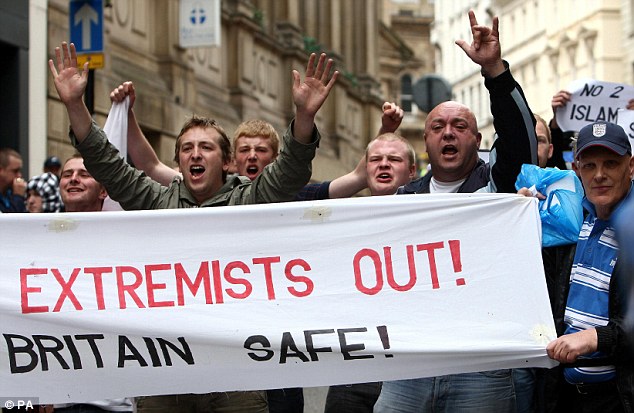 The English Defence League is an organisation that has existed for about a year, whose creation was prompted by a demonstration by al-Muhajiroun at a soldiers’ parade in Luton in March 2009. To recount, the Royal Anglian Regiment, recently back from Iraq, marched through the town and besides the crowds of (mostly white) locals were a tiny group of al-Muhajiroun who held placards reading “Illegal war in Iraq”, “Anglian soldiers, go to hell” and other slogans that were understandably found offensive. In reaction, a group was formed with the name “United Peoples of Luton” but changed its name to the English Defence League after they received support from other parts of the country.

The thuggish element in the EDL has been notable from the start, with stories in both left- and right-wing British newspapers exposing the fact that several of those who organise EDL events are known football hooligans with criminal records. Many football (soccer) teams in the UK have gangs of hooligans (thugs) who seek out fights with other teams’ hooligans, and not all are racist or support the far right. As Nick Lowles of Searchlight notes, during the early 1990s when the British National Party won a seat on an east London council, Combat 18 (a far-right thug/wannabe terrorist outfit) attempted to win the support of Millwall’s hooligans, but were rejected: although Millwall itself is on the Isle of Dogs in east London, the club’s ground is south of the river in Bermondsey, where there is a substantial black population. They associated C18 with the Chelsea club and “were also willing to accept anyone within their ranks as long as their loyalty was to southeast London and the club”.

However, in the EDL, at least some of the rivalries have been put aside in pursuit of vicious racism and Islamophobia. There is plenty of video footage of them around, particularly privately-filmed footage on YouTube, some of it shot by supporters and some by opponents, and much of it shows the shouting of racist slogans, casual violence, attacks on police officers and vehicles. They have made some attempt to demonstrate that they are “not racist”; they prominently show off their black members and one of their leaders is a Sikh, Guramit Singh. In a recent BBC documentary, one of the main EDL organisers in Luton showed off a young black woman he claimed was his daughter when trying to explain away the claim that he was a racist, on the basis of his having provided a signature to allow a local BNP candidate to stand. In the same documentary featuring an EDL demo outside Parliament in support of Geert Wilders, an Asian guy called Abdul from Glasgow was shown, who boasted that he was a non-practising Muslim and supported the EDL. However, Singh showed what he thought of the likes of “Abdul” by including in his speech the words, “God bless the Muslims because they’ll need it when they’re burning in ****ing Hell”, and this got much applause from the mostly white, male crowd.

Regardless of whether they have black members or not, they certainly have plain racists in their ranks — a Guardian investigator spoke to a woman at an EDL demo in Stoke on Trent in January who said, “They [British soldiers] go over there and fight for this country and then come back to be faced with these Pakis everywhere. But to be honest it is the niggers I can’t stand”. However, Islamophobia is their main driving force and despite occasional talk of “extremism” and “Muslim militants”, the fact is that they do not make any distinction between ordinary Muslims and “militants”, which is why they are best known for demonstrating against the construction of new mosques, supporting Geert Wilders who condemns Islam in general rather than al-Qa’ida or terrorism, and why slogans too obscene to repeat here, insulting to Allah subhanahu wa ta’ala or the Prophet, sall’ Allahu ‘alaihi wa sallam, are featured in much of the footage which is available.

The same investigation also found someone making an attempt to “intellectualise” the EDL: Alan Lake, an IT consultant based in London, claims that the UK will have Shari’ah law within 40 years “unless something is done”. He favours an alliance with the UK Independence Party, which has existed since the 1990s and whose main policy is withdrawal from the European Union, but which has diversified into Islamophobia since 2005 and particularly since “Lord” Pearson took over as leader. However, Lake stresses the importance of the ability of the EDL to “put bodies on the streets” and tells the Guardian, rather threateningly, that “these people are not middle-class female teachers … if they continue to be suppressed it will turn nasty in one way or another … if we are going to have a mess that is so much grist to the mill”. This is all rather reminiscent of Nick Griffin’s famous comment after the BNP’s council by-election victory in 1993: “the electors of Millwall did not back a post-modernist rightist party but what they perceived to be a strong, disciplined organisation with the ability to back up its slogan ‘Defend Rights for Whites’ with well-directed boots and fists”. Of course, the criminal records of a number of the BNP’s senior members is no secret either.

The article also quotes a Manchester-based academic, Matthew Goodwin, as saying that the EDL has resonance because its anti-Muslim sentiments are echoed in the popular media, which is not true of the anti-semitic and anti-black bigotries of past generations of the far right. The front-page rants against the “burka” and the brazen untruth that the UK is headed for Shari’ah law, something Muslims simply have not demanded (other than the extremist fringe group al-Muhajiroun), are well- known to most Muslims that live in the UK were staples of some of the right-wing press (the Mail, Express and Star) for some time and although the stories have peaked, they clearly made a huge impression on many of their readers, and anti-Shari’ah slogans can be found on banners in some of the YouTube footage (such as this video).

How much of a threat do the EDL pose? In terms of potential to become a mass movement, in my opinion: not much.

They are well-known to be a poorly disciplined rabble of hooligans, and every second of video footage about them shows that this is the case. They should not be compared with Hitler’s Storm Troopers which, although they were thugs, were a disciplined private army; the EDL simply have no Hitler figure and many of them do not respect or answer to Nick Griffin or anyone else in the BNP. They are known to be divided against each other, some of them supporting and some apparently rejecting the BNP, besides the football club rivalries. They cannot persuade the middle-class mainstream of British society that they are defending the British way of life, because forming mobs, shouting obscene slogans and attacking the police are not part of their idea of any British way of life. In any case, the female half of the white middle class could not be expected to identify with the EDL’s crowds of young male hoodlums. The normal way of protesting in Britain is marches and rallies and letters to MPs and newspapers, not drunken rampages.

This issue makes it much easier to use the law to stop the EDL from holding their “demonstrations” and to prevent attendance. Their events do not even bear much resemblance to the National Front marches of the past, and it can be predicted for certain that criminal acts will take place; it is highly likely that the police will be attacked, that the “demonstrators” will try to break through police lines, and that if they succeed, criminal damage and violence are likely to be the result. This is the whole point of their demos – to intimidate and threaten. As the Guardian investigation referenced earlier makes clear, when they are present, individual Muslims, male and female, stand to be threatened and even physically attacked (along with anyone who “looks like a Muslim”). If they manage to get to a mosque, they will ransack it and beat up anyone they find inside.

So what are Muslims to do about this? Sister Mehzabeen (iMuslim) posted some very valuable advice right here on MM last September that brothers should avoid acting on anger and rising to the bait and getting into fights, and sisters should stay away altogether in case brothers be provoked by EDL thugs into fighting for them. On the other hand, more Muslims should be present at UAF (Unite Against Fascism) counter-demonstrations, as right now it may look as if we are relying on non-Muslim well-wishers to fight our battles for us, and it may only take one serious incident to diminish their numbers. Mosques should both strengthen their general security to prevent doors and windows being forced and implement emergency measures in case the building should come under attack during salaah.

We should also attempt to use the law to stop the EDL’s “demonstrations” entering areas where we have homes, businesses and places of worship because of the destruction and violence that would happen if they did (and because there is no reason why Muslims – or anyone else, for that matter – should have to lose a day’s business so that a bunch of thugs can go on the rampage). It is also important that we counter the lies being published by the tabloid media in particular, but much effort is already being put into this. Most of all, it is a great opportunity to show that the Muslims are civilised and law-abiding people and that we have more in common with other such people than with those who purport to “defend” them.

The mysterious case of the grey lady of Bagram