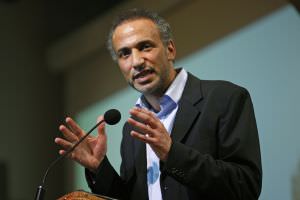 Tariq Ramadan is a big draw wherever he speaks, whatever the topic. It’s not surprising, then, that his first ever speaking engagement on U.S. soil drew wide media attention and packed the Great Hall at The Cooper Union. In hindsight, too, it’s no surprise that the event simply didn’t live up to its billing.

The program felt disjointed from the outset. First, the impossibly broad topic of “Secularism, Islam, & Democracy: Muslims in Europe and the West” all but assured an evening’s worth of simplistic generalizations and platitudes. Second, Dr. Ramadan’s own opening remarks foreshadowed how his legal battles and polarizing persona would later color, dilute and, at times, derail the subsequent panel discussion. Last, and fatally, instead of letting Dr. Ramadan lecture from the podium (which would have been the best option given the hall’s layout), or engage in a one-on-one interview (which could have worked with a proper interlocutor), the program organizers inexplicably decided to stick Dr. Ramadan in the middle of a multi-speaker setup that was bound to stifle any meaningful dialogue.

What are we talking about again?

Simply put, the way this event unfolded was a case study in the failure of panel discussions. The format really didn’t allow for a cohesive exchange of ideas – a feature that a program of this intellectual magnitude truly deserved. Dalia Mogahed and Joan Wallach Scott, for example, both offered relevant academic insights during their allotted time, yet their remarks felt blunted due to time constraints and, to be honest, poor moderating.

The latter circumstance was most evident when Jacob Weisberg, the evening’s host, passed the baton to Dr. Scott, who wrote The Politics of the Veil, with this gem of an intro: “Orthodox Islam has to be one of the most powerful forces for the oppression of women in the world today…” While Mr. Weisberg has every right to ask about the role of women in Islam, it seems a bit counterproductive to frame a question in the rhetorical mold of “When did you stop beating your wife?”

Any hope that the discussion would somehow coalesce around the stated objective went out the window once George Packer, a staff writer at the New Yorker, took the microphone. Acting more like an instigator than inquisitor, Mr. Packer accused Dr. Ramadan of whitewashing his grandfather’s supposed ties to Nazi sympathizers. The subsequent back and forth hijacked much of the evening, to the audience’s great frustration. Whatever the merits of this debate, it was simply out of place and highlighted the event’s overall lack of focus.

When fair becomes the enemy of meaningful

In reasoning why the organizers decided on such an obviously flawed format, I can only assume they did so out of a misguided sense of fairness. By letting Dr. Ramadan speak in such a public forum, perhaps they felt that they needed others to challenge his views or, seemingly in the case of Sr. Mogahed and Dr. Scott, to corroborate them from a different perspective. As a result, none of the speakers had a chance to gain any intellectual traction, to the detriment of those in attendance.

Perhaps my expectations were too high. Perhaps my recent positive experiences at lectures with similar topics (one of which I document here) colored my perception of “what works.” More likely, the organizers at Cooper Union simply missed a golden opportunity to showcase a historic speech from a world renowned speaker. Not like they have any experience doing JUST THAT, or anything.