Going back to the Open Thread’s roots this week with a healthy sampling of interesting stuff. 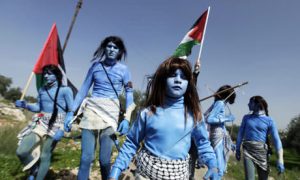 First, an article that lit up the Egyptian twittersphere: Why do Egyptians love Avatar? Joseph Mayton, editor and founder of Bikya Masr, argues that the region’s enthusiasm for the film relies on flawed parallels to Arab struggles against oppression. Specifically, he contends that the film’s logic would imply that the Palestinian people are in need of a foreign savior who will free them of Israeli occupation. Along these lines, Mayton asserts, quite controversially, that “Egyptians want something to believe in and Avatar offers a vague picture that is being co-opted into something it isn’t.”