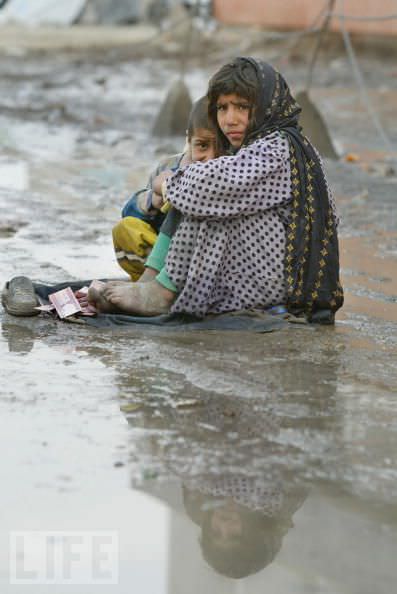 “O, Prophet of Allah! The rich among us have taken away all the rewards,” complained the poor Companions. “They pray as we pray, they fast as we fast, but they also give wealth in charity (while we have no wealth to spend).” (Refer Imam Nawawi’s 40 Hadith for the full narration.)

THE poor among the Ummah deserve a special mention because they are more often than not overlooked, their interests disregarded and their voices ignored. Throughout human history, they have always been the first to believe in the Messengers of Allah, and they will enter Jannah 500 years before everyone else.

During Ramadan last year, at the initiative of a friend, we stood at a traffic signal giving away dates, water and laban just before Iftar time for commuting people who may not have a chance otherwise to break their fast with food. We distributed all the food packs without realizing we had kept none for ourselves, which left us with no other option than breaking our fast at a masjid nearby. The adhan was called while we were heading to the masjid.

We joined the “banquet” of a people who would seldom – if ever – join ours. They were those whose names would never find place in the sprawling invitations we give out for our lavish feasts. Yes, they were all there – the African children and the Asian laborers.

Yet they welcomed us with a smile and made space for us. They shared their Iftar, which was no more than some dates, a piece of bread that they broke into half for us, and some drinks. Being used to excess, we couldn’t imagine how the already small meal would be sufficient for them if they divided between us.
The African children, stereotyped for crimes and what not, were wonderful. A boy turned to me and passed on his can of soft drink. What should I do? I refused. “Children they are after all, who not just love, but crave for sweet drinks,” I thought. He pushed the can towards me and gestured he would share his friend’s.

These are people who we don’t even say our salaams to. The Black women scavengers are seen all around the country. They stop with their trolleys and children at the time of Salah and pray on pavements. Nevertheless, we pass them by as if they don’t exist, as if they are excluded from the obligation of saying salaams to our fellow Muslims.

How much did I learn from that incident? I don’t know. Which lesson was the most important – being content with little; giving preference to others over ourselves; or genuine hospitality? I don’t know. I was reminded of a narration in Al–Bukhari: A man came to the Prophet

and said, “Poverty has struck me.”

The Prophet asked his wives if they had anything to feed the man. They had none. So an Ansari man came forward to host the man. He took him home and told his wife, “Entertain the guest of Allah’s Messenger generously.” She said, “By Allah! We have nothing except the meal for my children.” He replied, “Put your children to sleep if they ask for supper. Turn off the lamps. We go to bed hungry tonight.” The lights were put off so the guest wouldn’t know the hosts had nothing to eat, but were merely pretending to eat in their empty plates. The Prophet (peace be upon him) said the next morning that Allah “laughed at the action of so-and-so and his wife” and then revealed the verse, “and they give them preference over themselves even though they were in need of that.” (Qur’an, 59:9)

Life carried on and the incident was soon buried in the sands of time till something similar took place this Ramadan. This time we were in the Prophet’s Mosque, waiting for the time of Iftar. As is the usual practice, locals of Madina compete with each other to serve the fasting people. The sufra was spread early, and the people were taking their spots – the places from where they would serve.

The hosts of the sufra where I was seated were a father and four sons, the eldest of whom looked no more than twelve. As yoghurt, bread, dates and water were being dished out, one of the boys would stand by the passageway inviting the influx of worshipers to break the fast at his sufra. He had many competitors to worry about. When people walked past him without paying any attention, he started to cling on to their arms with his tiny hands, pleading them to be his guests.

What desire to serve! How could any number of words describe that sight, or describe the emotions that would erupt from such a sight?
My hosts did not appear rich. Their clothes were simple. The father’s thobe was, according to the standards of elite, dirty. The family appeared to be even larger, and their income modest. Yet they were here spending their valuable money to feed others, so they could please their Lord and earn some reward.
There we were, sitting with fine, pressed clothes, eating shamelessly, and being pleased with the “how–good–we–are” thought. Such incidents really show who the real miskeen are. We have built up fortunes of kings, but give charity less than a pauper would. The truly rich are not those who have more cash, they are those who have big hearts filled with lots of generosity.

With all the education, culture and enlightenment, if we have not come up to the level of underprivileged Muslims in character then there’s some fundamental flaw in the methodology of our learning.

were alive today, the rich would really be complaining, “O, Prophet of Allah! The poor among us have taken away all the rewards!”

As published in the Saudi Gazette.