The following is a guest article submitted by sister Fatima Barkatulla: London-based blogger, and regular columnist for SISTERS magazine. 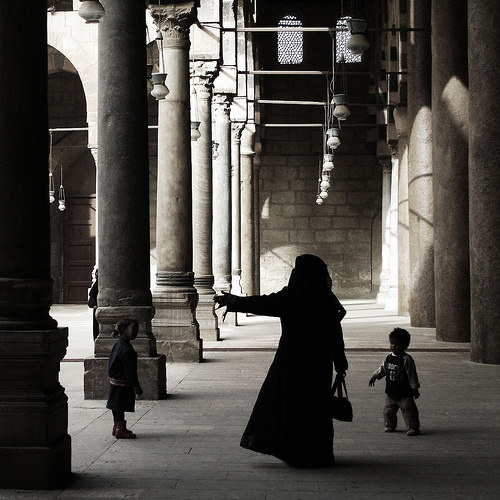 How much do you really know about the niqab? An insider guide to common misconceptions.

1. The niqab is a symbol of female subjugation.

None of the niqab-wearing women who I know, wear it because they have been forced to. They see it as an act of devotion to their Creator: the culmination of a spiritual journey. In fact most of them are women who were born and brought up in the UK; many are White or Afro-Caribbean Muslim converts to Islam who have chosen to observe it. The hijab, niqab and abaya are outer garments and are worn only when outdoors or in the presence of men who are not close relatives and so, contrary to popular belief, underneath their robes, in family and female-only settings Muslim women are often very fashion conscious and outgoing. They dress in everyday clothing; they get their hair done, go on holiday and even buy lingerie!

2. Women who wear the niqab cannot possibly contribute to society

People are surprised to hear that niqab-wearers come from varied vocational backgrounds. They include doctors, teachers, dentists, authors, social workers, university graduates, lecturers and more. They usually prefer to work in a female environment and so would not wear the face-veil all the time. Other women say that wearing the niqab actually makes them feel more comfortable when they are working with men. It is ironic that the very women who are the subject of debate are far from being a burden on society: they don’t get drunk and disorderly, don’t smoke and are likely to be very good citizens. Many of them are full-time mothers who take pride in raising well-educated children who will be an asset to British society.

The Qur’anic worldview presents a complete system of living, which permeates the daily lives of observant Muslims. This includes everything from rituals of personal hygiene, advice on neighbourly behaviour and animal rights to regulations for dress. Some women see the niqab as a religious obligation, others, as an act of worship following in the footsteps of notable Muslim women of the past. Numerous verses in the Qur’an contain directives for Muslim women’s dress, amongst them:

“O Prophet! Tell your wives and your daughters and the women of the Believers to draw their outer garments all over their bodies. That will be better, so that they may be known and so as not to be annoyed, and God is Ever-forgiving, Most Merciful.” (33:59)

The Qur’an was interpreted by the Prophet Muhammad (peace be upon him) and his disciples and their teachings form the basis of Islamic law. There are two orthodox schools of thought with regards to the interpretation of this verse. One orthodox interpretation is that it means covering the whole body including the face. The other school of thought is that, though not obligatory, covering the face is a virtue.

4. Wearing the niqab implies that all men are predatory

The Islamic worldview recognises that attraction between men and women exists and, if left unharnessed, has the potential to break down the moral fabric of society. It also acknowledges the physiological and physical differences between men and women and therefore Islamic legislation for dress and behaviour reflect these differences and aid adherents to avoid situations that could lead to extra-marital sexual relations. Hence both men and women have been commanded to lower their gazes and given directives on dress.

5. The niqab poses a security risk at banks and airports

By simply going to the side and showing their faces and ID to female members of staff, Muslim women who wear the niqab, have been, for decades, passing through airport security in major airports all over the world without cause for security concern. The same sort of arrangement can be made for any situation where ID needs to be checked.

There are many highly qualified and experienced Muslim teachers. A Muslim teacher, who wears the niqab, would not need to do so if men were not present, therefore many female Muslim teachers choose to teach women or children and uncover their faces whilst teaching.

7. Banning the niqab will free those Muslim women who are coerced into wearing it.

Banning the face-veil would be totally counter-productive: it would cause many Muslim women to feel targeted and persecuted and is likely to cause many talented women to withdraw from society. The majority of niqab-wearing women in Europe, wear it out of personal choice, so if, for the sake of a suspected minority, the niqab was to be banned, this would be clear discrimination against the majority. If we want to empower women from any community who are oppressed or abused, effective public services where such abuse can be reported need to be made more available and accessible to the women involved.

Article originally published in the Times Online; republished with permission from the author.

Response to Islam For Sale – How to Seek Knowledge

Why You Should Never Talk to Law Enforcement Without an Attorney