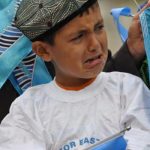 Remember the fall of Al Andalus, Muslim Spain in 1492 and how the Muslims were progressively forced to act as Christians to hide their identity?

Well, don’t we say that Histoy repeats itself? Believe it or not but the same thing is happening today, and about 8 millions Muslims can’t pray, fast and worship Allah swt as they want.

Here is an article of the Epoch Times that details the evil plan of the Chinese Government to harrass and restrict the Muslims in they daily lives:

Chinese authorities in Xinjiang Province have issued a notice that any Uyghur cadres or workers found not eating lunch during Ramadan could lose their jobs.

It is part of the campaign of local authorities in Xinjiang, home to the Muslim Uyghur ethnic group, to force the Uyghur people to give up their religious rituals during the fasting month of Ramadan.

Ramadan is a holy month in the Islamic calendar, which begun this year on Aug. 22. It requires not eating during the daytime.

“Free lunches, tea, and coffee—that authorities are calling ‘Care from the government’ or ‘Living allowance’—are being offered in government departments and companies. But it is actually a ploy used to find out who is fasting,” said Dilxat Raxit, World Uyghur Congress spokesman, speaking to The Epoch Times.

According to Dilxat, Uyghur Communist Party cadres throughout Xinjiang had been forced to sign “letters of responsibility” promising to avoid fasting and other religious activities. They are also responsible for enforcing the policy in their assigned areas, and face punishment if anyone in these areas fasts.

For the first time, Dilxat said, the crackdown has extended to retired Communist Party members. Current cadres are required to visit them to prevent them from participating in the fast. If anyone violates the ban, local leaders will be held responsible and severely punished, he said.

Muslim restaurant owners are forced to sign a document to remain open and continue selling alcohol during Ramadan or have their licenses revoked, he said.

Uyghurs arrested during the July riots in Urumqi are also prohibited from fasting; those who insist on fasting will be force fed food and water while enduring insults for their misbehavior, he said in the interview.

Monks in mosques are forced to preach to others that fasting is a “feudal activity” and harmful to health, said Dilxat. Otherwise, their religious certification will be cancelled.

When asked about Chinese Communist Party (CCP) leader Hu Jintao’s recent visit to Xinjiang, Dilxat said: “Xinjiang’s situation has not yet returned to normal. Rather than asking the local Han people to respect the religion and culture of Uyghur people, Hu encouraged the use of military troops to suppress and further restrict our religious freedom. The communist regime often talks about ‘maintaining stability,’ but what they do is always different from what they say. They are actually the ones who are destroying stability.”

An Epoch Times reporter contacted the CCP’s State Ethnic Affairs Commission to see whether the restrictions claimed by Dilxat were official, or what the official stance on Ramadan was. The media contact wouldn’t speak on the subject, instead giving two numbers in Xinjiang that he said the reporter would be able to call to find out more. Both numbers were continually busy, and when the reporter called the State Ethnic Affairs Commission back, the man hung up.

The directives are communicated on official Web sites in the region, however.

While you are enjoying your delicious meal during iftaars, the great nights of ibadaah in the masjids, pleas let us not forget our brothers and sisters in need, who can’t even fast and pray freely. May Allah swt give victory to the Mu’minoon and give Sabr to those suffering around the world.