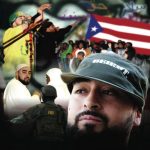 Jason Perez had two dreams when he was growing up: that he would either end up dead before he was 21 or in prison. According to Perez, both dreams came true, but neither in the way he might have expected. This is how the powerful new documentary, The New Muslim Cool, begins. The director of this film, which will air on PBS stations as the premiere for the new season of P.O.V. (a series which features acclaimed ‘Point of View’ documentaries), Jennifer Maytorena-Taylor originally set out to explore the culture of Muslims engaged in hip hop which has been developing over the last several years. Eventually, she decided to focus more specifically on the spiritual journey of Jason “Hamza” Perez, a Puerto Rican rapper from the East Coast who is part of the M-Team rap group.

While the film does show scenes of Perez rapping and features music as part of the soundtrack, there is also a lot of silence and stillness in the movie. The movie is not about Muslim hip hop, although you can obviously learn some things about Muslim hip hop from watching it, but the film is about one man’s spiritual journey. It is deeply effective and moving in communicating that journey and letting the viewer in on scenes that are both particular and specific but at the same time deeply universal.

As a convert myself (although one with a different background than brother Hamza) who has spent most of my fifteen years as a Muslim in inner city masajid, this film is by far the most accurate and sympathetic portrayal of the Muslim convert experience in the American inner city that I have ever seen in the media. It is especially effective at capturing the warmth, closeness, and diversity of those small potluck gatherings of Muslims in the inner city that are among the fondest memories and deepest spiritual experiences that I have had as a Muslim. The film effectively captures both the social closeness and profound worship experiences that make it easy to see why someone would be attracted to such communities. Many will recognize the the warmth and truth in the many scenes of Hamza interacting with his non-Muslim family members, who are for the most part accepting and supportive, but who are also confused and a bit perplexed by their family member’s new lifestyle, about which they do not have that much background.

At the same time, the film does not shy away from the harsh realities of life as a new Muslim, especially in the inner city communities. Like many converts, Hamza was drawn to Islam by a burning desire to work for justice and to find a spirituality that could truly bring him peace and help him in that struggle.

As Hamza matures and deals with the responsibilities of marriage and raising his children, he has to balance his idealistic zeal and global vision with the responsibilities and hassles of day to day life. He has to deal with law enforcement that is suspicious of almost everyone that comes from his background and whose wariness is only increased by the fact that he is now a politically outspoken and very obviously observant Muslim in the post 9/11 reality. Hamza has to grow and mature as he deals not only with the struggles of his personal and family life, but grows to interact with a variety of people from different religious backgrounds and viewpoints. Issues surrounding finding an appropriate spouse, integrating families and children from prior relationships, interracial relationships among Muslims, and dealing with people’s past lives before Islam are all issues which are constants in family and community life amongst American converts and are dealt with in a very real and affectionate way in this film.

Like any great film, the story told here is very particular to brother Hamza’s experience: to his Latino background, to his participation in a particular jam’aat, to his inner city east coast environment, yet at the same time so many of the issues are universally recognizable across boundaries of different religions and ethnic backgrounds.

From the perspective of a Muslim viewer, the film was tremendously uplifting. It wasn’t uplifting because there was a happy ending where all of the conflicts and struggles were resolved and life became easy. In fact the film is tremendously effective in communicating the continuous nature of struggle that Hamza has gone through and which will continue to await him in the future.

As I mentioned earlier, the film has many moments of quiet and silence, of Hamza walking to the masjid, or walking to his house, that pulls the viewer in to his experience and allows you to really feel you are participating in the spiritual journey depicted in the film. It was, in the end uplifting, because it was incredibly clear that Hamza found the spiritual tools to deal with the struggles he was going through in the Islamic tradition. Hamza does not mature through walking away from the tradition, but he develops new perspectives on relationships with others through studying the life of the Prophet (saw). Woven throughout the film are clear indications that Hamza draws upon the spiritual sustenance of daily prayer, study of the religion, and obedience to the commandments of Allaah in order to navigate through the practical struggles that surround him.

I hope that this is the first of many different media works that can effectively communicate the positive role that the way of life of Islam plays in so many lives in America today. I can’t imagine a better form of da’wah or of promoting simple human understanding and empathy among people of different backgrounds.

DISCLAIMER: There is music in the film and Hamza Perez is part of a musical group. The film shows these aspects of his life but shows many other aspects as well. The issue of music in Islam is not dealt with at any length in the film. Hamza Perez is part of an Islamic Jama’at that is serious about studying and following Islamic fiqh, but he mentions in the film that one of his teachers approved the idea of using rap music as a form of da’wah and he proceeds based on that understanding. I truly believe that one can believe that music is clearly haraam and would still benefit from seeing this film. However, of course, one should be warned that there is music in the film and therefore one should only watch it knowing that ahead of time. I should also mention that I have met Hamza Perez on several occasions and also know some other people who were involved in advising on this film but I had nothing to do with the film myself nor have I met the primary filmmakers….I’m not claiming to be objective anyway.

You can get more information on the film here. Look out for screenings in your area and the PBS premiere broadcast will be June 23.