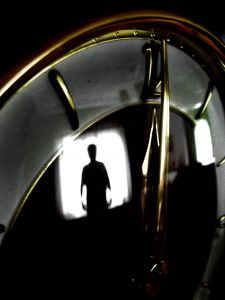 You know those Sci-Fi films where the protagonist receives an unexpected visit from their future self, heralding grave news of a disastrously sticky end if they don’t do an incredibly important task, that can conveniently be achieved within the 75 minute remainder of the movie?

The kind of scenario that always throws up the problem: “Well, if they complete the mission, then that version of the future will no longer exist. Therefore the character won’t be able to return to the past to warn themselves about avoiding said disaster. But without such a warning, the bad things will happen anyway. Ah, but then if they… no, that won’t work… unless they manipulate the space-time continuum…? Yes! No. Wait… using the graviton emissions of a nearby worm hole…. perhaps… Multiverse theory would allow… would allow… wo- Oh look: time for Hollyoaks!”.

Anyway, I experienced something like that this evening, at a sisters-circle I attended – but in reverse.

The topic was: “Remembrance of Allah: What does it really mean?”.

We covered the basics of how remembrance is more than just the dhikr you recite on the prayer mat, after salat. It’s in your words, your actions, and the thoughts you have in between. It’s in the everyday, mundane activities that all human beings must engage in to survive, or at least, to have what they consider to be a ‘normal’ life.

I remained surprisingly quiet for the first half of the gathering. Normally, that is something I consciously aim for – or should I say, fight for. My nafs is always screaming to be the centre of attention. However, my usual urge to loudly express my opinions over that of others, was largely absent. I almost felt a little disconnected from my surroundings; I had to give myself a mental slap every now and then, in order to wake up and give proper attention to the discussion at hand.

Then, we arrived on the issue of time wasting. The sister next to me – a friend who I’ve known for a while now – began to share an anecdote:

“I don’t want to embarrass anyone here by mentioning some good advice I heard a few years back, at the circles we used to have at Oxford House. A sister there mentioned how much time we waste in activities we don’t consider to be harmful. For example, flicking between TV channels, trying to find something to watch. How much time do we spend on that? If we thought about it before hand, i.e., ‘Will this bring me closer to Jannah, and further me from An-Nar’, would we do it at all?”

She then turned around and looked at me.

“What? Are you talking about me? Did I say that?”, I asked, confusedly.

She responded in the affirmative.

I was amazed. Amazed that, one: I still can’t remember saying anything of the sort (though I can definitely imagine ‘past me’ doing so); and two: that the advice stuck with my friend so well, that it actually altered her actions to a degree, and she can quote me several years later.

However, what scares me more than my memory fail, is the fact that ‘present me’ doesn’t speak like that much, any more. I still believe in the same realities, but my beliefs are a lot more internal; almost muted. When I hear other people using that kind of language, it doesn’t seem as natural as it once did. Like, I would have to flip a switch inside my mind to think like that again.

The good news is that change is within my grasp, insha’Allah. I can be rebuilt; I have the technology. And best of all, it won’t cost me six million rupees. [Note: this hilarious sketch briefly features a non-hijabi (from 1:18-2:02, to be exact)]

Attending circles, such as the one above, are a start. They’re a low pressure way of easing yourself back into the habit of remembering Allah openly, without fear of embarrassment. I am really happy to have been invited to spend time with this new group of people. I pray that their company is of the beneficial kind – even if it’s only for two hours, every fortnight.

Further, I pray that I am now treading the path to a better me. A wiser, more spiritual me.

Pearls of Wisdom from al-Imam ibn Hazm: On Praise and Criticism

The Spirit of Yusuf (as)