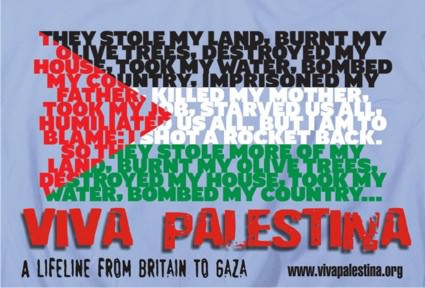 Those signed up to the Viva Palestina e-mail updates will have already been notified of the great news. After five thousand, arduous miles, and various troubles encountered at the Egyptian border (as detailed by sister Yvonne Ridley’s report below), the convoy of aid has finally reached Gaza. Alhamdulillah wa ‘Allahu akbar!

Please continue to support the convoy with your prayers, words of encouragements, and donations.

And they entered side by side like heroes, some on foot some in their vehicles, tears, smiles, hugs, flowers. It was historic, it was legendary. Gaza we are here. We have fulfilled the promise – Viva Palestina! The lifeline from the people of Britain to you, the people of Gaza, has arrived.

We have broken the barriers, we have opened closed borders, we have defied the odds,we have overcome the challenges across thousands of miles and three continents. We are here to be with you, to embrace you, to share your tragedy with you.

After another morning of intense negotiations, a deal was reached to allow all of the members of the convoy to go through. In the end, Viva Palestina had to make the sacrifice of agreeing that some vehicles will have to cross the border from the Al Ouja Israeli controlled crossing point. This includes our mascot, the fire engine and the boat. This was due to the restrictions imposed by Egyptian law governing the Rafah Crossing.

A tearful Talat Ali told me that ‘Rafah is the most beautiful crossing in the world’, he also said that the time , effort and sacrifices put in by all the Viva Palestina family meant that history has been made today – on the day the prophet Mohammed (PBUH) was born.

George Galloway made an emotional speech thanking the people of Gaza for the wonderful reception and assuring them that for Viva Palestina and in our millions, “WE ARE ALL PALESTINIANS!” George also reiterated that the people of Palestine have voted and that their voice should be respected.

Today the convoy will head along the Salah Eddine road towards Gaza City witnessing along the way the destruction and death caused by the Israeli war machine. Along the way they will be greeted by the people of Gaza who will know that Viva Palestina is here and that they will NEVER BE ALONE.

The last 24 hours have probably been the blackest since the Viva Palestina convoy set off from London.

Yesterday the convoy members became the target of an orchestrated wave of violence first started by Egyptian police and then culminating in vicious attacks by unknown thugs.

The end result was a number of peace activists whose only aim is to take humanitarian aid into war torn Gaza were treated in hospital for head injuries.

Mercifully the string of casualties was not too serious but the experience denied us the chance of fulfilling our mission to deliver aid to Gaza yesterday.

And dramatic images of the rioting and attacks could not be relayed to Press TV viewers because someone sabotaged the satellite van by deliberately cutting through a vital cable which would have beamed the shameful attacks across the world.

However, every cloud has a silver lining and I would like to take this opportunity of personally thanking the Egyptian authorities and those dark forces who tried to derail Viva Palestina.

The event has only served to make us stronger, unite and bond us together more and created a wave of international media interest in Viva Palestina.

I think it would be fair to say that when you bring a diverse group of 300 plus people together on a gruelling mission to cover 5,000 miles driving across North Africa the result can result in a less than harmonious state of affairs.

To be frank, there was friction and infighting and some of us generally got on each other’s nerves as you would when you are confined to close quarters with challenging living, sleeping and eating conditions.

However, the deliberate bloody-mindedness of the Egyptian authorities did something we had failed to do for ourselves … it caused us to unite, bond and emerge stronger than ever from underneath the rows of police batons, bricks, bottles and stones.

The trouble began when the police – who were only obeying their orders – tried to break up the convoy into small groups of medical and non medical aid.  We were told the first would go through the Rafah crossing while the latter would go through an Israeli checkpoint.

This was never going to be accepted by anyone on board the convoy. Our aim from the outset was simple: Rafah or bust.

Giving aid to the people of Gaza has nothing to do with the Israelis and I do wish they would stop trying to make themselves centre stage in an affair that does not involve Tel Aviv.

As we dug in our heels about the convoy being physically divided, the authorities decided there was only one solution – batter us into submission, after all that is what police states do.

And so, when the police tried to get physical, the convoy members followed their natural instincts and used passive resistance to defend themselves.

Egyptian police are obviously not used to confronting stroppy westerners in such large numbers and so they retreated while a second wave was sent in. Hundreds of riot squad officers, wearing visors, carrying shields and batons tumbled in to one of the two car parks in a large town centre compound in the port of al Arish and set about the unarmed peace activists.

They too were heroically repelled  and what followed was an uneasy stand off as some convoy members received medical attention.

The net result was scores of vehicles had been able to escape the compound in which they were being held behind metal police barriers.

It was a minor victory and what followed was a very British response – the lads decided to have a game of football. I did try to persuade the Egyptian police to join in stressing they would have much more fun kicking a ball instead of kicking my comrades, but they seemed reluctant to let go of their batons.

As the night drew in the convoy leader George Galloway who was 40 kilometres down the road, was made aware of the battle of al Arish and so he refused to cross the Rafah Border in to Gaza and returned to the convoy.

It was a hard call to make as the international media had gathered at Rafah for a party that never happened. As usual the Israelis also played to stereotype by shelling and bombing parts of Gaza.

Suddenly the area was plunged into darkness by a powercut which coincided with a brick, bottle and stone attacks on the convoy members by youths in their late teens and 20s. Seconds before the lights went out some convoy members saw a couple of unidentified men scrawling anti-Hamas slogans on lorries.

The lights remained out for some minutes, during which time the vicious attack was unleashed – the whole proceedings failed to warrant one single Egyptian police officer to swing his baton into action.

Those who had wielded their sticks with such a passion before, stood impassively by and watched the onslaught.

The power kicked back in again and the bright lights illuminated the scene to reveal several convoy members lying dazed and confused, blood dripping from gaping head wounds.

While they were ferried to hospital for treatment, there was a second powercut and a repeat of the violence.

Once again the police stood by and watched the thugs launch their attacks on unarmed and defenceless members of Viva Palestina.

Galloway, incandescent with rage held an urgent meeting with the governor of the region and secured assurances this would not happen again. He also secured a pledge that the convoy would be allowed to make its way to the Rafah crossing for 6am on Monday.

We’re now only a few hours away from that deadline and it remains to be seen if the governor will keep his word.

But regardless of what he decides I want to thank him for pulling every single member of Viva Palestina into one, united front.

Thanks to him and the cack-handed police operation, Viva Palestina has emerged refocussed and stronger than ever with one, determined goal: Rafah or bust.

And it will happen, inspite of the best efforts of Tel Aviv meddling and Egyptian authorities’ bullying.

The people united can never be defeated.

* British journalist Yvonne Ridley and award-winning film-maker Hassan al Banna Ghani are on the Viva Palestina convoy making a documentary about the journey from London to Gaza. her website is www.yvonneridley.org and you can follow her updates by Twitter or Facebook

Related Topics:charityGazaIsraelpalestineViva Palestina
Up Next

A Right to Free Speech or A Moral Obligation?