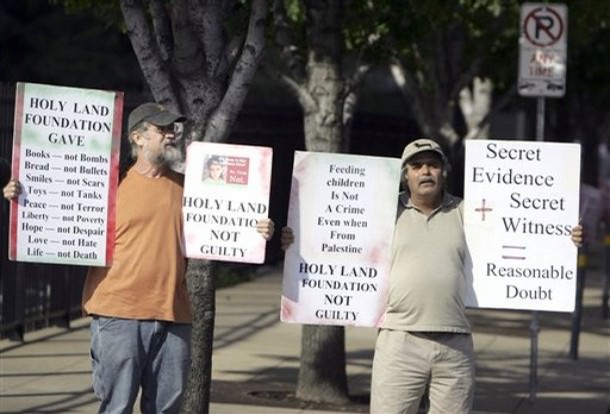 It’s with great sadness that we heard about the verdict of the Holy Land Foundation trial. I find it absolutely appalling that they can convict someone based solely on circumstantial evidence and an anonymous witness. It really begs the question if such a witness would be allowed to testify, in an expert status no less, if the accused had been anything other than Muslim.

May Allah (swt) free them, make this a means of forgiveness for them, and grant them and their families patience and Jannah.

Article by Laila al-Arian, posted on AlterNet and reproduced here with her permission.

On Monday afternoon, a jury in Dallas, Texas found five Palestinian men guilty of more than 100 charges in the nation’s largest terrorism financing trial since 9/11.

But was this case about prosecuting terrorism, or the Bush administration’s “war on terror?”

Prosecutors never argued that the charity, the Holy Land Foundation for Relief and Development, or any of its officials were ever involved in violence, either through funding it or directly participating in it. Instead, they told the jury that the charity sent money to schools, hospitals and social welfare programs that were controlled by Hamas, a group listed as a terrorist organization by the US State Department since 1995.

Edward Abington, the former number two intelligence official at the State Department (and ex-US consul in Jerusalem), told jurors he was never told that the Palestinian charity committees supported by Holy Land were part of Hamas in the daily intelligence briefings he received. In fact, these same charities, or “zakat committees,” still receive donations from the U.S. Agency for International Development and the International Red Cross.

This was the second trial against Holy Land. Last year, the government’s case ended in embarrassment and defeat when jurors returned after 19 days of deliberations with no guilty verdicts. At least one of the defendants would have been completely acquitted had a juror not changed her mind at the eleventh hour, backing out of her decision to acquit when the judge polled the panel about their votes. Another juror later said she refused to discuss the evidence during deliberations, simply explaining that she relied on her “feelings.”

The stark differences between the two juries became apparent at the conclusion of the second trial. “Twelve good American citizens in the first trial didn’t convict anyone of anything,” Linda Moreno, one of the defense attorneys on the case, told the Associated Press. “And 12 good American citizens in the second trial convicted everyone of everything. If you can make sense of that  explain it to me.” (Ms. Moreno was an attorney for my father, Sami Al-Arian, in his 2005 trial).

Over fervent objections from the defense, the judge in the Holy Land trial allowed the prosecution to present testimony from an anonymous Israeli intelligence agent. This bizarre episode marked the first time in American legal history that testimony has been allowed from an expert witness with no identity. If the witness, who was introduced to the jury simply as “Avi,” lied or committed perjury, he faces no consequences. He is officially non-existent, after all.

Though the prosecution ostensibly limited their case to Palestinian charities operating in the present day, most of the evidence presented to the jury involved the general activities of Hamas, and dated back decades. With its propaganda-like quality, the evidence was clearly intended to provoke an emotional response. For example, jurors were repeatedly shown videos of grisly suicide bombings that none of the defendants were in any way connected to, or accused of planning.

William Neal, who served on the first Holy Land jury, raised disturbing questions about the prosecution’s tactics in an interview with Dallas radio station KRLD 1080. “They never proved — they kept trying to show us stuff around the case, not the case. They presented to the jury, you know these committees, these organizations controlled by or on the behalf of Hamas, but they kept showing us blown-up buses and they kept showing us little kids in bomb belts reenacting Hamas leaders,” he said. “It had nothing to do with the actual charges. It had nothing to do with the defendants.”

I went to Dallas a week before the verdict to cover the case, and found a group of Holy Land supporters a block away from the federal courthouse where the case was being prosecuted. There, I met Diane Baker, a 62-year-old ordained minister with blonde hair and a rail-thin frame. On her lunch break from her job as a hospice chaplain, she came to the vigil wearing blue hospital scrubs and her colorful Reverend’s stole.

“When we carry the burden of others, we wear this,” she said, pointing to the cloth wrapped around her neck. “There were days when I left the courtroom with tears in my eyes, but I’m hopeful.”

I called Diane a day after the verdict and asked her how she felt. “I was shocked,” she said. “And I felt a great deal of grief, especially for the families, who I know.” Speaking of the defendants, she said, “These people have done what their hearts has called on them to do.”

Hadi Jawad, a member of the Hungry for Justice coalition, an umbrella group of Holy Land supporters, said the U.S. government has taken sides in the Palestinian-Israeli conflict through their prosecution of the Holy Land Foundation.

“It’s about demonizing an entire people — in this case, the Palestinian people,” Jawad told me. “They’re saying that they’re not worthy of aid and help, even when they’re destitute, hungry and need medical attention.”

Holy Land was the largest Muslim charity in the United States when the Bush administration shut it down in December 2001. On the heels of the September 11th attacks, Bush, Ashcroft and company wanted to show they were fighting the “war on terror” by pointing to the Holy Land case, and the arrest of its five officials. In an unusual move, prosecutors unveiled the list of more than 300 un-indicted co-conspirators, something that is kept secret under normal legal protocol. Many of those on the list were respected Muslim leaders who were shocked to find they were under suspicion for involvement in terrorist acts.

Mustafaa Carroll, the director of the Dallas chapter of the Council of American-Islamic Relations, warned the Holy Land verdict could send a chilling effect over America’s already traumatized Muslim community. “Muslims are concerned about how this is going to affect them,” he told me. “By criminalizing charity, it may even have an impact on American charities in general. People are really afraid.”

Laila Al-Arian is a Washington DC-based journalist. A graduate of the Columbia Graduate School of Journalism, she has written for The Nation, United Press International, Huffingtonpost.com and the Washington Report on Middle East Affairs. She is the author, with Chris Hedges, of Collateral Damage: America’s War Against Iraqi Civilians (Nation Books). She can be reached at Lailaa@gmail.com.