By now you’ve probably seen the video of Gayle Quinnell, the (in)famous John McCain supporter who at a campaign rally in Minnesota who called Barack Obama an Arab, citing that as reason to not trust him. Well, it goes on further. A correspondent from the theuptake.org who interviewed Quinnell right after the rally said the following in this YouTube video.

Quinnell cited that she obtained the “information” on Obama being an Arab at “her local library” and from a pamphlet obtained at a local McCain campaign office (provided by a fellow volunteer not the campaign itself). She has taken it upon herself to redistribute the information as widely as possible by making copies of the pamphlet and sending it to random names in the phone book.

What’s sad here is not just that racism and hatred towards Muslims backed by political powers is being openly spread in this country, but also the widespread ignorance of our people. When I saw this, the first thing I felt was embarrassment, thinking, “man, are our citizens lost! I think I feel embarrassed to be an American!”

Alhumdulillah, this story actually got some pretty good coverage in the media as of late. The other day I saw a democratic political analyst on CNN reprimanding McCain and Palin for not taking measures to stop this type of mentality which exists amongst their reporters in the first place, which was a refreshing change to see on the air.

But what really takes the cake is some commentary by Campbell Brown of CNN from her “Cutting Through The Bull” on the issue. She says McCain was right in setting the record straight about Obama, but goes on to speak out against the ignorance and racism of people like Quinnell, right on national television! Here’s the commentary in both written and audio form (jazaAllah khair to MM staffer Ahmad AlFarsi for the find). 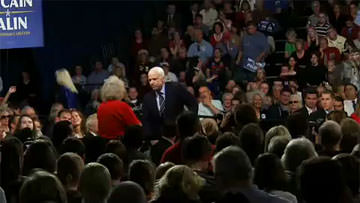 NEW YORK (CNN) — You may find it hard to believe that this remains an issue in this campaign, but it does.The candidates, both candidates, are still getting questions about Barack Obama’s ethnicity and religion.

Yet just a few days ago, there was a woman at a rally for John McCain incorrectly calling Obama an Arab:

Woman at rally: I don’t trust Obama. I have read about him and he’s an Arab.Sen. John McCain: No ma’am, no ma’am. He’s a decent family man, citizen that I just happen to have disagreements with on fundamental issues. That’s what this campaign is all about. He’s not, thank you.

Now, I commend Sen. McCain for correcting that woman, for setting the record straight. But I do have one question — so what if he was?

When did that become a disqualifier for higher office in our country? When did Arab and Muslim become dirty words? The equivalent of dishonorable or radical?

Whenever this gets raised, the implication is that there is something wrong with being an Arab-American or a Muslim. And the media is complicit here, too.

We’ve all been too quick to accept the idea that calling someone Muslim is a slur.

I feel like I am stating the obvious here, but apparently it needs to be said: There is a difference between radical Muslims who support jihad against America and Muslims who want to practice their religion freely and have normal lives like anyone else.

There are more than 1.2 million Arab-Americans and about 7 million Muslim-Americans, former Cabinet secretaries, members of Congress, successful business people, normal average Americans from all walks of life.

These are the people being maligned here, and we can only imagine how this conversation plays in the Muslim world. We can’t tolerate this ignorance — not in the media, not on the campaign trail.

This bit reminds one of the civil rights movement of the 60s, where slowly but surely, the media began to cover the isolated incidents of oppression towards African Americans in the news. Sure, it was because African Americans began their own networks which reported the incidents, thereby forcing major media networks to cover them as well, but the point is, the coverage eventually made its way over.

I hope more voices like these are heard on the airwaves, with the intent to clearly expose falsehood from truth. Not just domestically for us Muslims, but inshaAllah one day on a foreign level, as well.

On Mice, Mashaayikh, and the Media