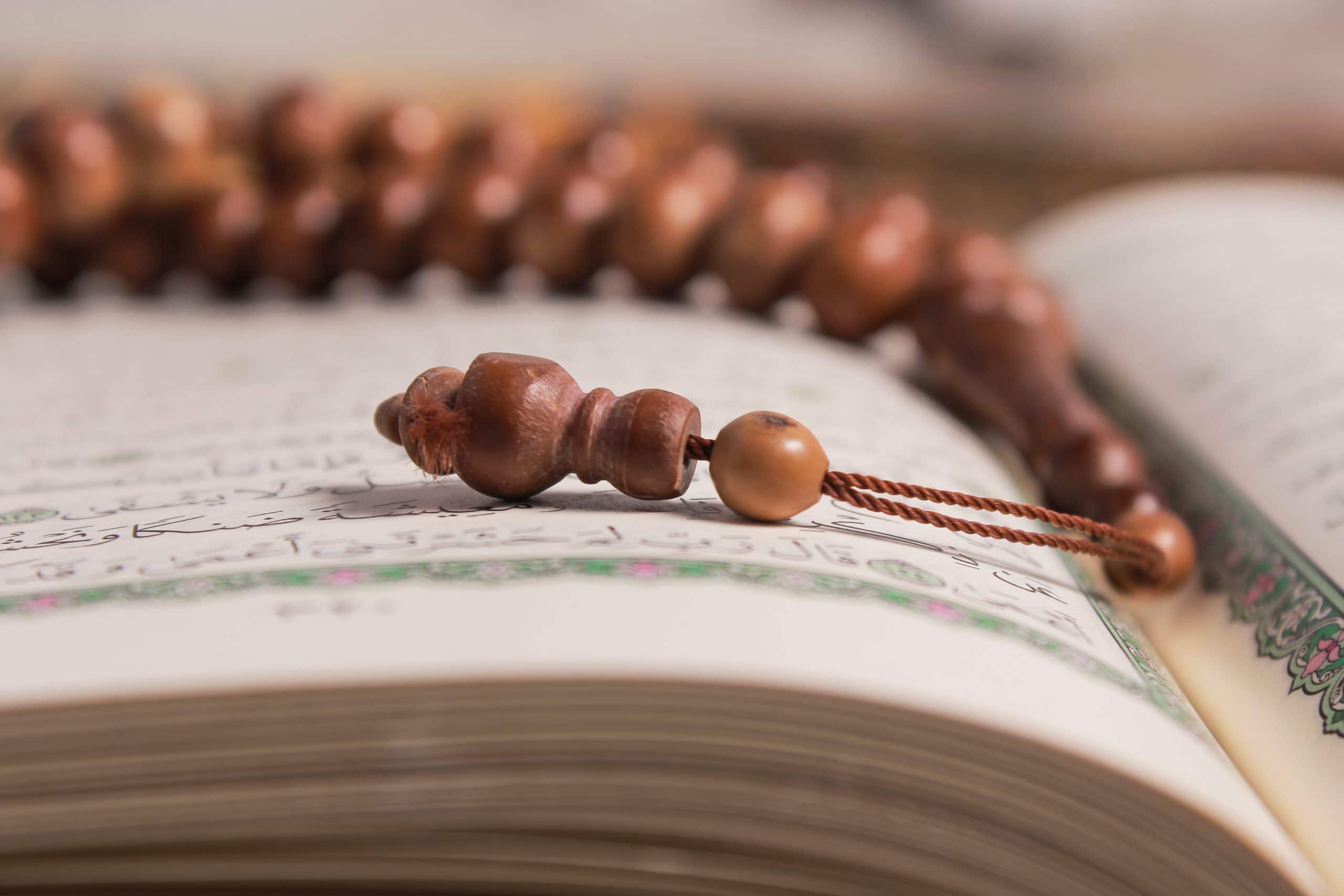 In the Name of Allah, the Most Merciful, Bestower of Mercy

“(It is) the month of Ramadan in which the Qur’an was revealed as a guidance for mankind, clear proofs giving guidance, and the Criterion (for distinguishing right and wrong). So whoever of you witnesses this month, let him fast it.” [2:185]

“We sent it down on a Blessed Night: We have ever been sending warnings.” [44:3]

And he states, “Whoever prayed at night during it (Ramadan) out of sincere faith and hoping for reward, then all his previous sins will be forgiven.” [Agreed Upon]

These are three opportunities that we have been given to attain forgiveness for all our sins. The spiritual doctors of the heart are in agreement that fasting softens the heart, making it more receptive and humble to the recitation of the Qur’an. Perhaps this is the wisdom that links together fasting and night prayer, the two most distinctive acts of worship in this month.

It is important to note that our relationship with the Qur’an in this month should not be limited to just the nightly Tarawih prayers, we must devote ourselves to studying the Qur’an outside of prayer as well. 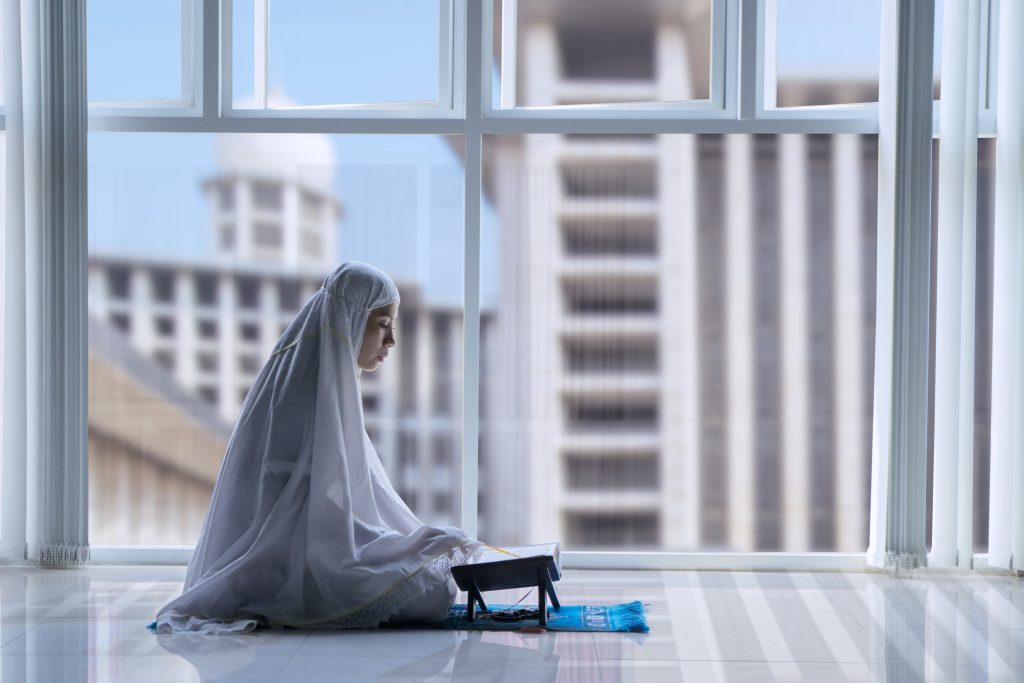 Young Muslim woman reading the Quran in the Ramadan time. Shot in the mosque

that the Prophet (صلى الله عليه وسلم) told her in the last year of his life, “Jibril used to revise the Qur’an with me once every year, but this year he has revised it with me twice. I do not suspect but that my time has come. And you shall be the first of my household to join me.”

Our Relationship with the Qur’an

Unfortunately, the majority of us do not have any relationship with the Qur’an. Since we are in Ramadan, the blessed month of the Qur’an, and the devils have been chained up, now is the opportunity to change this sad state of affairs.

Given the state of most Muslims today, any discussion about the maximum recommended amount to read daily, in Ramadan or outside Ramadan, would be purely academic. I doubt any of us will attempt to read the Qur’an 60 times every Ramadan as Imam al-Shafi’i used to do or to spend the night reciting the entire Qur’an in a single rak’ah as Uthman b. Affan did (yes, it’s authentic; in fact, Sa’id b. Jubayr and Imam Ahmad have done it as well). I won’t regale you with all the narrations about how much the Salaf used to recite the Qur’an during Ramadan, both inside prayer and outside it (for those interested, you can probably find them all over the internet already anyways). 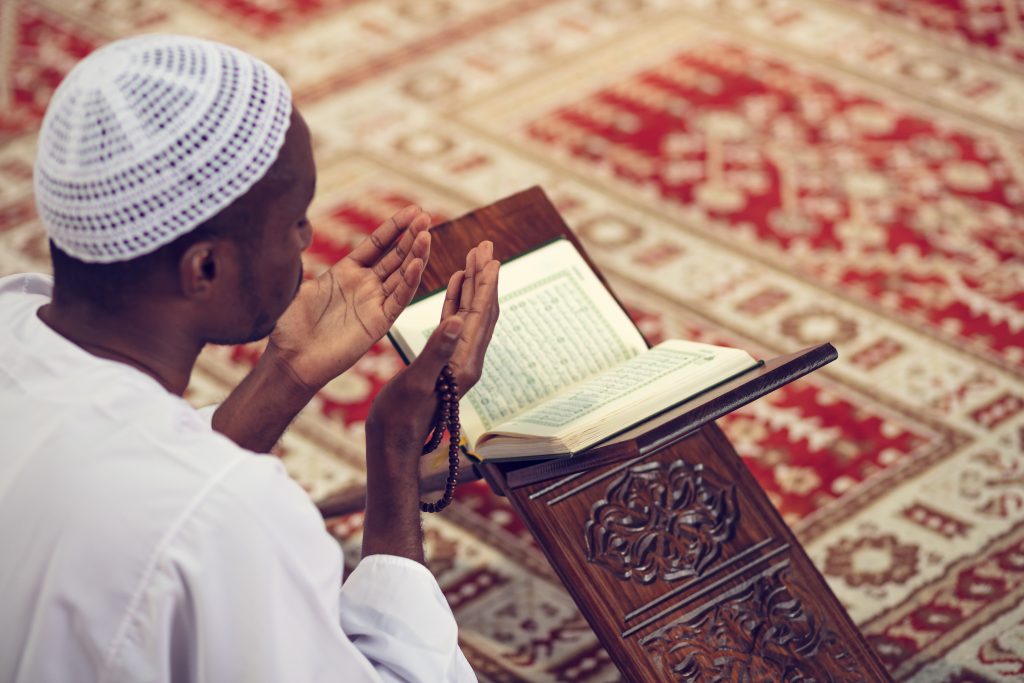 To do as they did is something far beyond any of us given that most of us hardly read the Qur’an at all. However, as a side note, I would like to share this one account for all of us to ponder:

The Khalifah, Walid b. Abd al-Malik, used to complete the Qur’an every three days and he used to read it a full seventeen times during Ramadan. [See his biography in Siyar A’lam al-Nubala’]

Now, to the real issue, what should we do to rectify our situation?

If you have not been reading the Qur’an during Ramadan in the past, then decide how much time you can reasonably take out of your schedule to read Qur’an daily. Don’t push yourself to do too much, otherwise, you’ll end up right back where you started: not reading the Qur’an at all.

Also remember, “The most beloved deeds to Allah are those done regularly, even if they are small.” [Agreed Upon]

Therefore, you must make a Ramadan schedule that you can stick to.

Is There A Minimum One Should Read? What Do the Scholars Have to Say?

Some scholars – such as Imam Ahmad and Ishaq b. Rahuyah – have disliked for a person to not complete the Qur’an at least every 40 days, based on a hadith of `Abdullah b. `Amr in which the Prophet (صلى الله عليه وسلم) instructed him to recite the Qur’an in forty days. Another narration gives the minimum as once a month. However, this should not be taken as something obligatory, particularly for those who are not in the habit of reading the Qur’an at all or are not proficient in reciting the Qur’an, such as new Muslims.

For them to attempt, all at once, to start reading the entire Qur’an once a month would probably become a barrier to them reading the Qur’an at all.

I asked Sh. Ghassan al-Barqawi about this issue and he recommended that, as a bare minimum, one should study ten verses a day. He based this on the narration of ibn Mas’ud that the Companions used to learn the Qur’an ten verses at a time.

How Should One Proceed?

Since the hunger and thirst brought on by fasting softens the heart and makes it more receptive, this is an excellent time to try and read and contemplate the Qur’an. For that reason, I would highly recommend not merely reading the Qur’an, but studying it. It was the Sunnah of the Prophet (صلى الله عليه وسلم) to study the Qur’an nightly with Jibril. It was this sort of thoughtful study of the Qur’an that had an impact on the quality of the Prophet’s (صلى الله عليه وسلم) deeds. He was already the most generous of all human beings, yet the study of the Qur’an in this month increased him in generosity.

For those who know Arabic, I would highly recommend that as they read the Qur’an, they refer to a short Tafsir. In particular, I would recommend one of the following:

You should make it an eventual goal to finish the Tafsir, preferably highlighting or marking all the important points you come across for quick reference in the future. The idea is to be able to read the Qur’an such that the explanations offered in the Tafsir become ingrained in your mind. This will make your Qur’an reading easier, more enjoyable, and more thought-provoking. It is also an excellent foundation for any future Qur’an study.

For the English only crowd, it is important to read the Qur’an along with a translation, as Allah tells us:

“It is a Book that We have sent down to you blessed, so that they may contemplate its verses and so that people of understanding may take heed.” [38:29]

It is good to recite the Qur’an, even if you do not understand it, but the ultimate purpose of its revelation was for us to imbibe its teachings and incorporate them into our lives.

It is important to pick a good translation that suits you. Personally, I like Pickthall. Sahih International and Muhsin Khan’s translation are also good. I should note, that while I am a big fan of Pickthall’s translation, his style of language may seem a bit archaic and therefore be unsuitable for some readers. In any case, it is probably a good idea to have two translations to refer to in case the meaning is not clear in one translation.

There is another translation out which is quite distinctive written by M A S Abdel Haleem and published by Oxford University Press. This translation has been written in very clear and extremely simple English that makes it easy and pleasurable to read. The downside is that he has given “creative” interpretations of some verses to make it more “suitable” to the Western mindset. For that reason, I am hesitant to recommend it. If one uses this translation, he should definitely cross-check it with a more reliable translation such as Pickthall, etc.

Maulana Mawdudi’s introductions to the surahs are also a useful tool.

They give you a good overview and background information for each surah before you begin.

Another useful resource, at least for research purposes, is the Summarized Tafsir ibn Kathir, available from Dar-us-Salam in ten volumes or accessible from here:

Unfortunately, there is no good, clear, short commentary on the Qur’an in the English language that I can recommend.

Finally, as closing advice, do not lose heart. Keep the following hadith in the back of your mind:

“Recite the Qur’an, for, on the Day of Resurrection, it shall come as an intercessor for its companion.” [Muslim]

Ar-Rayyan: Are you a club member?