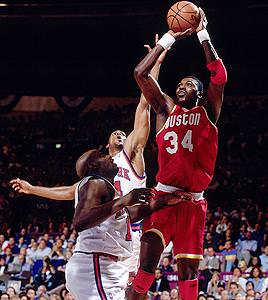 Hakeem Olajuwon is insha’Allah being inducted to the Hall of Fame today. Having grown up in Houston, I have fond memories of Hakeem and the work he did, not just on the court, but in the community as well. I remember a long time back he organized some basketball tournaments between the Houston masaajid, and the patience with which he would meet everyone at the masjid when they were asking for his autographs. I remember the Hakeem Olajuwon bottled water given out one year at Eid. And I still remember a story from Eid when a friend of mine saw him sitting on the floor before Eid salah and asked him for his autograph, and Hakeem simply told him after salah. In fact, I remember the reaction of all my friends and my family’s friends after the Rockets won the championship almost rivaling that of an Eid celebration.

I remember watching an afternoon game with the Rockets (I never missed a single game of theirs on TV when I was younger), and he was playing while fasting. It may sound a bit cheesy, but for someone at a young age to see someone like Hakeem the DREAM on national TV, fasting, playing at a high level without a single sip of water or Gatorade, and still dominating everyone – it leaves a lasting impression. I couldn’t tell you who they played that day or who won, but I remember – as a Muslim child – being proud of seeing that, and it being an inspiration to me to fast no matter what the situation.

He is one of the few Muslims who have reached bonafide celebrity status, yet, retained a positive reputation and image with the community at large. It is even more impressive, that Muslims and non-Muslims alike credit his character to his dedication to his deen.

Mario Elie, a former teammate of his on their championship teams, said about Hakeem in what I thought was a very interesting read,

I met Hakeem at the first practice after I got traded from Portland to Houston. I could tell right away what a good guy he was. He went about his business in a professional way. He was very quiet, but when you’re on a team, you get to click with all of your teammates. He was our star.

Off the court, he laughed and had fun. But once it was game time, he was focused, like a completely different person. I could count on one hand how many bad games he had during the time I was in Houston, and that’s saying a lot right there. He played at an extremely high level. Hakeem was an amazing leader. Going into Islam and getting deep into his religion really helped him with his discipline and focus as opposed to his prior years where had some problems. He prayed five times a day. During Ramadan, he didn’t eat all day (I think Shareef Abdur-Rahim does the same thing). The average guy had to eat and drink water during the course of a game. Hakeem got up at 5 a.m. to eat and then didn’t eat again until after sundown.

With an 82-game schedule with games starting at 7:30 pm, that’s hard. But it never affected his game.

He was our star, and guys counted on him every night to be that star, block shots, do what he did. He went out and did his job. He’s “The Dream” — he played hard whether he ate or not. It’s a credit to his mental toughness. But he kept his religion very personal. He never approached me about it. He’s very private and personal off the court. In our five years playing together, I may have seen him twice off the court. He was always in his hotel room. He wore his white gown, prayed all the time. I think soccer really helped him as a player. Dream is closer to 6-9, but played bigger than his height. He would play one-on-one with the guards, he’s that amazing of an athlete. He could run, had a jump hook, jump shot, the total package.

He doesn’t get the credit he deserves as being one of the best centers of all time. I keep hearing people put Shaq in front of him, and that’s an insult. Dream was an 85-percent free throw shooter. Shaq never led the league in blocks or won Defensive Player of the Year. It was a great time for centers, but the best of all those guys bar none, including Shaq, Robinson, Ewing, Alonzo … it was Dream. He was just a little better than those guys. There’s one memory from those days that really sticks with me. I always tell my friends this story. We were playing the Knicks in the Finals, and we were down 3-2 going back home.

At the hotel, I was distraught, talking about how upset I was about the situation. Hakeem’s hotel room was on the same floor as me. He and some of his Muslim buddies were cooking fish, smelling up the whole floor. I was so frustrated about the series, and when I walk out of my room, here comes Hakeem smiling like nothing had happened.

He said, “Mario, don’t worry about it, we’re going home.”

He was relaxed as could be, it just it lifted my spirits and made me smile.

The confidence this guy had in himself and our team raised us, it was amazing. I just smiled. In Game 6, he makes a last-second block, we win Game 7 and win our first title. I was amazed that whole summer after that end result. That will stick with me the rest of my life. Another time like that was when we were down 3-1 in Phoenix in the 1995 Playoffs. Hakeem was sitting next to me on the airplane. He looked over and said “Let’s go surprise them.” We ended up winning the series. It’s his confidence that made him the man he was and is. That’s what he did. When you look at him, he’s a pillar of strength and you could grab on to it. This induction is amazing. I’m also a big fan of Patrick, he’s a tremendous player and person. God is good. These guys battled in college, then in the NBA and now are entering the Hall together. I wish I could be there to support the guys, but Coach Carlisle is working me in Dallas. I’ll have to call Clyde after and find out how it went. I couldn’t be happier for Hakeem. He is a good man, and I love him.

Check out more of the Hall of Fame coverage and some highlights about Hakeem – including an article on his halal real estate investing.

Ar-Rayyan: Are you a club member?

Ramadan – Change We Can Believe In