After the Guide to Style and Rolled Up Couture, it might seem like I have an unhealthy obsession with reading about this online. This article though, was forwarded to me by our resident Shaykh Yasir Qadhi :)

The Wall Street Journal decided it was newsworthy enough to comment on the latest mainstream fashion trend of pants being hemmed above the ankles. The article and pictures are below.

After noticing other young men doing it, 30-year-old Victor Holguin recently started baring his ankles. When he wears jeans, he rolls them up, and he gets his pants hemmed short.

The New York-based real-estate broker admits that he sometimes gets “strange looks,” but he ignores them. “I like it,” he says. “It feels lighter, a lot more fashionable and fun.”
[promo image]

Changing hemlines have long been a hallmark of women’s fashion. But this summer, it’s men’s hems that are rising. Brooks Brothers has raised pant hems about half an inch in its top-of-the-line Golden Fleece suits and is leaning toward a slightly shorter pant length across its more moderately priced collection.

J. Crew has been featuring models in rolled-up, ankle-baring chinos. Traditional haberdasher Paul Stuart is producing suit trousers that touch the top of the shoe, rather than breaking slightly over the shoe.

The wide adoption of the look reflects a new era in menswear. As the number of menswear lines and designers grows and younger men pay more attention to style, men’s fashion trends are changing more frequently. In recent years, for instance, menswear brands such as Michael Bastian, Band of Outsiders and Spurr have emphasized slimmer-fitting clothes and helped such items as flat-front pants and skinny ties become significant new men’s styles.

“Guys are the peacocks again,” says Helen Job, director of content at fashion-consulting service WGSN. “There seems to be a feeling that men are getting a little more experimental and that things are speeding up from the time you see things on the runways to the time you see guys wearing the trends on the street.”

Style experts trace men’s rising hems back to 2004, when menswear designer Thom Browne’s signature look of shrunken suit jacket and cropped, ankle-baring pants made its retail debut at Bergdorf Goodman and then caused a stir a year later, when he started doing presentations during New York fashion week. The look was derided at first. But other designers eventually came around, and throughout 2006 and 2007, more designers, ranging from DSquared to Marc Jacobs, began showing shorter pants in their runway shows.

Fashion-forward American men, as well as trendy guys in Tokyo and Scandinavia, were among the first to jump on the high-water-pant look as early as 2005, says Ms. Job. Over the past year, the trend spread to Paul Stuart and Brooks Brothers, where Mr. Browne designs a line. This summer, it’s gone somewhat mainstream, with men of all ages trying it.

Mr. Browne, the designer credited with starting it all, admits that most men shouldn’t wear pants as short as he’s shown them on runways. The very short pants were meant to make a point, he says. “Sometimes you see guys with their trousers and you wonder who their tailor is…they’re way too long,” he says. “I tried to play with that and do the total opposite.” The perfect pant length, Mr. Browne adds, hits the top of one’s shoe, with no break, or crease across the lower pant leg.

The last time so-called floods for men were in style in the U.S. was the 1950s (with upturned tight jeans) and 1960s (with preppy pants rolled up on the beach). The ’60s also saw skinnier suits, with narrow-leg trousers that were shorter in length. Todd Snyder, J. Crew’s head of men’s design, says some of its looks were inspired by images of James Dean, Paul Newman and John F. Kennedy from the ’50s and ’60s.

Fans of the flood point out that it’s practical in warm weather, like rolling up sleeves on a long-sleeved shirt. Michael Williams, a New York-based menswear publicist, says higher pants also show off one’s shoes and unique details on the underside of rolled-up pants.

One proponent of the trend, Tommy Fazio, the men’s fashion director at Bergdorf Goodman, even buys some of his pants a size too short. He calls the trend part “hipster” and part “authentic preppy American.”

Conservative dressers should be forewarned. The look wouldn’t go over well in more staid professions such as law and accounting, says Lloyd Boston, author of style-advice books including “Before You Put That On,” and “Make Over Your Man.” In such offices, the highest dress pants should go is a slight break over the shoe, Mr. Boston says. Guys dressing for work in more-creative fields can go higher, but only slightly. And the look works best with casual trousers.

With dressier pants, the look becomes risky. “The more formal the fabric, the more it looks like a mistake,” Mr. Boston says. “You start to go, ‘Did his dry cleaner make a mistake or did he outgrow them?'”

Even a flash of ankle is too much for some men. Jeff Amato, a 40-year-old geology professor at New Mexico State University, shortened most of his pants earlier this year after seeing a picture of himself with fabric bunched up at the bottom of his pants. Though his pants are not high enough to bare his ankles when he’s standing, the higher hems “take getting used to,” he says. “When you are walking or sitting down, you feel like things are too high.”

Some men may want to see if the trend has legs before getting pants hemmed. An interim step: rolling them up. “When you roll them up, you can unroll them if you change your mind or if the trend goes out of style,” says Tyler Thoreson, executive editor of men’s fashion Web site men.style.com. “You can’t do that with cropped pants.”

The flood look was inspired in part by ’50s style like Brando’s. 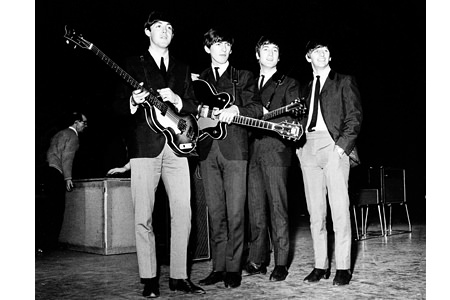 The ankle-grazing hem with slim-cut suits dates to mod styles of the 1960s. The look peaked among British youth before spreading across Europe and America. Coinciding with the recent return of ’60s motifs in womenswear, mod suit styles have peppered menswear runways the past few seasons.

Pictured: The Beatles, in London on Nov. 4, 1963, model the shorter-slacks look while at rehearsals for a royal variety show. 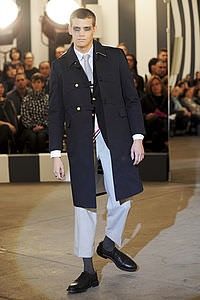 Thom Browne is widely credited with kick-starting the flood pants look, which he has produced for both his Brooks Brothers line and his signature collection.

Pictured: A look from the Thom Browne Fall 2008 collection. 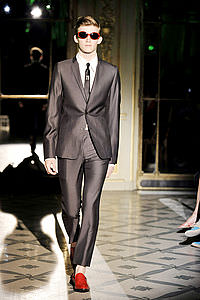 Men’s suits have hewed close to the body for the past few seasons. 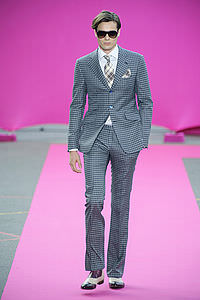 Some designers have played up the short-pant leg’s mod influences by creating suits in prints that reference 1960s aesthetics.

Pictured: A model in a bold checkered suit from Emanuel Ungaro‘s Spring 2009 collection. 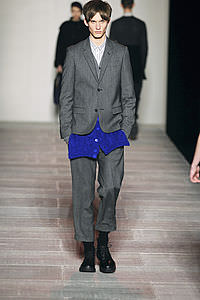 Short hems, including rolled-up and pegged cuffs, can also tap a 1980s look.

The Fall 2008 Marc By Marc Jacobs collection had several New Wave-inflected designs and palettes, including rolled-cuffs on baggy pants. 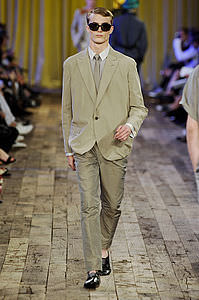 Islam Is the Cure for Racism