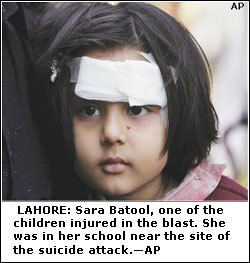 An older version of the article was mistakenly posted. The correct version is posted now. Sorry for any inconvenience.

It would be an understatement to say that the escalating wave of suicide bombings in is an acute threat to peace and a critical concern to the authorities. This aberrant social attitude towards death, destruction and opposition to authority can be very contagious among the mass and mimetic illiterate of a country who will start to believe that the only way of out unrest, anarchy and dissatisfaction with the administration is to create more chaos. The latest weapon in hand is suicide bombings and they are growing at an alarming rate.

So where did the cabal of suicide bombers start and why do these human bombs think like they do? The first answer that would come to mind, and one with a lot of weight, is that suicide bombings have their roots in Palestine. William Safire in his column in the New York Times wrote back in 2001, ‘the pride and joy of Arafat’s arsenal is a weapon of mass terror that has no known defense: the human missile’. But one might wonder why the bombers in are destroying their own country? The standard answer to this is often ‘it is outside elements that are doing this’ and ‘it is the helplessness of the masses that propels them to throw away their life like this’ or ‘extremist religious views are behind this’. But when the psychology of the bomber is studied it brings to light a far dangerous mentality. A mentality that can be programmed to go on killing even when there is no helplessness and even if there is peace and even if this destruction is to be unleashed against one’s own country. These bombers are less ‘outside elements’ and more of an army raised at home.

It is easy to put a religious label on these individuals but religion has little to do with it or their motives for taking their own lives. If religion has any role in the entire chemistry, it is only to have been used as the perfect blackmailing element to distort the image of right from wrong in the psyche of the bomber. Fact of the matter is, had the notion of religion been clear in the minds of these individuals, they would never be suicide bombers at all. So religion can easily be set aside as the primary reason. Robert Pape, author of ‘Dying to Win: The Logic of Suicide Terrorism’ has collected the first complete database of every suicide attack around the world from 1980 to early 2004 and writes that Islamic fundamentalism is not as closely associated with suicide terrorism as many people think.

Though the Tamil Tigers did hold the record for the most number of suicide bombings, they are now left behind by the Iraqi suicide bombers. The in reports 949 suicide bombers killing 10,119 and wounding 22,995 from the beginning of 2004 to March 2008. Author Abdul Hafez has tracked the data in his own separate study, ‘Suicide Bombings in ‘, reporting 1,800 suicide attacks globally since the start fo the phenomenon in the early 1980s. And out of these more than half have taken place in .

Then there is the idea that suicide bombers are but an irascible, uneducated brood who realize little the implications of their actions. That is a possible idea of the Pakistani bomber but since the profile of the Palestinian bomber has been studied meticulously, it would make sense to apply that same theory, at least to some extent, on our domestic bombers as well. The profiles of the Palestinian bombers might surprise the ones who believe that illiteracy has a lot if not everything to do with it. 47% of the suicide bombers had an academic education and an additional 29% had at least a high school education. 83% of these bombers were single. 64% of them were between the ages of 18-23 while most of the rest were under 30. 68% of the suicide bombers came from the strip. So yes, frustration and helplessness has more to do with the motives than anything else but again there is more to their psychology than this otherwise the thousands of frustrated would start resorting to become human bombs.

There are two main purposes of the suicide bomber; to spread terror and to disrupt peace. But then an onlooker would wonder, aren’t there other ways of doing this besides the extreme act of killing yourself? In this respect the social psychologist Albert Bandura (Tangled Roots: Social and Psychological Factors in the Genesis of Terrorism by Jeffrey Ivan Victoroff) presents the very interesting and most relevant notion of moral disengagement. He states that terrorists such as suicide bombers are not abnormal individuals or psychopaths who lack morality not are they hungry to spill the blood of innocent people indiscriminately. Rather on the contrary they are very normal people who under certain circumstances and inducements are capable of selectively extricating their moral code to engage in extreme inhumane conduct. In the case of the Pakistani suicide bomber this inducement would be that the only way to stop the democratic process would be to rip the country apart with anarchism and a ‘revolution’. The carrot to the rabbit in the case of the Pakistani bomber is also the notion that democracy is synonymous with subservience to the .

Bandura writes, ‘Just as soldiers can go to battle to fight and kill for their country, terrorists can engage in violence to promote a cause. To be sure, soldiers must be trained to overcome their inhibitions to kill others, but this behavior modification is not seen as immoral by most societies’ indeed, it is rewarded with medals, venerated in public ceremonies and idealized as heroic sacrifices when soldiers are killed in actions. Similarly, terrorists can frame their violent deeds as moral acts in the service of their people, country or God’. But at a notch much higher than religious justification, it is when suicide bombers start placing this act on par with duty to their country, it tends to spread like wildfire in the society just like it is doing in the Middle east and just like it has started in .

Bandura also interestingly presents eight mechanisms of moral disengagement through which moral agents tend to justify cruel acts. These agents are moral justification, exonerating comparisons, blame attribution, euphemistic labeling, displacement of responsibility, diffusion of responsibility, disregard or distortion of consequences and dehumanization. Even the presence of a couple of these agents are enough to spur the individual toward killing himself for his cause but when the majority of these agents start working overtime to create the scenario of moral disengagement the phenomena can only result in a snowball effect where extempore, contagious and violent terrorism and suicide bombings start being considered a norm in a society that is hurtling towards higher levels of this ‘moral disengagement’. Bandura also proposes that the intensity of these mechanisms is shaped by the social, political and cultural contexts that can facilitate or hinder their effectiveness in rationalizing violence. Had Bandura exclusively scrutinized the growing wave of suicide bombings in within these parameters, he might even have reasserted this premise.

In exploring the moral mental stand of suicide bombers one would find it to be very similar to that of soldiers. Just like the act of killing by soldiers is morally acceptable, similarly the killing by suicide bombers, themselves and others, is also acceptable. Similarly just as dead soldiers are revered by their counterparts, dead suicide bombers are revered by the other people of his tribe as well. As if unraveling the actual psychology of these bombers was not an uphill task enough, the other factors that work against striving to find solutions to the crisis is that these suicide bombers have mushroomed on an already muddled and chaotic political scene. Consequently, in the society would have to work towards dismantling not just one or two of these elements of moral disengagement as a recourse to a solution but rather nearly the entire eight of them as outlined by Bandura.

Even if one was to disregards Bandura theory of moral disengagement, which personally makes a too much sense for me to ignore given the social and cultural background of the Pakistani suicide bomber, we could try taking another route to explain it all but even that would fail to shed any remnant of light on this bleak scenario. Political Psychologist Jerrold M. Post (Leaders and Their Followers in a Dangerous World: The Psychology of Political Behavior) maintains that there are two distinct personality types among the extreme terrorists; the anarchic-ideologue and the nationalist secessionist. The anarchic-ideologue is the result of a dysfunctional family and rebels against their parents taking on political conditions such as poverty and injustice as being equivalent to parental authority and hence they rebel against these situational conditions by engaging in suicide bombings and other terroristic activities. On the contrary the nationalist-secessionist is a loyal child obedient to authority but rebels against social and political conditions he associates with the suffering of his family. Still other theories regarding suicide bombers and similar terrorist make a marked deviation from the personality based theories and insist that social factors play a bigger role in creating terrorists, ‘terrorism does not result from dysfunctional or defective personality traits; rather it is largely a result of societal influences and unique learning experiences that form the foundation of functional character traits or behavior tendencies’.

Not to sound like the eternal pessimist, in our case no matter which route we take, we end up at the same point because whether we try to analyze the crisis with psychological theories or social ones, both are fertile enough at the moment to account for the growing rise of terrorism and particularly suicide bombers in . What this should mean for the government is that suicide bombings in Pakistan should not be taken as a terroristic fad but rather something that might only be a an extremely troubling tip of a more massive iceberg.

Terrorists on Murderous Rampage in Mumbai: As Muslims, We Condemn it