Sister Bint Ali sent us this document about Imam Qatanani, who has become yet another victim of Israel’s strong influence in this country. We should all support our Imams and our scholars in these times of fitnah. It doesn’t matter whether or not this Shaykh or that Shaykh is 100% inline with our individual methodologies. We have to recognize these dua’at for the work they are doing, and for what our communities will lose if they leave. There are specific actions below that you can take in order to join this fight against injustice. -Amad 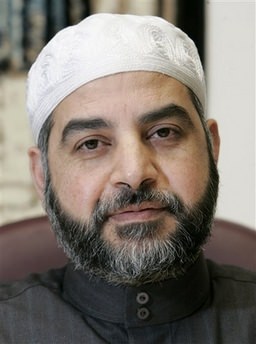 “I’ve seen with my own eyes a gentleman who’s had a tremendous positive influence in the community…he’s done nothing but good since he’s been in the US and many of us are ready to stand up and go to court to testify about him if need be.”

A Scholar in our Midst
Born in Palestine, Imam Dr. Imam Mohammad Qatanani immigrated to America in 1996 with his family. With a doctorate in Islamic Shariah, internationally known for specializing in Minority Fiqh, two ijazahs, and numerous of other impressive credentials, he was well qualified to lead the town of Paterson, home to the second largest population of Muslims in America.
Indeed, he had a colossal task awaiting him. Nevertheless, he confronted the issues of the community head-on, executing his duties with unsurpassed excellence. Whether it was the daily classes or even just the simple short talks after Fajr and Isha, his massive amount of knowledge left the audience gaping in awe. Truly, knowledge elevates the status of its carriers.

A Beacon of Inspiration
If his classes were in Arabic, he would make sure that a translator would be there to simultaneously translate his words into English for the countless non-Arabic speakers who also frequented the masjid. Furthermore, he paid special attention to those new to the faith, fostering bonds of love and companionship. In addition, he realized the importance of safe guarding the youth, for he wistfully saw in them the leaders of tomorrow. This led to the birth of new attractive programs, and as a youth, I can tell you that they were the most amazing and awesome programs I have ever been involved in.
Just briefly, for one particular two-month summer program, all participants were divided into teams of about eleven kids, and basically the teams had to attend all the summer events and pray each salah in the masjid to gain points. The programs were separate for boys and girls and included horseback riding, swimming, workshops about CPR training, memorizing Quran, deep sea fishing, sewing, gardening, how-to-give Dawah workshops, sports, soup kitchens, masjid cleanup and construction, boys giving short talks after salah, and so much more. And at the end, the top five teams and every single one of their eleven members received lavish prizes such as IPod Videos, portable DVD players, Sharper Image Massage chairs, mountain bikes, and digital cameras. And this was only a two month program; throughout the year, they organized even more amazing events to entice the youth to come to the masjid.
In addition to the youth, Imam Qatanani focused on fostering stronger bonds between Muslims, regardless of their ethnicities. He never looked down at others from different backgrounds in contempt nor encouraged others to do so.
On the contrary, he would often strongly encourage the congregants to establish personal relationships with one another; to go beyond the simple “Assalam Alaikum, how are you”. The number of times he dedicated his daily talks for this purpose is countless. I personally made numerous lasting friendships due to his urging advice. And all of this happened over 12 years because of the unwavering diligence of one man. His efforts are beyond dazzling. Masha Allah

A Call for Tolerance
His unparalleled enthusiasm in educating the masses about the true essence of Islam sparked others to join him in this noble endeavor. Interfaith dialogue and open houses about Islam became extremely popular, and both Muslims and non-Muslims emerged from such events with stronger bonds of communication, understanding, and respect amongst one another. Christians, Jews, and Muslims sat next to one another, dining and exchanging realizations of the numerous similarities and healthy differences.
Additionally, prominent politicians, congressmen, law enforcement figures, sheriffs, and elected officials flocked to the Islamic center as per invitation of Imam Qatanani. This was a crucial step by him, all in efforts to increase understanding and tolerance. The mysterious haze surrounding Muslims suddenly began to clear up, and after the initial nervous step, many attendees soon became sincere friends of Imam Qatanani and ultimately of the Muslim community.

A New Home
Eying the unfinished work and the promising future that stood for his family, Imam Qatanani settled more comfortably in the country he began to love. He applied for permanent residency, but his application was rejected. And now he and his family face deportation. A man whose work has sent ripples of encouragement throughout even the national community is being forced to abandon the life he had worked so hard to build for the last 12 years.
The mere complaint is an unjust detainment by the Israelis in 1993 during a visit to his family in Palestine. Many other Palestinians like him were unjustly detained for no crime because this was a common practice by the Israelis whenever political turmoil arose in the area. Soon, he was released without any charges or any court summons.
The denial by the immigration officials has left the Imam and his family in a puzzling residency dilemma. Because of this, Ahmad, his eldest son, has been denied scholarship to an honors college medical program. In addition, neither the Imam nor his wife has been able to renew their drivers’ licenses for the past three years. From trips to school or even simple grocery shopping, the family has had to lean on community members to lend a helping hand. One particular night, his youngest daughter became very sick late at night. So he carried her and walked on foot all the way to the nearest hospital for the emergency room.

Friends till the End
Pained by Imam Qatanani’s situation and unwilling to let him go from the community, friends and colleagues started the Americans for Qatanani, a grass-roots coalition separate from the legal team. Within only a few weeks, Americans for Qatanani has raised over $100,000 for the effort and sent out petitions with over 2,000 signatures, and they show no signs of stopping. A recently launched website will also collect more signatures and donations from all across the globe. In addition, Americans for Qatanani plans on hosting rallies outside the court on the days of the proceedings, May 8, 9, and 12.
It breaks my heart to imagine life without the Imam, who is more than just an Imam. He’s the role model of the community, a treasure chest of knowledge, the one whom they asked for advice, the one through whom Allah had united the people, Muslims and non-Muslims alike. I have yet to see someone so influential, so eloquent, so patient, so compassionate, so amazing in all respects. We as a nation cannot afford to lose Imam Qatanani.

So, will you stand by him? Here’s what YOU can do to help: