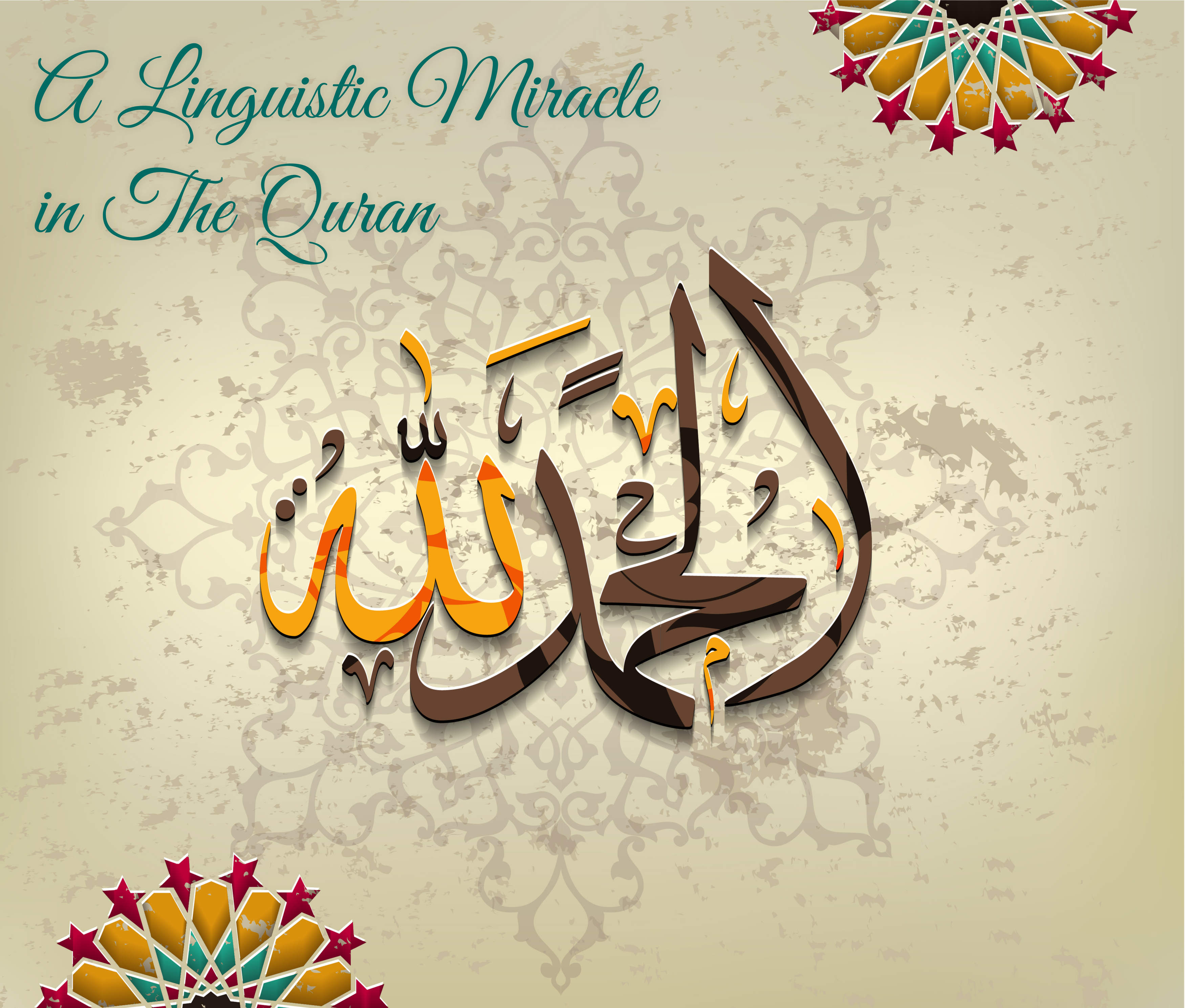 Writing about the literary dimension of the Qur’an for an audience that may or may not have background in Arabic grammar and rhetoric can be rather challenging. I’m going to attempt to navigate around technical lingo as much as possible. Building a basic familiarity with the subject is my goal, not presenting it in a sophisticated fashion.

The words AlHamdu Lillah are most commonly uttered from Muslim lips around the world. After the basmalah (the tag name used for BISMILLAHI ALRAHMANI ALRAHEEMI)¸ it is the first statement mentioned in the opening surah, al-Fatiha. One way to explore the beauty, precision , and thought provoking eloquence of the Qur’an’s words is to explore the very choice of each word. Arabic is a rich language full of terms similar in meaning.

Madh’مَدح : Praise + Mention of noteworthy qualities and actions attributed to someone or something.

Madh can be made for the living as well as the non-living, for beings of intellect (humans, angels, jinn) and animals.

Hamd is exclusively directed at the living & intellectual الحي العاقل .

Madh is possible before a noble deed or after (as a result of it). It is therefore possible to make Madh of a person who may not have done anything good and no good deed may ever have been attributed towards him/her.

Hamd can only be made after a noble/ praiseworthy contribution of some sort.

Conclusion: By using Hamd instead of Madh or Thanaa’

a. we acknowledge Allah as Eternally living

b. we recognize His attributes and decisions as Hamd worthy

c. There is an element of sincerity in our praise of him stemming from love and reverence.

d. we not only praise His incredible being, attributes & works, we appreciate them as favors for which we are grateful

Shukr (thanks) is a consequence of whatever good comes to a person from someone else.

Hamd is a consequence of good that whose effects go beyond an individual favor.

Shukr is exclusively related with favors and doesn’t include appreciation or praise of any noteworthy attributes. For instance you don’t thank someone for being smart or wise or athletic.

Hamd is made because of favors and also over noteworthy attributes even if they don’t benefit oneself directly. For example I say Alhamdu Lillah when I hear that my friend passed his midterms or something.

a. Madh is too wide in scope and using it wouldn’t be precise enough.

b. Shukr is too narrow in scope and using it wouldn’t be comprehensive enough.

The Word ALLAH in alhamdulillah

We looked briefly at the choices that would have represented alternatives to the word Hamd in the divinely revealed phrase AlHamdu Lillah. Let us now take a look at the word Allah itself. It is the unique name of our Lord. We learn through His revelation that He possesses and rightfully owns the best Names and Attributes (thank you Sheikh Yasir for your awesome class!). Why is it most appropriate to use His unique Name in this phrase rather than AlRahmaan (the exceedingly merciful), Al Khaaliq (the creator) etc.? Simply because any of these names might imply that His Hamd is associated with that particular power or attribute. By using the word Allah, Hamd is acknowledged for Him independent of any of His attributes, OR for all of them simultaneously!

A Variety of Ways to Make Hamd of Allah

Arabic offers great flexibility in communication. There are varying degrees of emphasis with which a statement can be made. There are multiple options that can be manipulated in sentence structure. Similar statements can be made such as :

1. All of the above are Jumal Fi’liyyah. This sentence structure necessarily implies the occurrence of an act bound by time. Alhamdu Lillah is Jumlah Ismiyyah which, for one, is a far more emphatic form of declaration in Classical Arabic by comparison. Secondly, it implies continuity, stability and permanence. Another unique feature of the Ismiyyah structure is that it communicates a decisive statement.

2. Jumlah Fi’liyyah exclusively attributes an act to a specific subject. In the suggested alternatives above, ‘I’, ‘we’ and ‘you all’ are the specific subjects respectively. الحمد لله , being a Jumlah Ismiyyah, doesn’t identify the subject which makes it a universal declaration. I, we, you, they, people, animals, rocks, trees, rather all of creation can be understood as the subject! There is another beautiful subtlety here. Whether anyone or anything makes حمد of Allah or not, الحمد is still for Allah!

4. In Jumlah Fi’liyyah there is the possibility of doing an act for an object that isn’t worthy of it. For instance, ‘I paid him’. It may be that ‘he’ didn’t deserve to get paid. In Jumlah Ismiyyah the necessary implication that this praise is actually rightfully placed is naturally implied, ALHAMDULILLAH!

5. In saying الحمد لله , we are also acknowledging that حمد is the property of Allah while this is not implied in alternative fi’liyyah renditions. When using the command form, ‘Praise Allah’ instead of Alhamdulillah, there are a number of shortcomings. Firstly, there is the sense that this praise is being asked of the audience. By comparison الحمد لله declares the existence of حمد without dependence on an audience responding to an imperative. The imperative may also imply a response that may or may not be voluntary while Alhamdulillah is an observation of the voluntary praise done by all forms of creation.

Why the ‘Al’ in Alhamdu?

ALHAMDU is definite or proper as I like to call it in my intro course. As Dr. Fadel puts it in his article, the Al serves the meaning

The distinguished, universally acknowledge form of Hamd known among you belongs particularly to Allah. The ‘AL’ also serves the implication of ‘istighraq’, a kind of absolute totality (All Hamd is Allah’s). None of these enhancements would come forth in the indefinite version HAMDUN.

Why Not Inna Alhamda Lillah?
Have you ever heard a khateeb say INNAL HAMDA LILLAHI? The word INNA means ‘certainly’ and is used to emphasize a statement. What benefit would there be in NOT emphasizing ALHAMDU LILLAH in the Fatiha? You see, Arabic sentences are divided and categorized from different angles and perspectives. One of these angles is Jumlah Khabriyyah vs. Jumlah Insha ‘iyyah. What this categorization basically means is that statements in the language are either declarative (which can be judged as either true or false) or they are statements communicating an emotion. The latter are a form of subjective communication which don’t necessarily communicate facts, but rather they serve to vocalize feelings and sentiments. When a statement has INNA, it can only serve to be informative and the emotional dimension of it is removed. By not stating the INNA, the phrase retains informative and emotional potential depending on the context. Think of it this way: If a bus whisks by you missing you by half an inch and you say ‘ALHAMDU LILLAH’, you are not really making a statement of fact, rather vocalizing your internal feelings. The emotionally charged dimension of AlHamdulillah is kept intact by not using the INNA.

In Hajj season we say ALLAHU AKBAR wa LILLAHI ALHAMDU! We reverse ALHAMDU LILLAH with LILLAHI ALHAMDU. This is a form of TAQDEEM in Arabic grammar and serves to color a sentence with a shade of exclusivity, ‘ Hamd belongs ONLY to Allah’. It is appropriate particularly on the occasion of Hajj because that blessed house was misused for Shirk so in response a strong denial of it is implied even when we say LILLAHI ALHAMDU. This TAQDEEM also serves the function of IZAALAT ALSHAK ‘removing doubt’. Why now say it this way in the Fatiha then? The context of the Fatiha is not one that demands the removal of doubt. Also, exclusivity exists in response to a challenge to the original statement. If somebody is attributing Hamd to Allah and other than Him, he or she should be taught that Hamd is ONLY for Allah. The Fatiha is not a response in debate with those who falsely associate with Allah. But we do find LillahilHamdu in the Qur’an. Interestingly, it appears in Al Jathiah: 36

The context, unlike fatiha is one where disbelievers who credit life and death to other than Allah. Here, the exclusive, emphatic mode of declaration is more befitting so we see LILLAHILHAMDU. The Fatiha declares certain universal truths that are completely in line with the embedded fitrah (natural pre-disposition) you and I are born with. In our fitrah there is no competition between belief and disbelief, tauheed & shirk, iman & kufr. Rather our faith is an unchallenged manifest truth seeded deep within our conscience. In Fatiha, this truth is therefore uttered in a fashion (ALHAMDULILLAH and not LILLAHILHAMDU ) that doesn’t even indicate the existence of an alternate point of view because within our genuine conscience, there isn’t one.

Expressions for Giving And Getting Help in the Qur’an

The Literary Beauty of the Qur’an

Nouman Ali Khan is the director of the Bayyinah Institute. He is well known for his contributions in the fields of Arabic and Quranic studies - most recently starting a full time on-campus institute for this purpose in Dallas, TX.