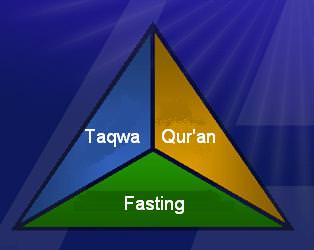 The Triangle of virtue- Part II: The Qur’an and Taqwa

There is no doubt that the Qur’an is the book of Allah, His eternal word and divine miracle. Muslims know that and believe it with all their hearts. They know it was sent down to Muhammad, salla Allahu alayhi wa sallam, in order to guide humanity to the straight path which leads to success in this life and in the Hereafter.

“A. L. R. a Book which we have revealed unto thee, In order that Thou might lead humanity from the depths of darkness into light – by the leave of their Lord – to the way of (Him), the Exalted In power, worthy of all praise!”

Allah, subahanahu wa ta’aala, has set the criterion of reward for the Day of Judgment. Taqwa and righteousness will be the key to the heavenly bliss so long as the principle of Tawheed is intact.

“…Verily the most honored of you in the sight of Allah is (he/she who is) the most righteous of you…” AlHujuraat 49:13

Therefore, it is not surprising that the concept of Taqwa and righteousness is mentioned constantly and continuously in all the divine revelations.

“For Allah belongs all that is in the heavens and the earth. And truly We have enjoined on those who were given the Scriptures before you, and you yourselves, that you shall all be God-fearing…” An-nisaa’ 4:131.

The early scriptures were ultimately sent down to serve the purpose of developing God-fearing individuals, and nourishing the concept of Taqwa amongst the followers of the Messengers of Allah.

“In the past we granted to Moses and Aaron the Criterion (for judgment), and a light and a ‘revealed’ reminder for the God-fearing –AlMuttaqeen.” AlAnbiyaa’ 21:48

Then down came the Injeel –Gospel- of ‘Isa with the same message. Allah says:

The Qur’an came down lastly to confirm the previous revelations and to reaffirm the religious guidance they once provided to their followers.

“To thee We sent the Scripture in truth, confirming the Scripture that came before it, and as a guardian over it…” Al Maa’eda 5:48

Taqwa, as stated previously, was one of the main objectives of this revelation, the revelation of the Qur’an. Allah subhanahu wa ta’aala says:

“(It is) a Qur’an in Arabic, without any crookedness (therein): in order that they may become righteous (achieve Taqwa).” Az-zumar 39:28.

The Qur’an, being the last testament and the final revelation Allah sent down to mankind, made its call to build God-fearing people very clear.

In a basic search of the paradigm of the Arabic word تقوى or ‘Taqwa’ we find over 230 locations in the Qur’an. More than half of this number is found only in the first third of the Qur’an, according to the order of the Mus’haaf.

The subject of Taqwa was covered thoroughly in the Qur’an in different ways. In the form of command Allah mandates Taqwa for his servants:

“O ye who believe! Fear Allah As He should be feared, and die not except in a state of Islam.” AlImran 3:101

This explicit command is repeated frequently in the Qur’an. There are many Ayat in the Qur’an that begin, “O ye who believe! fear Allah.”

Taqwa was mentioned in the Qur’an as one of the injunctions Allah prescribed upon those who preceded us, as explained earlier, and hence was perceived as one of the highly praised qualities of the righteous throughout time.

Those who acquire Taqwa are those who believe in the revelation:

“And He who brings the truth and He who confirms (and supports) it – such are those who are righteous.” Az-zumar 39:33.

They follow it and benefit from it. Allah says:

“And this is a Book which We have revealed as a blessing: so follow it and be righteous, that ye may receive mercy.” Al An’aam 6:155

And they realize the good revealed within its verses. Allah says:

“To the righteous (when) it is said, ‘What is it that your Lord has revealed?’ They say, ‘All that is good.’ To those who do good, there is good in this world, and the abode of the Hereafter is better and truly excellent indeed is the home of the righteous.” AlNahl 16:30

The Qur’an is a source of guidance to those who are truly God-fearing. Allah says:

The whole of Al Qur’an was revealed as an admonition and a reminder to the Muttaqeen –the righteous and those who are God-fearing. Allah says:

“But verily this ‘Qur’an’ is a reminder for the Muttaqeen, the God-fearing.” AlHaaqa 69:48

“We have already sent down to you verses making matters clear, an illustration from (the story of) people who passed away before you, and an admonition for those who fear Allah.” AlNur 24:34

Ultimately, the Qur’an is a divine message that promotes Taqwa and those who have Taqwa benefit most from the Qur’an.

The relationship between Taqwa and the Qur’an has been established. Therefore it is not surprising to add this virtue of the Taqwa-Qur’an relationship to the Fasting-Taqwa and Ramadan-Qur’an triangle.

“Ramadan is the month in which was sent down the Qur’an as a guide for humanity, and also clear (signs) for guidance and Judgment (between right and wrong)…” Albaqara 2:185

Ibn Katheer rahmahullah says in his commentary on this Ayah:

“Allah praised the month of Ramadan beyond other months by choosing to send down the Glorious Qur’an therein.”

The most favorable act of worship performed in this month is recitation of the Qur’an. Occupying oneself with the Qur’an in Ramadan has been the tradition of Muslims, scholars and laymen, throughout the history of Islam. It is the Sunnah of the Messenger of Allah, salla Allahu alayhi wa sallam.

Ibn Abbas narrated: “Allah’s Apostle was the most generous of all the people and he used to reach the utmost in generosity during the month of Ramadan when Jibreel met with him. Jibreel used to visit him every night of Ramadan to revise (in another narration: to teach him) the Qur’an. Allah’s Apostle was the most generous person, even more generous than the strong, bountiful wind (in readiness and haste to do charitable deeds).” Bukhari and Muslim.

The Sunnah of Qiyam and Taraaweeh prayer, performed every night throughout the whole month of Ramadan, is another manifestation to the virtue of the Qur’an in Ramadan.

Narrated Abu Hurayrah, the Messenger of Allah said: “Whoever prays at night in Ramadan out of faith and in the hope of reward, his previous sins will be forgiven.” Bukhari and Muslim.

In the hadith of Jabir, radiyallahu anhu, the Messenger of Allah explains the concept and significance of Qiyam, stating: “Qiyam –night prayer– is the long ‘Qunoot’ -standing.” Muslim.

Imam AlNawawi, rahimahullah, asserts that: “The meaning of ‘Qunoot’ in this hadith is the long standing in recitation. This is what all the Ulama agree on.”

Jibreel, alyhis salam, used to review the Qur’an with the Messenger of Allah every Ramadan and in the last year of the life of Muhammad, salla Allahu alayhi wa sallam, he did so twice. Since then, the Muslim Ummah started the tradition of Khatm Al Qur’an –the recitation of the whole Qur’an – every Ramadan.

There is an abundance of reports regarding the tradition of the Ulama and pious predecessors regarding their approach to the Quran in Ramadan. Some reports might seem strange and difficult to understand. People used to count sixty full Khatma for Imam Ash-shafi’ee in Ramadan. Imam Az-zuhri used to stop the sessions of hadith and direct his attention in Ramadan to the Qur’an.

During the month of Ramadan, the Qur’an becomes the theme and focus of this Ummah. Ramadan is the month of the Qur’an and the achievement of Taqwa is its purpose. All this is sought so as to develop God-fearing individuals who will then become citizens of a God-fearing society.

There is no better chance to achieve the triangle of virtue than the opportunity that Ramadan presents. No wonder! When Jibreel said to the Messenger of Allah: “May his nose be rubbed in dust; one who experiences Ramadan and in spite of that does not enter Jannah. Say ameen.” The Messenger of Allah replied: “Ameen”.

2- The Qur’an and Ramadan

The 27th Night of Ramadan at al-Masjid al-Aqsa

On Giving Zakāt al-Fiṭr As Money Instead Of Food

Sh. Yaser Birjas is originally from Palestine. He received his Bachelors degree from Islamic University of Madinah in 1996 in Fiqh & Usool, graduating as the class valedictorian. After graduating, he went on to work as a youth counselor and relief program aide in war-torn Bosnia. Thereafter, he immigrated to the U.S. and currently resides in Dallas, Texas. He is also an instructor at AlMaghrib Institute, where he teaches popular seminars such as Fiqh of Love, The Code Evolved, and Heavenly Hues.