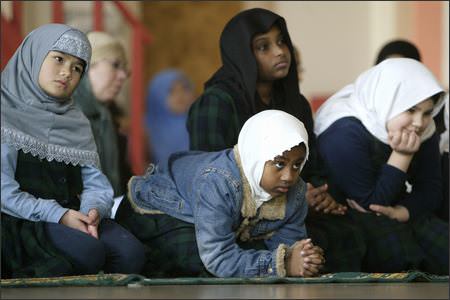 Nine kids, one to join in September. One “from” Turkey (new friend, Mariam, “she always sticks with me!”), 2 Pakistanis, 2 African-Americans, 1 Egyptian and 3 others that I forget (but Reem remembered). All the kids were actually born and raised in America (so very much “Americans”), but the perception of the kids’ “origins” is a nuance that I best leave for another post. [Note: The image on the left is a “generic” one, not of Reem’s friends]

Tuesday, 9/4/07, was an exciting day for my family… especially for my 10 year old daughter Reem. After being home-schooled for the last several years, it was the beginning of the “trial” period at an Islamic school in the area. So, we sat down to talk about her first day, and I was able to commit to memory at least some details, esp. her new “best” friend’s name who “always” sticks to her.

On Monday, there was a buzz in the house about getting Reem’s school supplies, the “rush” that my wife and I had never faced in all of our parental lives. Why did we finally decide to send Reem to “real” school, (I placed the quotation marks because home-school is no less than real in my mind and the minds of many home-schoolers)? Well, first let me tell you the “not-reasons”:

No, it wasn’t because any of this. In fact, what home-schooling afforded her is the ability not only to be up to speed with secular studies (on a part-time schedule), but also to have the time to memorize the Quran and learn Arabic. So, all props to the home-schoolers and their parents for doing an incredibly hard job, usually with incredibly great results.

So, what was it? For many reasons…

Partly because my son, Abdullah, 7 is in his own ramp-up stage of memorizing the Quran, and needs more attention from his mother. My little one Jana, 2, is getting into her terrible-twos. And Umm Reem is in the final year of her studies at AOU.

Or perhaps it was due to my own biases of wanting to seek “normalcy”, of seeking “familiar grounds” in terms of schooling. Because I went to school, I wanted my kids to experience some of that magic as well. There is no doubt that human beings find comfort in whatever they are familiar with. It gives them that soothing sense of “been there, done that”. I wanted Reem to be in the company of a “steady friends”, those that she sees everyday, not on special occasions. I wanted her to learn the art of team-work, of group-projects, of listening and following teachers’ instructions, of feeling the sense and responsibility of homework, and all the other little life lessons that come in a brick and mortar school.

Perhaps it was because I felt that Reem had too much intellectual and creative energy that she was not able to expend at home, and which was making her both irritable and irritating (sorry Reemo). The fact that she wanted to have “accomplishments” that she could share and be proud of in front of, and with other students.

Possibly and likely it was a little of everything that I have described above. Regardless, I could find as many reasons for home-schooling in the West as for sending kids to ISLAMIC SCHOOLS (public schools is an altogether different issue). I do believe that kids can accomplish a lot more with the attention of the parents at home than what can be gathered in a school environment with all its distractions. So, there are pros that Reem will now miss out. But, then there are other pros of the brick and mortar schools that I want her to start catching now. Perhaps, a good mix is what Reem went through– 5 years of home-schooling, memorizing Quran, learning Arabic and part-time secular studies. And then the remaining through possibly high-school in an Islamic school. In some ways, it would be similar to constructing a grand building atop a solid foundation. Then again, I mentioned that this is a “trial” period… I will report back in an year!

Whatever it is, it matters little… I look forward to learning all of Reem’s classmates’ names and helping out with Math (her real weakness, which drives me nuts considering my own training as an engineer!). Oh, one more thing… I am just tickled pink about my first PTA (parents-teachers meeting)!
—————

What do Teachers Make?