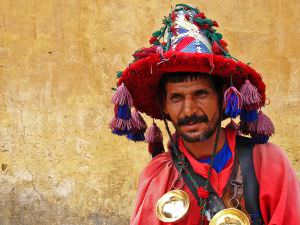 I thought I should address an important issue with which I have been blessed with some moderate level of expertise, namely, a Muslim man’s fashion sense. I have been motivated to write this after seeing many men coming to the Masjid clothed improperly, or wearing things that they might be embarassed to even go to bed in. We live in a society where your appearance is oftentimes the first-impression left on people, and with the Muslim image as it is, we should do everything we can to improve that image.

From ‘Abdullah Ibn Mas’ood (radiyallaahu ‘anhu) who said that the Prophet (sallallaahu ‘alayhi wa sallam) said, “No one will enter Paradise who has an atom’s weight of pride in his heart.” A man said, “What if a man likes his clothes to look good and his shoes to look good?” He said, “Allaah is beautiful and loves beauty. Pride means denying the truth and looking down on people.” (Muslim)

O Children of Adam, wear your beautiful adornment when you go to the mosque

Those who, when they spend, are neither extravagant nor stingy, but maintain a medium way.

My understanding from the Sunnah is that having nice clothing is allowed (and perhaps in some cases encouraged) assuming that it does not reach the level of extravagance. However, I also understand from the salaf that many preferred simple clothing out of humbleness. We have examples of some of the pious predecessors who owned only 1 or 2 garments, and we have examples of some Imams (like Abu Hanifah) who were very fashionable (reference).

It is very easy to take a sampling of Muslim men and how they dress, especially when they come to the masjid. At Juma time you see everyone in their work clothes. Many are in their prim and proper slacks with dress shirts. Or if your masjid is near an IT building, the ever popular Dockers/Polo shirt is a never miss. Come Maghrib or Isha time though, the tide turns. You start seeing people in strange combinations of clothing. Adidas sweatpants with a Brooks Brothers button down oxford. Raggedy T-shirts that expose their undergarments when they make sujood. Thobes with mismatching pajama bottoms (this is especially popular at Fajr time). The ever popular Arab Men’s abaya thing worn on top of Western clothes for the Khateeb on the go. And don’t forget, the outfit every sister dreams of seeing her knight in shining armor wearing: the shalwar top with jeans on the bottom.

We need to start giving proper respect to the masjid when we attend. I’m not saying you need to get a suit and tie for Asr prayer, but at least make sure your clothes are clean, matching, and would not embarass you if you had to walk into Walgreen’s in that outfit.

It wouldn’t hurt us to get some nice clothes for going to the masjid, or even for going to work. People do notice these things. It doesn’t mean you have to go to Banana Republic and buy a $90 shirt (not when you can get it on sale for $20), but do take a bit of pride in how you look and know that people are going to judge you based on your appearance one way or another, so you may as well make it a good one.

Another thing that bothers me is the etiquette of rolling your pants/jeans. At the masjid you will see the guy in his dress shirt and sweat pants rolling up the pants during prayer up half the leg on one leg, and haphazardly rolling it up 1/4 of the other leg. Would you ever go out in public looking like that? Take care of rolling your clothes properly so they look nice. I for one, when I am trying on pants at the store, will roll them up to see how they look. You can make yourself look very “stylin and profilin” while following the Sunnah if you put in a little bit of effort.

Some clothes, like dress slacks, are not made to be rolled. In this case, try to plan ahead and tailor your clothes accordingly. I bought a suit once where the tailor wanted to strangle me because he kept telling me I would look ridiculous with the pants as high as I wanted them, but you gotta do what you gotta do.

Another part of the Sunnah is making sure your ‘awrah is covered. For this I actually recommend dressing a bit ‘hip-hop’ as their shirts are usually larger and will cover more of your derriere and other places. The jeans are also a bit baggier.

This might not work for the 9-5 professional though. If your office has a business casual dress code (as most do), then I would recommend wearing nice pants and shirts, but not tucking them in. This is fashionably acceptable these days, and you can still look very suave doing it (I know I do). If you’re at a slacks/belt/tie kind of place, then Allahu Alim, I don’t know of anything to say other than get your slacks a bit on the loose side :)

Make sure that you are properly trimmed up. Grow your beard, but take care of it the best you can. Your beard can be more than fist length and still properly maintained. At the same time, it can be less but look extremely unkemptly. Also make sure to cover the parts of the fitrah outlined in the Sunnah, most specifically clipping your nails. If you yourself are disgusted by the sight of your own feet, maybe you should wear socks when you go out. These are really simple things but they make a big difference.

This is self explanatory. Make sure you’re not so stank that brothers don’t know whether to give you an Altoids or a lota. I am a strong believer that every Masjid bathroom should have a can of air freshener and a can of Lysol. Let’s keep it clean, it’s half our faith.

If you smoke, get a breathmint until you can quit. There’s nothing like praying in a spot where a smoker just spent 8 sajdah’s breathing nicotine into the carpet, much less ‘shoulder to shoulder foot to foot’ for 23 rakats in Ramadan with a smoker. I’ve actually forfeited my spot in the front row and moved to the back to avoid such a situation.

Make sure you are wearing nice cologne or something when you go out. It is the Sunnah to smell nice. Regarding Attar oils and such, use this rule of thumb: If someone gave you this as a sample at a department store and you thought it smelled rank, then buying it out of the trunk of someone’s car bottled up in a cheap plastic vial, and rubbing it on the back of your hand, is not going to make it smell any better. I remember once at a convention someone rubbed some on my hand (unsolicited) and the first words that came to mind were “farm animal.” This should be a red flag not to rub it all over yourself. You will only be hurting your own marriage, or whatever marriage prospects you have left.

I’m not saying everyone needs to go out and get some Acqua di Gio, but just make sure it’s not something funky smelling. For colognes, I personally recommend Acqua di Gio, Armani Mania, Polo Black (and Double Black), Burberry Brit, Vera Wang, Dolce&Gabbana, and others..

This is by no means any kind of an exhaustive list. There’s a lot to be said and studied regarding this issue. There are plenty of hadith on the subject, as well as plenty of different examples from the salaf to be studied on the issue. This post does not do justice to any of those. What it does do, I hope, is at least make Muslim men a bit more conscientious about how we look. Allah(swt) is most deserving of our looking nice when we pray, when we go to the Masjid. We also have an image problem, especially in the West. Reforming that image is going to take a whole package of reform. This may seem like an extremely minor part of it, and it is, but it is also the first thing that will be noticed about you.

Some thoughts on the US Muslim Population