Well, for most of our American/Canadian friends, cricket usually refers to the annoying insects that keep you up at nights. But, for the rest of the world; well may be I should qualify before saying that: England in Europe, South Africa in Africa, Indian sub-continent in Asia, Australia, West Indies in this Americas. So, for these parts of the world, cricket is a huge game. In India/Pakistan, people worship cricketers, the following being stronger than probably the following by Americans of their MLB/NFL/NBA teams. Probably the fact that there are actually ‘loyalists’ who play for their countries versus mercenaries (no offense intended) in the local leagues here, has something to do with the following and why players are competing for more than money. In this regard, it is more similar to Olympics games than pro sports in America.

So, back to the topic, World Cup cricket started yesterday, kind of in America’s back-yard (well relatively speaking). West Indies, in the Caribbean islands, is hosting it. At one time the host country was the super-power of cricket, today it is a shadow of its former past. For those who care, I’ll be following it for you! A big whoopee for some and a big yawn for most others.

The teams to beat this time are South Africa and the perennial giant, Australia. Pakistan has always had the mercurial team, and while India has 1+ billion people (who worship the sport) to choose its cricket team from, and while it is always a contender, it just doesn’t have the bowling horsepower to get it over the top, in my humble opinion anyways. By the way, bowling is not your bowling in the alleys; it is more similar to pitching in baseball. The similarity is probably because baseball is likely a derivation of cricket (being that Britain influenced American history greatly). The other team that has won the World Cup before is Sri Lanka, and like Pakistan, Sri Lanka has its own history of upsetting the favorites. 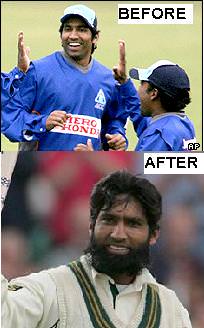 Now, there are some interesting ‘Muslim matters’ in cricket. You see Pakistan’s leading batsman (one of the premier batsmen in the world), formerly Yousuf Youhana, converted to Islam in 2005, changing his name to Mohammad Yousuf. The cricket media went into a frenzy, his mother was up in arms, and charges of Yousuf converting under pressure were all over the place. But, if you just look at this guy, and if you look at his enthusiasm for Islam and even his appearance (he sports a bigger beard than anyone else in the team), then you can conclude that when he converted, he felt and meant every bit of it! Now, I should add the disclaimer, that I don’t mean that the beard is the concluding factor for one’s religiosity, but I do mean that his enthusiasm is highlighted by the following of this Sunnah.

After his conversion, and I am not saying there is any direct relationship to this fact, Yousuf has been one of the most prolific batsmen in the world. Yousuf averaged 99.33 runs in 2006, and broke two of Sir Viv Richards’s 30-year old records. Other records he broke this year can be found in this link (if you care).

Another story that broke out not long ago was when Hashim Amla, South Africa’s devout Muslim player, was called out as a ‘terrorist’ by Dean Jones, a former cricket star for Australia, and a commentator for many cricket programs. Jones said, in what he thought was an off-line comment (love it when you catch unplanned bigotry on air): “”The terrorist has got another wicket”. Jones’s comments were condemned worldwide. In Jones’s defense, he apologized profusely and talked to Amla directly. Compare that with what some of the Congressmen can get away with in America (think Peter King), let alone the commentators, this is a pretty decent response.

I Believe That Hijabs and Soccer Can Coexist Peacefully