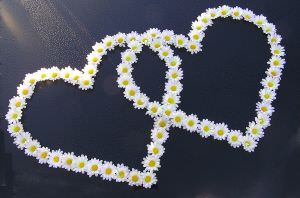 (Updated 4/2/07) Ok, time for a not-so-intellectual, yet extremely important topic. Probably more applicable in our daily lives than most other issues we blog about. So, I modified the title to the post on my previous blog to make it gender-neutral. For a good reason, as you’ll see.

In today’s life of hustle and bustle, the family unit is becoming fragile by the day. Divorces are on the rise (see this entry on Tariq’s blog), and Muslims can no longer claim, as justifiably as before, that divorce is rare among Muslims or even much less than incidents of divorce among non-Muslims. Below, I’ll list the nearly 90 ways that a speaker discussed (you can see video here) and readers added that talk about ways to keep your “Wife’s Love”. Since we have already addressed the husband’s tricks to keep his wife’s love alive for him, a couple of commentators suggested that I do the same for the reverse.

So, the challenge is on, can we come up with even 60 ways for the wife to keep her husband’s love? Challenge has been MET! With the help of the Blogosphere’s smartest readers, we have collectively gathered 60 ways to keep the Husband’s love, and many more for keeping the Wife’s. The question now is how many will we actually implement? And how do we implement? Would flash cards work? Would one thing a day work? Maybe write up one way on the refrigerator sticky? Do we need to start another list, maybe I-Muslim’s 60 ways to keep the mother-in-law happy :) ? I think we may need more than that…

———–
Here’s the other list… we couldn’t quite get to 100! But you are welcome to help add to this as well, I’ll keep editing the post if you have points to add to this side of the issue.

Ahmad Shehab – 60 Ways to Keep Your Wife’s Love – Guaranteed (thanks to Muslim Apple for transcribing)
1. Make her feel secure and sakinah – don’t threaten her with divorce
2. Give sincere salaams
3. Treat her gently – like a fragile vessel
4. Advise in private, at the best time, in the best way and atmosphere
5. Be generous with her
6. Warm the seat for her, you will warm her heart
7. Avoid anger, keep wudu at all times
8. Look good and smell great for your wife
9. Don’t be rigid or harsh-hearted or you will be broken
10. Be a good listener
11. Yes for flattery, No for arguing
12. Call your wife with the best names, cute nicknames, names she loves to hear
13. A pleasant surprise
14. Preserve and guard the tongue
15. Expect, accept, and overlook her shortcomings
16. Give sincere compliments
17. Encourage her to keep good relations with her family
18. Speak of the topic of her interest
19. Express to her relatives, how wonderful she is
20. Give each other gifts
21. Get rid of routine, surprise her
22. Have a good opinion of each other
23. Have good manners, overlook small things, don’t nitpick
24. Add a drop of patience, increase during pregnancy, menses
25. Expect and respect her jealously
26. Be humble
27. Sacrifice your happiness for hers
28. Help at home, with housework
29. Help her love your relatives, but don’t try to force her
30. Let her know that she is the ideal wife for you
31. Remember your wife in dua
32. Leave the past for Allah subhanahu wa ta ala, don’t dwell on, dig into, or bring it up.
33. Don’t act as if you are doing her a favor by working or providing, Allah is the Provider, the husband is the carrier of the sustenance to the family
34. Take shaytaan as your enemy, not your wife
35. Put food in your wife’s mouth
36. Treat your wife like she is the most precious pearl that you want to protect
37. Show her your smile
38. Don’t ignore the small things, deal with them before they become big
39. Avoid being harsh-hearted
40. Respect and show that you appreciate her thinking
41. Help her to find and build her inner strengths and skills
42. Respect that she might not be in mood for intimacy, stay within halal boundaries
43. Help her take care of the children
44. Give her gifts with your tongue, be an artist with your compliments
45. Sit down and eat meals together
46. Let her know that you will be traveling or returning from travel, give her sufficient notice
47. Don’t leave home in anger
48. Maintain the secrecy and privacy of the home
49. Encourage each other in ibaadat
50. Respect and Fulfill her rights upon you
51. Live with her in kindness, goodness, fairness in good and bad times
52. Kiss your wife, foreplay, “Don’t jump on her like a bull”
53. Keep disputes between the two of you, don’t take it outside
54. Show care for her health and well-being
55. Remember you are not always right or perfect yourself
56. Share your happiness and sadness with her
57. Have mercy for her weaknesses
58. Be a firm support for her to lean on
59. Accept her as is, she is a package deal
60. Have a good intention for her

61. During Ramadhan, 6 days of Shawwal, Mondays & Thursdays etc. wake up well before fajr and prepare a special wholesome suhoor for her
62. Feed her the suhoor you made for her :)
63. Designate a nice, clean, spacious area in your home for the 2 of you to pray at night whenever you can. Keep it smelling nice and fresh with incense etc.
64. Women love flowers. Make her something special, a decorative jewelry case or even a poem. Then get a bunch of rose petals and make a trail of them on the floor – leading to the gift you made for her.
65. Make a short song about how she looks as radiant as the moon and mention what a beautiful and special creature she is. Sing it to her acapella. The more horrible your voice is, the better :)
66. Teach the wife the famous long hadith of A’ishah RH about Umm Zarr.
67. Give her a nice massage when she least expects it.
68. Send your wife a text message out of the blue with a message of love
69. Send your wife an email without a reason
70. Go out on a date (yes dates WITH YOUR WIFE are HALAL after marriage!) monthly or set up some schedule and follow it religiously, WITHOUT the kids.
71. Plan a get-away for a weekend in a nice location, preferably without kids (may be stuck with infants).
72. Do something for your wife’s family, whether it is a gift, or a chat with her teen brother who needs mentoring, or whatever. It will get you LOTS of brownie points.
73. If the husband needs to give her advice of something delicate, tell her with wisdom, good timing and when she is in good health without the woes of menses.
74. Do not keep reminding and demanding your rights all the time. Ibn Abbas reported to having said: “I fear Allah from demanding my rights from my wife for I worry that I will not be able to fulfill mine of hers”
75. Open the door for her and help carry her humongous ‘Coach’ or Target bags.
76. Shop groceries for her and call her from the store and ask her what she needs for the home, for herself or for her to give to people as gifts.
77. Ask her if she would like to invite her sister-friends over for ladies get together dinner and cook for them too!!!
78. Continue with her practice of giving gifts to her parents and siblings. Ask her what she thinks they might be in need of. Only if one can afford it.
79. Help her parents pay off debt or if they are ill. Send her poor relatives some money every year in Ramadhan and also for them to sacrifice for Udhiah during Eid ul Adha. Or even offer to send them to make Hajj if one can afford it.
80. Write love notes or poems and place them in the book she’s been reading for her to find. Also place them in her jacket pocket or drawer.
81. If the wife tell the husband something that she had just learned from the Qur’an or hadith book, do not dismiss her or ridicule her effort, instead listen to her and take her word.
82. Hey, why not take her for Hajj or Umrah if this have not been performed yet, better than Coach bags.
83. Plant her, a rose garden!!! Or better plant her, a kitchen garden with all kind of herbs she needs for cooking.
84. Adopt a kitten for her if she likes animal (only if one knows how to care for cats)
85. Get her a new car to replace her old problematic banger; or take her car for maintenance and wash it too.
86. Upgrade her pc or lap-top to a new version with bigger memory; or upgrade her cell phone to the one with itunes and download her favorite Surah recitors.
87. Learn to do special massage technique and surprise her with your new expertise. (This one was mentioned during the TDC lecture for sisters only program)
88. Teach your children some relevant Islamic etiquettes pertaining to respecting and honoring their mother.
89. Be humorous with her when she made a mistake in the kitchen, like putting too much salt or burnt her baking. And never ever threaten her that you’ll take a second wife.

Thoughts and Advice on Interracial Marriages

Angelic Curse and Intellect Over Revelation