In Aug 2011, Associated Press journalists Chris Hawley, Adam Goldman, Eileen Sullivan and Matt Apuzzo began publishing a series of detailed reports exposing a decades long secret surveillance program. This program was engineered by the NYPD (with assistance from the CIA) to gather intelligence on entire Muslim communities. Operating under the auspices of the “Demographic Unit”, law enforcement spied on American Muslim citizens all along the Northeastern seaboard— from New Haven, CT to Philadelphia, PA. The extent and reach of this suspicion-less spying extended far beyond the boundaries of New York City; with local officials and police departments seemingly unaware that the NYPD was conducting such far-reaching clandestine activity outside of its jurisdiction.

This series of Associated Reports revealed the surreal and sordid details of a program that read more like a Hollywood Spy/Crime drama- filled with informants, undercover police officers (“rakers and mosque crawlers”), monitoring of masjids, bookstores, homes, cafés, halal meat markets, and other businesses. Muslim Students’ Associations were also targeted for surveillance –including Yale MSA, City College of New York, Rutgers New Brunswick and UPenn MSA. NYPD informants infiltrated MSA student meetings, chat rooms, online forums and group outings. Based on information obtained by the Associated Press “Student groups were of particular interest to the NYPD because they attract young Muslim men, a demographic that terrorist groups frequently draw from. Police worried about which Muslim scholars were influencing these students and feared that extracurricular activities such as paintball outings could be used as terrorist training.”

To read clear, irrefutable evidence that law enforcement was engaging in such despicable activities is mind-boggling and absolutely frightening. The legal, political and economic ramifications of these covert operations may seem clear. However, there has been insufficient attention paid to the emotional and psychological toll this program had, and continues to have on the psyche of American Muslims – both those who were targeted and those who (as far as they know) were not being monitored. Imagine finding out that, for not reason other than your faith, you were being watched, the details of your daily life being recorded in a file? Imagine going to Jummah prayer and the person sitting next to you is secretly taking notes on everyone in the musallah? Jotting down names of those who seem particularly ‘devout’? Those who may be ‘susceptible to extremist ideology’? Imagine attending a Ramadan iftar at a neighbors house and this gathering viewed with suspicion?

These revelations induced feelings of anxiety, trauma, stark vulnerability and powerlessness. A 2014 research study entitled “Under Surveillance and Overwrought: American Muslims ‘ Emotional and Behavioral Responses to Government Surveillance” found that heightened levels of psychological distress, anxiety and avoidance of discussions that may increase the likelihood of future surveillance were prominent.

Now imagine being 20 year old college student, president of the MSA at the University of Pennsylvania, whose “aim and focus was to put on meaningful and fun events for my friends and peers. Our biggest concerns were getting summer internships”. Imagine now being told that your student group, your friends, those you cared for, were being targeted by the NYPD due to “possible terrorist activity”? This was the reality for Mohammed ‘Mak’ Hussain – thrust into this controversy and wholly unprepared to deal with the injustice of religious profiling. Mak shares his intimate personal reflections and emotions experienced during that time.

“Three years later, remembering the events of that week elicit feelings of confusion, frustration, and powerlessness that I haven’t felt since then. Old scabs are being pulled back to reveal wounds that were only partially healed.

As the president of the student group targeted for surveillance by the NYPD, I felt responsible for the well-being of its members. As a 20-year-old trying to lead a club, I found myself in a position where I felt I needed to safeguard hundreds of my peers from the very people who were meant to protect us. I had advisers and mentors, but at the end of the day, there was no one else who could take the responsibility from me for the safety of my organization’s members. Or rather, there was no one who would.

It’s one thing to be aware that you are probably being watched for your skin color, name, or religion. It’s another to have to confront that reality, and ask the associated questions: Why are they doing this? What did we do? What else will they do? Questions that seemed irrational from a distance suddenly became all-encompassing and impossible to dismiss. Students who were previously not involved in the MSA came forth to express their concerns and fears. And for a college student, that was a lot of pressure, leaving me feeling isolated and helpless. I didn’t know what I was doing, and I felt alone and overwhelmed in my responsibility to the community.

When faced with the threat of a government abusing its power, how could I trust any other authority to act without ulterior motives? Could a university support its students unconditionally? Could allied organizations care about us as individuals, and not just another opportunity to make a statement? People cared about our rights, but not about the kids pushed into making public statements because they felt they had to, even when they seemingly fell on deaf ears. There was little concern for college students who appeared on hostile talk radio shows because they felt they needed to represent the community, whatever the forum; those who had to negotiate with administrators for support that they assumed was the right given to any student; those who had to protest in the middle of campus, not driven by the spirit of an activist or a desire for justice, but because the feelings of frustration and helplessness were too much to take sitting down. Those who wept openly during Friday prayers because they hadn’t taken a breath for a week and weren’t prepared to shoulder the responsibility of the safety of a community.

The NYPD’s surveillance damaged my sense of security. My sense of trust in those I thought I were supposed to be able to trust. The resulting cynicism and escapism lasted the rest of the semester and into the summer. I’m ever grateful to those who got me through it with their concern and small kindnesses, from mentors to peers…but in the end, myself, and I feel the community, were exhausted. 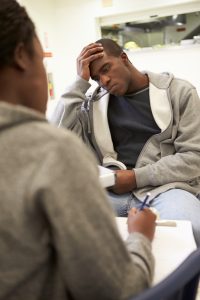 Taking Care of Our Communities

Mak’s experience underscores the need for us as a community to address the short and long term mental and psychological impact and toll of Islamophobia, violence, racism, xenophobia, fear-mongering, racial and religious profiling. As a community, we rush to enter into an odd pageant of punditry, critique and analysis of “Good Muslims” vs.“Bad Muslims”. We appear to have become very adept at issuing apologies and condemnations, offering khutbahs explaining the “true essence” of Islam, denouncing murderers and renewing calls to engage in ‘counter-terrorist’ dawah (disseminating information about Islam designed to neutralize the spread of extremist ideology).

However, it is critically and equally as important that we learn to engage in radical self-care and self-compassion. Imagine how young people like Mak Hussain feel – ‘undersurveillance and overwrought’. For the majority of their lives, Islam and Muslims have been characterized more often than not as a religion of blood-thirsty callous killers. Imagine the psychological wear and tear on a soul and spirit. As the Muslim Chaplain at the University of Pennsylvania, I will be facilitating a series of conversations (‘Healing Halaqas’) designed to offer safe space for young people to process the anxiety and trauma experienced by recent local and national headlines and controversies – from #CharlieHebdo to Boko Haram’s brutal slaughtering of over 2,000* Nigerians. It is important that we stay connected with one another, strengthen our community, remain resilient and discuss healthy ways to cope in the midst of troubling public events and dialogue. I urge community members to have these discussions openly and honestly. We must take care of one another emotionally because the ongoing dialogue related to religion, extremism, and terrorism assaults ALL our spirits.

Kameelah Mu’Min Rashad is the Interfaith Fellow and Muslim Chaplain at the University of Pennsylvania. She is also the founder of Muslim Wellness Foundation and lead organizer Muslims Make It Plain, a coalition of concerned Muslims working to inspire, empower and support grassroots mobilization and direct action to address police brutality, racial and religious profiling, unlawful surveillance and the over policing of America’s Black and Brown communities. Kameelah graduated from the University of Pennsylvania with a BA in Psychology and M.Ed in Psychological Services and is currently pursuing her doctorate in Clinical Psychology at Chestnut Hill College in Philadelphia.

Mak Hussain graduated from the University of Pennsylvania in 2013, with a degree in biochemistry. He now lives in San Francisco, working in data analytics. He’s passionate about nature, education, and increasing accessibility of high-quality locally-raised, organic halal meat

*numbers are unverified due to lack of information from region