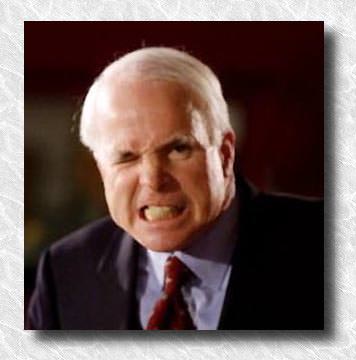 Interviewer: Mr. McCain, what is the gravest long-term threat facing our economy?

Well this wasn’t the precise quote… but it sums it quite well. To quote then in the spirit of completeness:

“the absolute gravest threat is the struggle that we’re in against radical Islamic extremism, which can affect, if they prevail, our very existence. Another successful attack on the United States of America could have devastating consequences.” [Read about this and more at “Perils of Honesty in Politics”-LA Times]

We already know that McCain and team are secretly hoping for another terrorist attack occur in USA. If we needed a reminder, then it happened in the Freudian slip by McCain’s senior adviser, Charlie Black, who after agreeing that Benazir’s assassination probably helped McCain capture the Republican candidacy (proud moment for Pakistan; Pakistanis can actually affect US politics, boohoo… payback?):

As would, Black concedes with startling candor after we raise the issue, another terrorist attack on U.S. soil. “Certainly it would be a big advantage to him,” [Fortune]