The players fell to their knees. The fans jeered. The press and everyone else laughed. The mighty Barcelona Football club had just been totally and utterly humiliated by Paris St Germain 4-0 in the first leg of their Champions League knockout match.

The defeat in the first leg (or play-off for our North American readers) was all the more excruciating because Barcelona were used to dishing out beatings like this on other teams, never actually getting a taste of their own medicine. This was a club that had a proud history of winning championships and winning them in style. This was a team of World Cup winners like Iniesta and superstars like Messi and Neymar Jr. All these players were obviously past their prime. 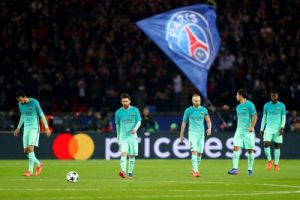 It seems someone forgot to send the Barcelona team the memo.

Instead, Barcelona trained hard and talked about their “strategy” for defeating Paris St. Germain in the next match. They would score 5 goals to win the next match and go into the next round. 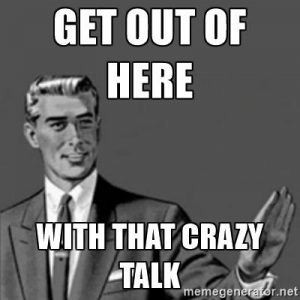 Journalists rolled their eyes. In the history of the Champions league, no one had ever reversed a 4-0 deficit. For our North American readers, it would be like being down 25 points midway through the 3rd quarter of the Super Bowl and talking about how you were going to win.

But Barcelona were not being crazy. They were being deadly serious. They were planning, preparing and training not just to make the final score a little more honourable in defeat. A 4-2 or 5-3 loss would not be so bad, but they had no intention of being heroic failures. They were in it to win it.

The match started and it started happening. Goal! Barcelona was ahead. A few minutes later another goal scored by Barcelona. People were getting interested. Then Barcelona scored a 3rd goal. 4-3. Wow, they were serious. People couldn’t believe it. They started calling their friends. “Are you watching this???” Social media started lighting up like firecrackers on Chinese New Years. #Barca started trending worldwide. 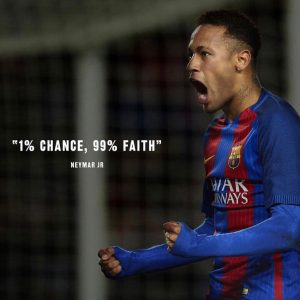 Then it all fell apart.

Just as hope was rising up and people were starting to think that the impossible was possible, Paris St Germain scored an away goal. The dream was over. It was time to wake up. Everyone slumped like Floyd Mayweather just punched them in the gut. 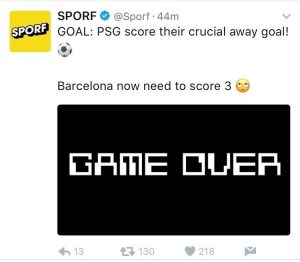 Everyone except the 11 men on the pitch wearing the Barcelona shirt.

They picked themselves up and just kept going as if nothing happened. In fact, Barcelona had planned for this. When Luis Enrique (their coach) said that their deceptively simple strategy for the match was to score 5 goals, an incredulous reporter asked what Barcelona would do if Paris scored too. 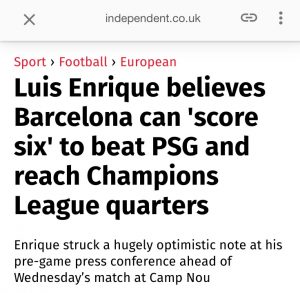 And with 10 minutes to go, that is exactly what they did. Barcelona had gone from 4-0 down to 5-3 down to somehow score 3 goals in 10 minutes including the winner in the very last few seconds. They had achieved the impossible.

It is easy to see what this has to do with Tom Brady and his New England Patriots. Their heroics in the last Super Bowl were just awe-inspiring even to people like me who don’t get American football. 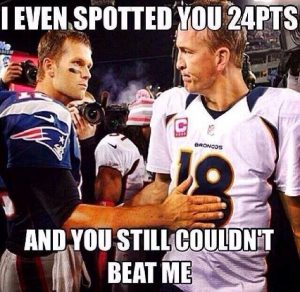 But what has this got to do with the future of the Muslims?

Worst of all, we find ourselves without hope.

And like Barcelona or the Patriots, we find ourselves with a choice. 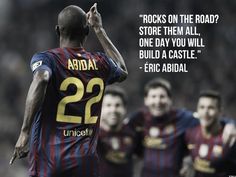 Are we going to give up, walk away, complain and make excuses? Or are we going to pick ourselves up, work harder than we have ever done before and come together as a team? 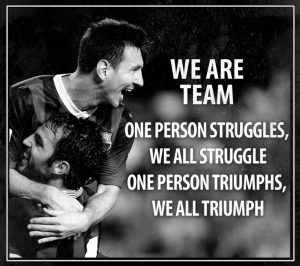 Most importantly, are we going to believe in our hearts that we will rise again from our current depths while remaining true to our faith?

This isn’t just about having hope or being positive. It is about changing the narrative from fear, persecution and hopelessness to one of success.

The fate of the world depends on what we do next.