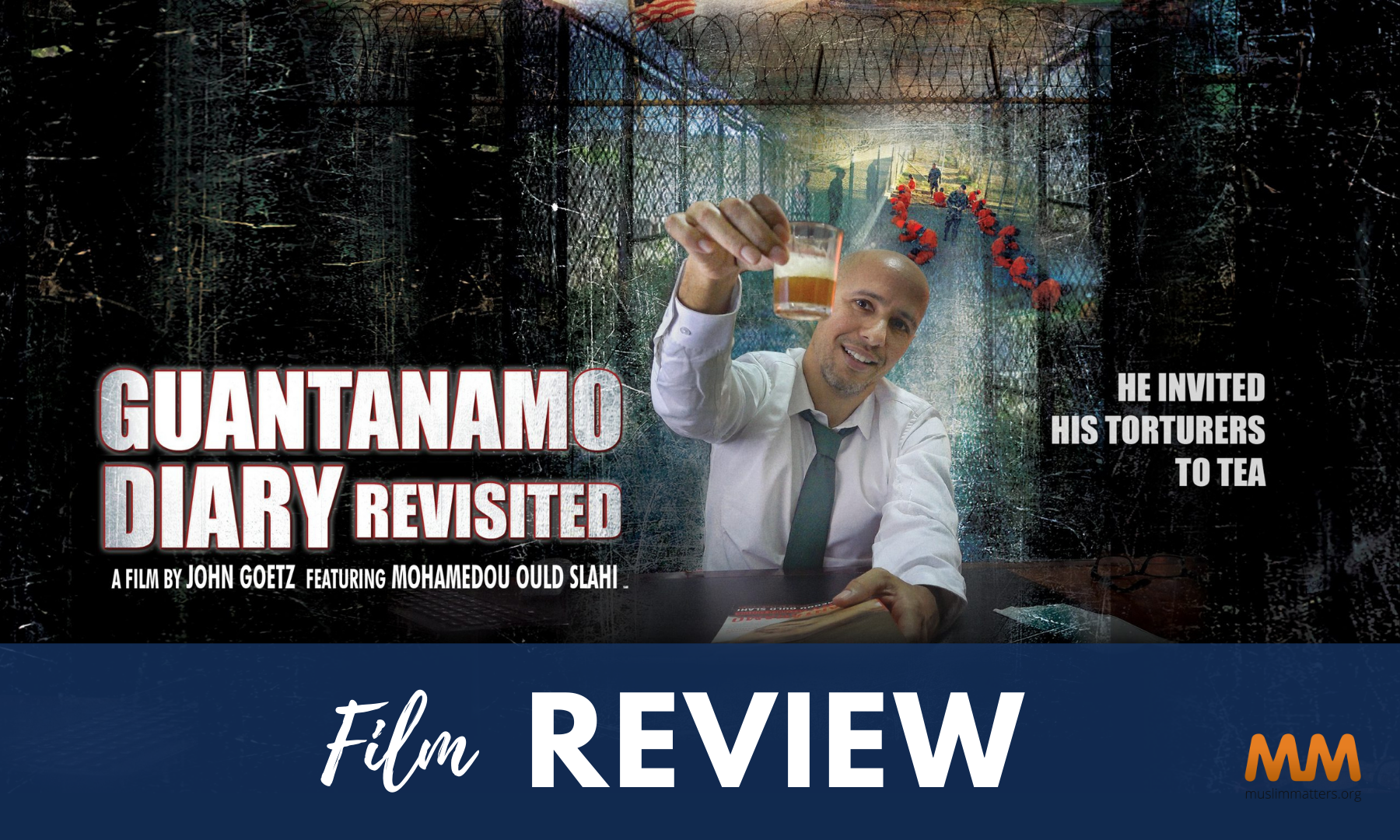 Four minutes into the documentary film Guantanamo Diary Revisited, the movie’s subject, Mohamedou Ould Slahi, looks into a camera and addresses the men and women responsible for the torture he endured during his 14-year confinement at Guantanamo Bay detention center. He says he forgives them and goes on about inviting them to tea. He stops abruptly and shakes his head.

“Too long, too preachy,” he says of his first take. The second is a softer, kinder version. He says there was only a tiny minority who mistreated him during his imprisonment, which lasted from 2002 to 2016. This time when he invites them to share tea, he raises a glass.

That scene heralds the documentary’s theme – directed by John Goetz and set to be released on Vimeo and on DVD on March 29. It’s sort of a follow-up to Slahi’s book, Guantanamo Diary, which details the torture, cruelty, and injustice he experienced at the hands of his captors there.

The baseline premise is that Slahi wishes to show forgiveness to some of his former captors. At first, it feels hokey and a little too earnest, but taking the high road, digging deep, and choosing compassion evolves into a portrait of people who were all scarred by their experience at Guantanamo, no matter what their role was there. And Slahi eventually reveals his motive for forgiving.

Among the military staff working at Guantanamo during Slahi’s confinement, is an intelligence analyst referred to as Sydney (the film abounds with aliases, most pointless because of how easy it would be to identify any of the people in the film). “When an opportunity came to go to Gitmo, I jumped on it,” she says. She says she was an analyst – a brilliant one, according to her. “I miss intel a lot.”

She describes Slahi as a very charismatic, smooth-talking monster who is an enemy of the United States.

She asserts that he recruited three of the four 9/11 conspirators to Al Qaeda.

Slahi freely states that he went  to Afghanistan in the 90s to join the mujahideen (at the time backed by the U.S. government) in their fight against the Soviet-backed Afghan government. He acknowledges that he was affiliated with Al Qaeda during that time. However, he denies fighting militarily.

“I never killed anyone,” he says. “I never participated in action in Afghanistan.”

That leaves open the question: if he didn’t go there for “action,” why did he go? In his voice-over narration, Goetz leaves it open to interpretation.

“He signed up with Al Qaeda,” he says. “Does that make him a terrorist?”

Most Americans would scream yes.

Watching her body language as she speaks about Slahi “getting away with” her accusations, you know that she’s furious – and heartbroken. She gave so much of her life to the cause of preventing another terrorist attack that she was fractured by the loss. She left the agency.

When she talks to Slahi by iPad she is smiling and laughing, but the conversation descends into something that ruins his good cheer. She becomes more emboldened to say what she thinks. It feels like the conversation is about to spiral out of control. Her animosity is becoming more and more evident, and his well-rehearsed statement of forgiveness is not going to work under this barrage of emotion.

Finally he says “My dog has to take a piss,” and walks away.

“He ended the interview on purpose,” she says.

According to Goetz, it was a source of satisfaction to Slahi that he was the one who ended the conversation in Guantanamo Diary Revisited, that he was in charge.

“After he hung up the phone and wouldn’t continue to talk to Sydney, we got into a taxi afterwards and he was just giggling like I had never heard giggling,” says Goetz.

The fact that he is alive and well, enjoying the public spotlight, publishing books, while she dedicated her life to fighting him and the ideology she associates with him, seems to have wounded her spirit.

Slahi re-wrote his story and she had to end hers.

After September 11, she and thousands like her saw it as a sacred duty to win the Global War on Terror on behalf of the U.S.  Slahi’s success was like a battlefield surrender. To make it worse, she feels that the U.S. had surrendered to a psychological demon.

“He’s a narcissistic, manipulative individual,” she says of Slahi. “And they fell for it,” she says of those who believe Slahi guilty of no crime except knowing some people, some of whom know people – which is not a crime, even though Sydney insists she “put together the dots” in a way multiple government agencies did not when they found no evidence that Slahi had committed a crime.

Eventually, Sydney retired from the military.

So much – but not enough to keep Slahi from moving forward, living his life. 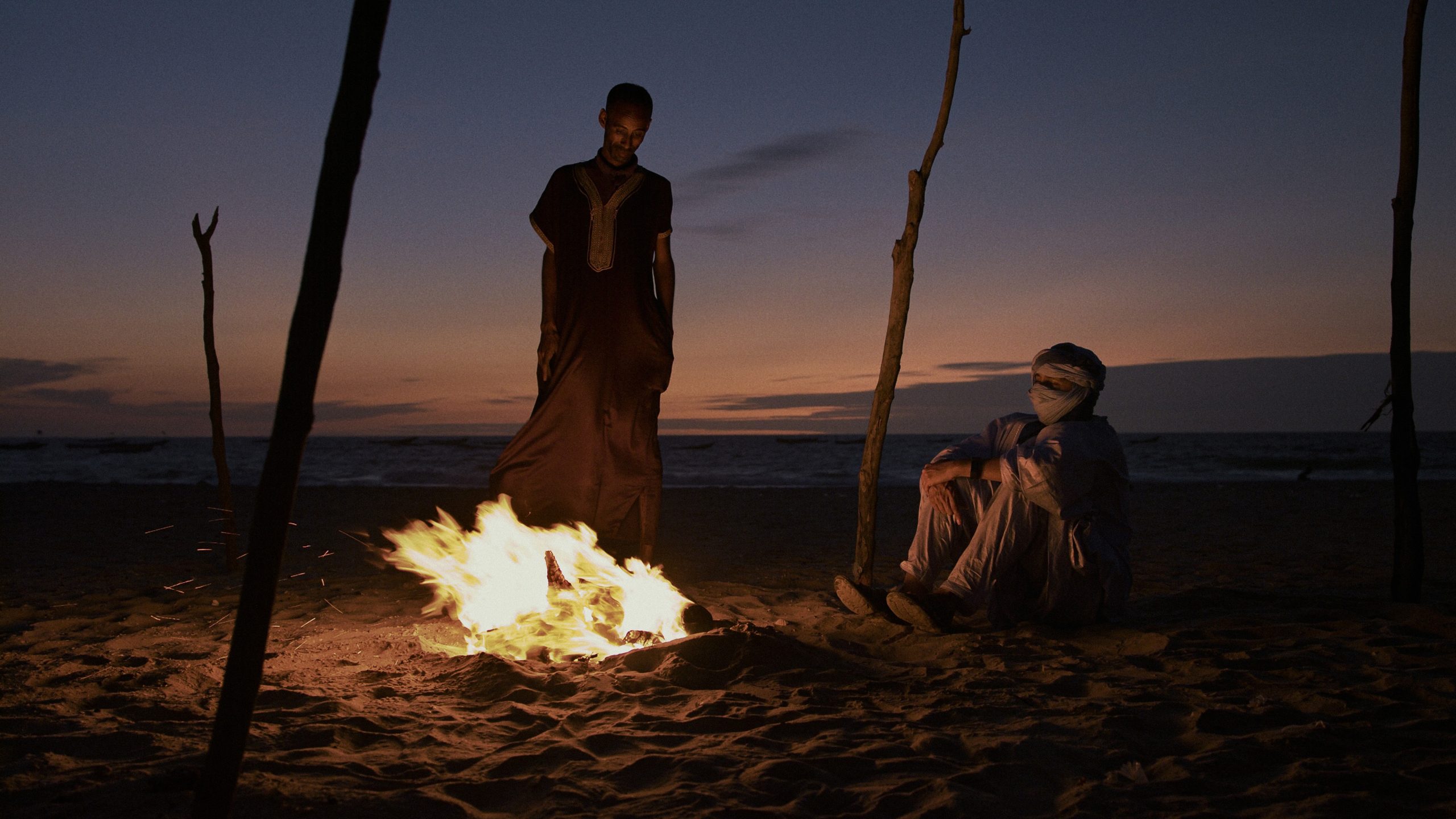 It was not the same for a guard nicknamed Master Jedi, who describes his impression on first meeting Slahi as a “skinny little tan man.”

“I’ve been a strong Christian for years now and for me to know that weighs on my shoulders; let me reach out to him and extend my apologies to him.”

A little later in the film we see Master Jedi showing Goetz the 15 medications he takes regularly, which include mood stabilizers and anti-depressants. Once again the narrative is destroyed by the reality. The “magnanimous forgiveness” melts away into the miasma of PTSD.

Goetz sets up a FaceTime call for Slahi and Master Jedi.

“I like that haircut,” Master Jedi laughs back, pointing at Slahi’s bald head. Then he gets serious.

“We’ve been talking in church about if you’ve ever hurt anybody you want to seek forgiveness, and I really wanted to ask forgiveness,” he says.

Perhaps the most compelling character in the film is known only by his alias, Mr. X, who tells Goetz that Slahi was “Terrified – he was absolutely terrified.” Mr. X goes on.

“I guess I’ve been doing this a lot,” he says. “I’ve done this in Iraq, I’ve done this in Afghanistan multiple times, and he’s probably the person I would say that I ever saw the most terrified in my entire career – that moment when or those moments when we did the rendition.”

When Goetz shows Slahi a photo of Mr. X dressed in a Viking-style get-up and tells him that this was Mr. X, Slahi smiles. He seems transfixed by the photo, then after a minute says, “He broke my ribs. He almost killed me.”

He goes on to describe the mental and physical torture Mr. X inflicted on him, including blasting strobe lights and blaring music for hours.

Slahi says Mr. X blasted the national anthem all night, so often that Slahi memorized it. But when he sings the words “Oh say you can see” he gets the melody wrong.

Mr. X was a torturer, and he tortured Slahi. He describes it in the language the military uses.

“So, did you torture?” asks Goetz.

Mr. X stares ahead as he drives, pursing his lips a couple of times as though about to say something, then changing his mind. Finally he answers.

So how does a human – any human, guilty or not – respond to torture? Slahi has a special take on this, one that emphasizes his reclaiming independence and dignity.

“I really want revenge,” says Slahi. “When I know that justice was not coming anytime soon…then what remains is revenge – but revenge is very tricky. Do I want to kill him? Do I want to apply the same pain on him?

“But I found this is ridiculous, so the best revenge was to forgive. It gives me back control. Then I said wow, this is good. I don’t need him to approve my forgiveness. I don’t need a lawyer for it. I don’t need anything; it’s completely my own decision. So forgiveness is an act of revenge – absolutely the best.”

Although Guantanamo Diary Revisited starts with a noble expression of forgiveness, but that is a fairy tale. Everyone involved was traumatized, but some were responsible for their own trauma. The blood on their hands is mingled with their own.

Acknowledging their struggles does not exonerate those who caused pain and terror, who violated the Constitution to torture Guantanamo prisoners. The people Goetz found, who were willing to talk on camera, did so because there was some chink in their armor, some moment of compassion or rage or both, that motivated them to talk. Whether they sought absolution or offered an apology or still seethed at the fact that he is free, they all talked – to Goetz, to Slahi, and to us.

Get Your Phone Ramadan Ready!