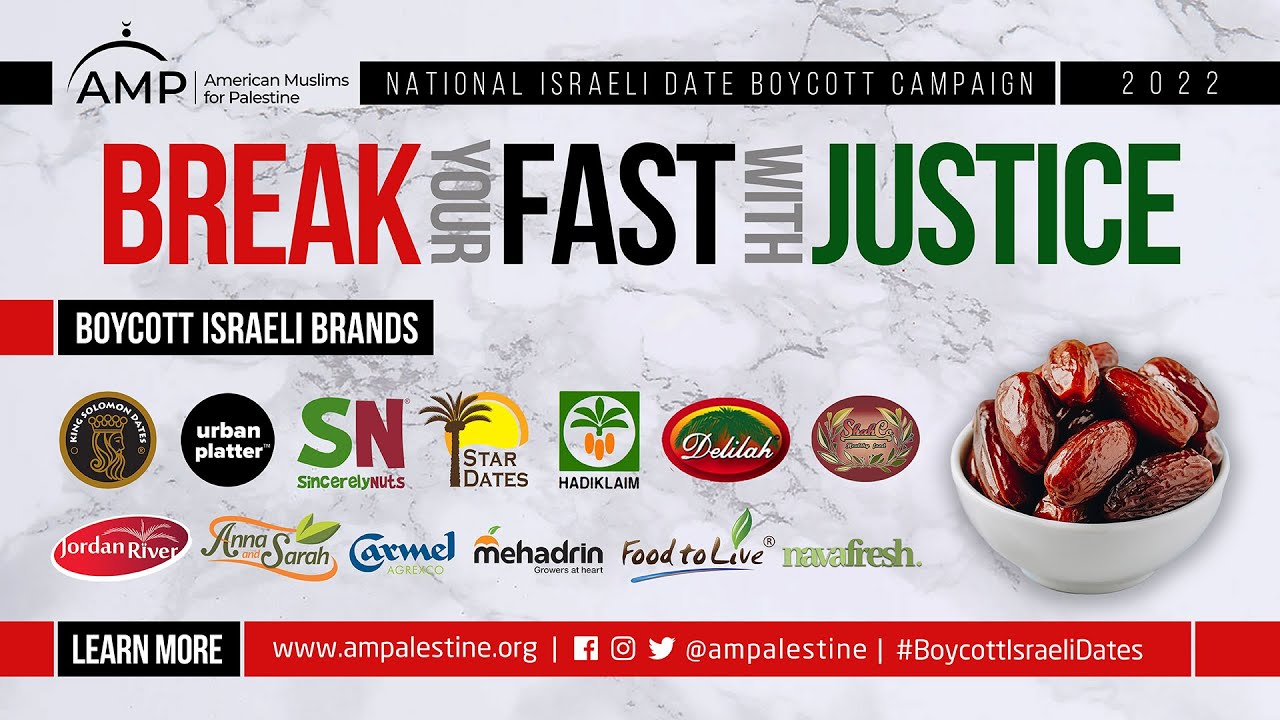 At this time of year, Muslim-Americans become the primary consumers of one of the most profitable produce industries–the date industry. It’s the nutritious fruit that if eaten in the morning, can bring blessings. It’s what we use to break our Ramadan fasts. It’s the fruit-equivalent of gold, and in fact, it’s widely known as Palestine’s “black gold.”  It’s so profitable that it’s a 160 million dollar industry in the US.

Why? The answer is Ramadan. There is no time more profitable for date growers and distributors than this holy month and it is profitable because of Muslim-Americans.

In this time period, tens of millions of pounds of dates are consumed in homes and mosques across the US, making American Muslims among the largest consumers of dates nationwide.

For more than a decade, dates grown on illegal and illegitimate zionist colonies in the West Bank were being sold in the US without opposition or protest. In fact, many Muslim-owned businesses stocked and sold these dates to their Muslim customers. Since 2012, American Muslims for Palestine (AMP) has led a national campaign to rid our markets of these dates. We’ve identified nearly a dozen brands and companies that sell Apartheid dates. Hadiklaim, one of apartheid Israel’s largest fruit exporters, markets three known brands in the US: Delilah, King Soloman, and Jordan River. Another produce exporter, Agrifood Marketing, sells dates under the Star Dates brand. To find additional brands, we looked at the most popular U.S. online retailers including Amazon and Walmart, and found these additional brands that source from Israel: Anna and Sarah, Food to Live (by Lexunder Inc), ShahCo, and Sincerely Nuts. We also found two Indian companies that ship to the U.S. and are highly visible in online shopping from the U.S.: Nava Fresh and Urban Platter.

Keep in mind that of the vast majority of dates grown in Apartheid Israel, nearly 60%, are grown on illegal colonies/settlements. Also keep in mind that dates grown on settlements are labeled grown in the West Bank, Jordan Valley, or simply, Israel. With that in mind, it is nearly impossible to distinguish between “settlement” dates and dates grown on land inside the so-called green line. Therefore, we urge you to boycott all Israeli dates.

To add insult to injury, date growers on illegal settlements often use exploited Palestinian labor and force them to work in horrifying unsafe conditions. Many a Palestinian laborer died or was severely injured due to heat stroke or falling from atop a date palm while harvesting. Additionally, while Palestinian farmers are denied permits to build deep water wells to tap into the West Bank’s water aquifer, illegal settlement farms are given an abundance of water. Settlement farmers enjoy an abundance of natural resources at the expense of Palestinian farmers who are forced to buy water from Israeli companies even though their lands can potentially supply them with the water needed to irrigate their crops.

The impact of the date boycott is being felt in Apartheid Israel. Whereas Israeli dates were 25% of all date imports to the US in 2015, they have now fallen to 16.9% in market year 2020/2021. This is also due to the fact that more dates are being imported from countries like Mexico, Pakistan, Tunisia and Algeria; however, many store owners across the US are rejecting apartheid dates sold by wholesalers – making Israeli dates or dates vaguely labeled as grown in the “West Bank” or “Jordan Valley” unwanted items.

Join American Muslims for Palestine this year and #BoycottIsraeliDates. Take action by learning more, signing the pledge, downloading the poster to post at your local store or masjid, and by staying up to date on dates!

Related: Where Are Your Ramadan Dates From?

Is PREVENT Compatible With Islam?

Taher Herzallah is the Associate Director of Outreach & Community Organizing for American Muslims for Palestine. In this capacity, Mr. Herzallah acts as a liaison between campus activism groups on campuses across the country. He helps these groups procure grants, materials and speakers and is also instrumental in helping students set up programs and activities. Mr. Herzallah also coordinates AMP's grassroots organizing and helps facilitate national coalition building . He is also working to develop AMP chapters across the country. Mr. Herzallah is one of the 'Irvine 11,' a group of students who were arrested and prosecuted for expressing their constitutionally protected rights of free speech and political dissent when they walked out of a speech given by Israeli Ambassador Michael Oren at UC Irvine in 2010. Mr. Herzallah was also one of six people arrested for protesting the appointment of David Friedman as US ambassador to Israel at a Senate Foreign Relations Committee hearing in February 2017. Mr. Herzallah has had articles published in various media outlets including the Orange County Register and Al Jazeera English. He has been featured on several media and radio interviews throughout the country and internationally. Mr. Herzallah studied Political Science and International Affairs at UC Riverside.