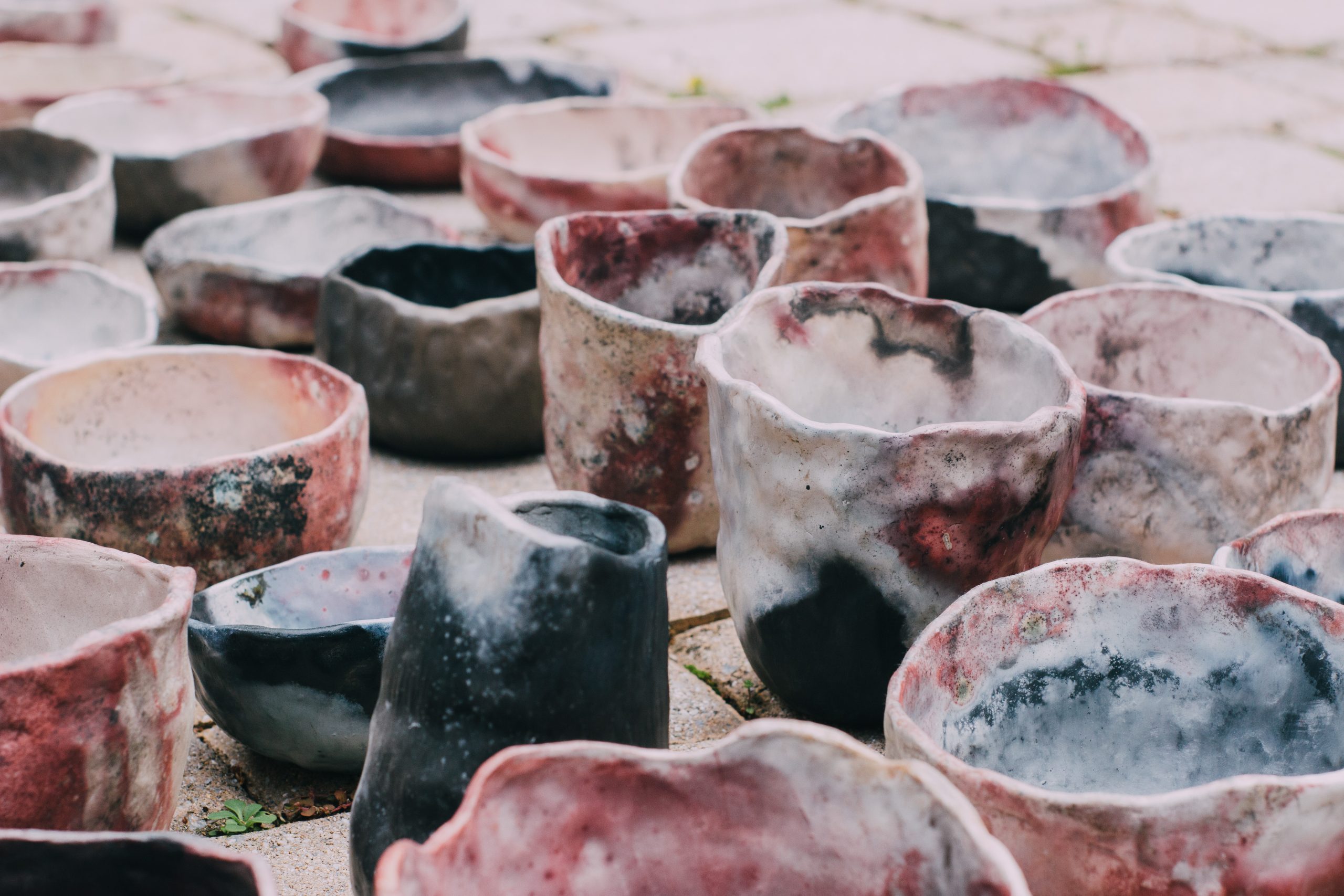 Several years ago, I worked for an interfaith organization in Baltimore County, where I was hired because I am Muslim and have extensive experience teaching and writing curricula on Muslims and Islamophobia. Despite having enthusiastically embraced my resume and vision, once in the job, they encouraged me and other Muslim colleagues to pander to the basest stereotypes about Muslims, including the accommodation of explicit anti-Black and anti-Palestinian discrimination by the Board and Executive Director, along with other forms of corruption and malfeasance. When the two Muslim staff requested mediation, we were retaliated against and eventually forced out of the organization.

Finding Solace in the Names of Allah

Pottery has long been a space of therapy, worship, and contemplation in my life. It makes sense then, after enduring a sustained experience of anti-Muslim bigotry, in the context of decades of dehumanization and violence against Muslims and other targeted communities, I turned to the clay to remember that which keeps me centered and reminds me of who I want to be regardless of the behavior of others. I also had to do some soul searching about how I landed in that job in the first place. 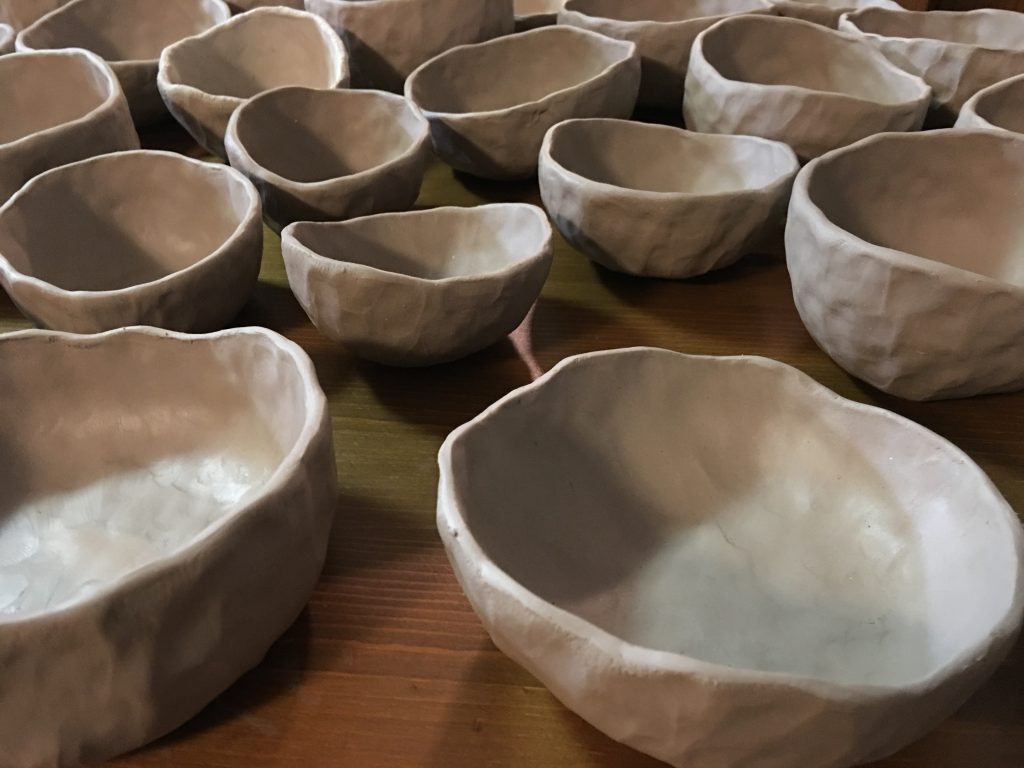 I sculpted 99 clay vessels to represent the 99 names of God in Islam, known as Asma Al-Husna (The Beautiful Names), a collection of aspirational characteristics that we contemplate and recite as worship. The 99 embody the Islamic principle of tawhid, or monotheism, the diversity of all encapsulated in the One. I chose the simplicity of the pinch pot as a primordial vessel which represents our bodies as vessels of the soul, that which is sacred and unique to each of us, a vessel inscribed with our own divine message and purpose. I also chose pinch pots because it was outside of my typical art practice as a wheel thrower, so I wanted to create vessels that pushed the boundaries of my own identity to signify my love of learning and my ability to grow out of the challenges that inspired the creation of this artwork. 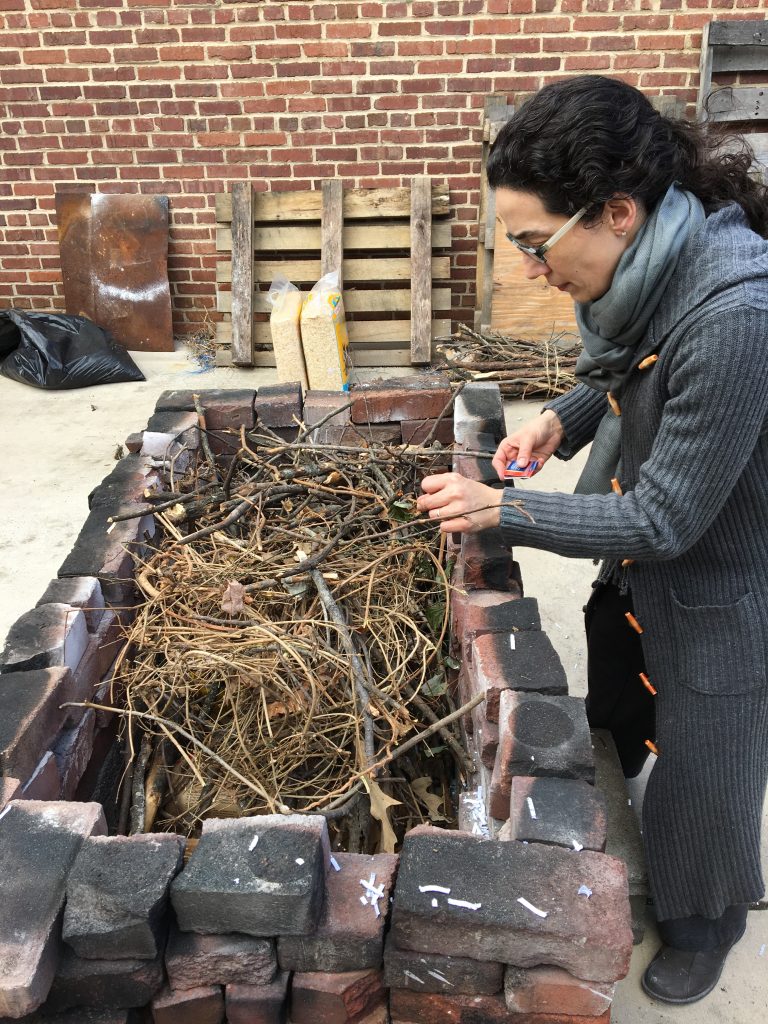 I pit fired the vessels, a low-tech process where we bury the pots in a simple box  constructed with loose bricks and feed the fire with wood for a number of hours. I chose this firing process because it produces dramatic marks that perfectly mirror images of the cosmos. This project is a visual reminder that we are a microcosm of the macrocosm, we are manifestations of the 99 names, and we are each beautifully created and worthy of respect and dignity. The entire process was an attempt to embody and enact a sacredness that was defiled in the way I was treated by my bigoted co-workers.

I had a few ideas about how I wanted the vessels to live in the world, namely to have 99 Muslim women hold the pots while reciting the 99 names of God, known as dhikr, or remembrance, which is a powerful ritual of affirmation. But I got busy with life and then the global Covid-19 pandemic dashed any hope of sharing the vessels in a crowded public setting.

One day, while working at my dining room table, I faced the half-wall of glass shelves where the 99 vessels were stored. They called out to me, “why are we sitting on a shelf in this cabinet when we should be sharing the gifts we shared with you?” I was inspired but feeling stuck by what sharing might look like, so I got in conversation with my art community at Red Dirt Studio in Mount Rainier, Maryland, an incubator of multimedia artists founded by clay artist, soil lover, and community organizer Margaret Boozer in 1996. 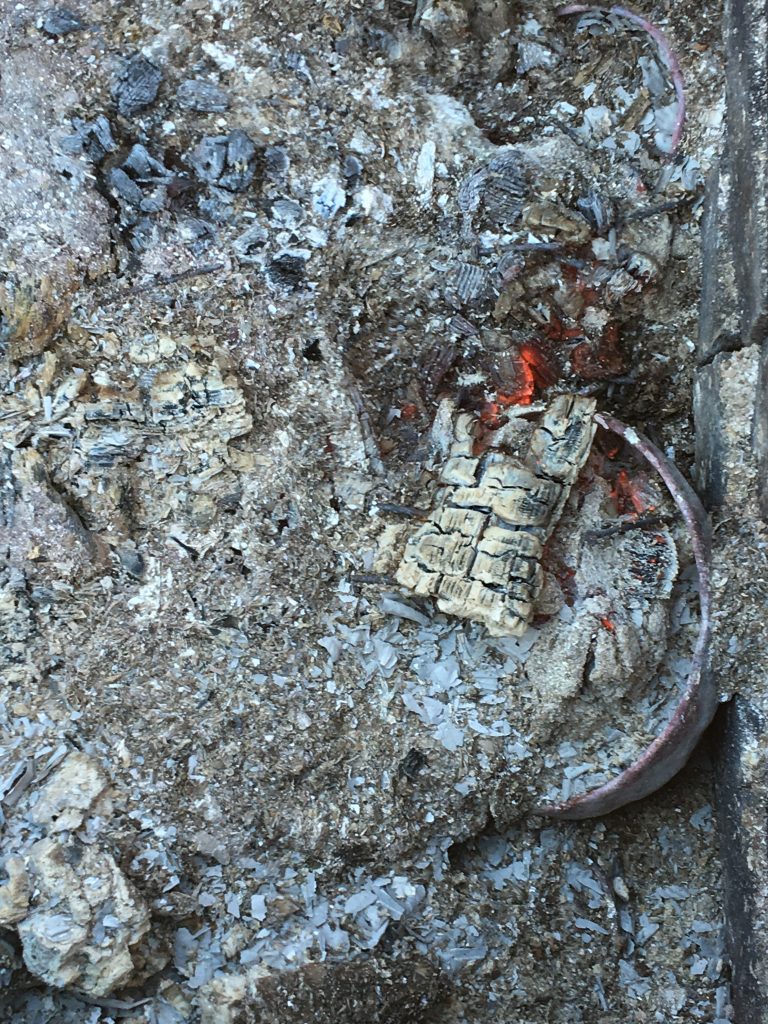 After a productive critique, I reached out to Homayra Ziad, one of my colleagues in the aforesaid interfaith organization. After an anti-Palestinian smear campaign precipitated by a MuslimMatters article calling out efforts by the Shalom Hartman Institute to fund a cadre of non-Palestinian Muslims to ridicule and justify the occupation of Palestine, Homayra left the organization to direct the Islamic Studies Program at Johns Hopkins University. As a scholar of Islamic spiritual traditions, she offered to curate a collection of 99 Muslim authored poems that use clay, fire, and water as metaphors of spiritual transformation, another healing resource in the project, rooted in Islamic traditions.

We then reached out to Sabrina N’Diaye, a psychotherapist and healer based in Baltimore who facilitates storytelling workshops all over the world with communities that have experienced trauma. She designed a three-day, ten-hour online workshop for groups of 11 Muslim women (to numerically align with the 99), an opportunity to reflect on experiences of trauma or heartbreak that come up for them in the workshop, which consists of multiple dialogue and writing prompts, interspersed with contemplative readings of specific characteristics included in the 99 names that surface in the conversation.

As women identify a story that inspires them, we ask them to think about the art form they will use to share it on the 99clayvessels.com website. The role of artmaking in this project is to channel our creative potential as a practice of restoration. Making things with our hands fuels our imagination, opening possibilities about how we continue our healing by crafting a story that leaves us with a visual reminder of that transformative potential. In the sharing and releasing of these memories as individuals in community, we fuel the creation of a story, the channeling of Al Khaliq, The Creator, a definitive act of taking ownership over our own experiences and our representation. The storytelling workshops in this project are a celebration of Muslim women’s diverse self-expression, experiences, identities, and power.

The Muslim women participants all identify as social justice activists and advocates in different disciplines, connecting the personal and political struggle for justice. Importantly, not all the stories are outward facing, but include stories of intra-Muslim discrimination based on gender, sexuality, ethnicity, race, and class discrimination which is intensified or reinforced in the context of Islamophobia. We make space in this project for women to share any experiences of bigotry, including bigotry perpetrated by other Muslims, to honor the reality that experiences of bigotry are not discrete and cannot be easily demarcated and categorized. Capturing complex and intersectional stories allows for a greater breadth and depth of understanding of Muslim women’s experiences. The storytelling workshop participant lists evolved organically from personal contacts, who then suggested friends and colleagues, and continuously grew from each conversation with each participant. We are also working in collaboration with Muslim women-led nonprofits to offer workshops tailored to the communities they serve. 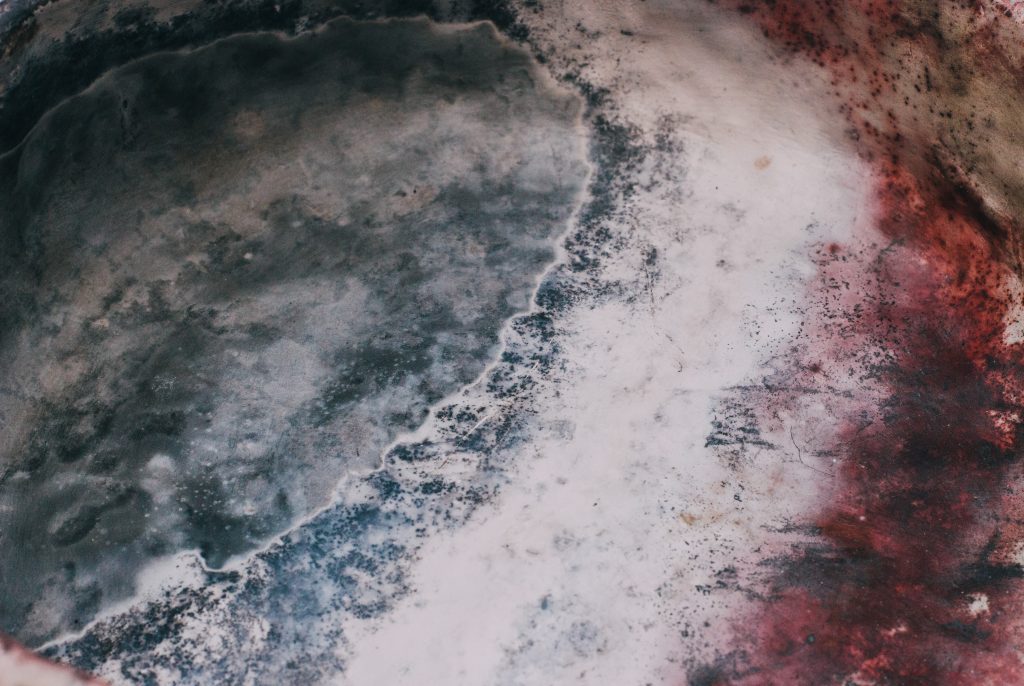 Our first storytelling workshop started in late May 2021 and over 60 women participated in the six workshops we offered so far. The accumulating artwork and stories provide a rich collage of experiences and perspectives. For example, Aseelah Rashid, an entrepreneur, interfaith leader, justice advocate and trained fashion designer, created a Letterman’s jacket that she wishes she had in 1oth grade to protect her from a respected teacher who ridiculed Aseelah’s religion. DJ Kiran, also known as Darakshan Raja, co-founder and co-director of Justice For Muslims Collective, a organization that focuses on fighting Islamophobia and building power among Muslim communities with a focus on the Greater Washington region, created a playlist of music as an expression of her passion to cultivate joy through music. Rahmah A. Abdulaleem, Executive Director of KARAMAH: Muslim Women Lawyers for Human Rights, wrote a talk back poem inspired by anti-slavery activist Sojourner Truth’s 1851 speech,  Ain’t I A Woman. Rahmah’s Ain’t I A Muslim Woman poem, offers a pointed critique of the way she is treated as a Black Muslim woman from Muslims who do not respect Black contributions to Islamic thought and practice in the U.S. In the latest cohort centered around the Asma Al Husna: Al Rahman and Al Raheem, Muslimmatters editor-in-chief Hena Zuberi wrote about her marriage, activism and finding herself. “The workshop really forces us look deep at why we do the work that we do and what is blocking us from taking the next steps in our j0urney,” says Hena.

In addition to the 99 clay vessels, I also created a story about the woman who victimized me in the interfaith organization inspired by the Quranic verse, “God is closer to you than your jugular vein.”

The project is ongoing as we still have four more storytelling workshops to complete to collect all 99 stories. The website will also eventually include a commissioned art video recitation of the 99 names of God by Salihah (Sasa) Aakil, a multimedia artist and writer. My final dream for the project is to gather a group of 99 Muslim women to practice a recitation of the 99 names over a series of months and then, as part of a larger exhibition of all the stories, perform the dhikr live, each woman holding one of the 99 vessels, as a final culminating celebration. The completed website of visual art, vocal recitation, and poetry serves as an ongoing online art exhibition, healing resource, publicly accessible learning tool, and historical archive, a beautiful heartfelt testament to the power of that which connects us to each another, the Oneness of It All.

Alison Kysia is a multimedia artist who creates socially engaged artwork about Muslims and Islamophobia. She is a resident artist at Red Dirt Studio in Mt. Rainier, Maryland, where she is working on a series of artwork about the impacts of the 9/11 era on Muslims and other targeted communities, including 99 Clay Vessels: The Muslim Women Storytelling Project. Previously, as an education activist, she wrote a series of teaching lessons on anti-Muslim bias called the Challenge Islamophobia Project and was a facilitator for the Muslim Anti-Racism Collaborative.