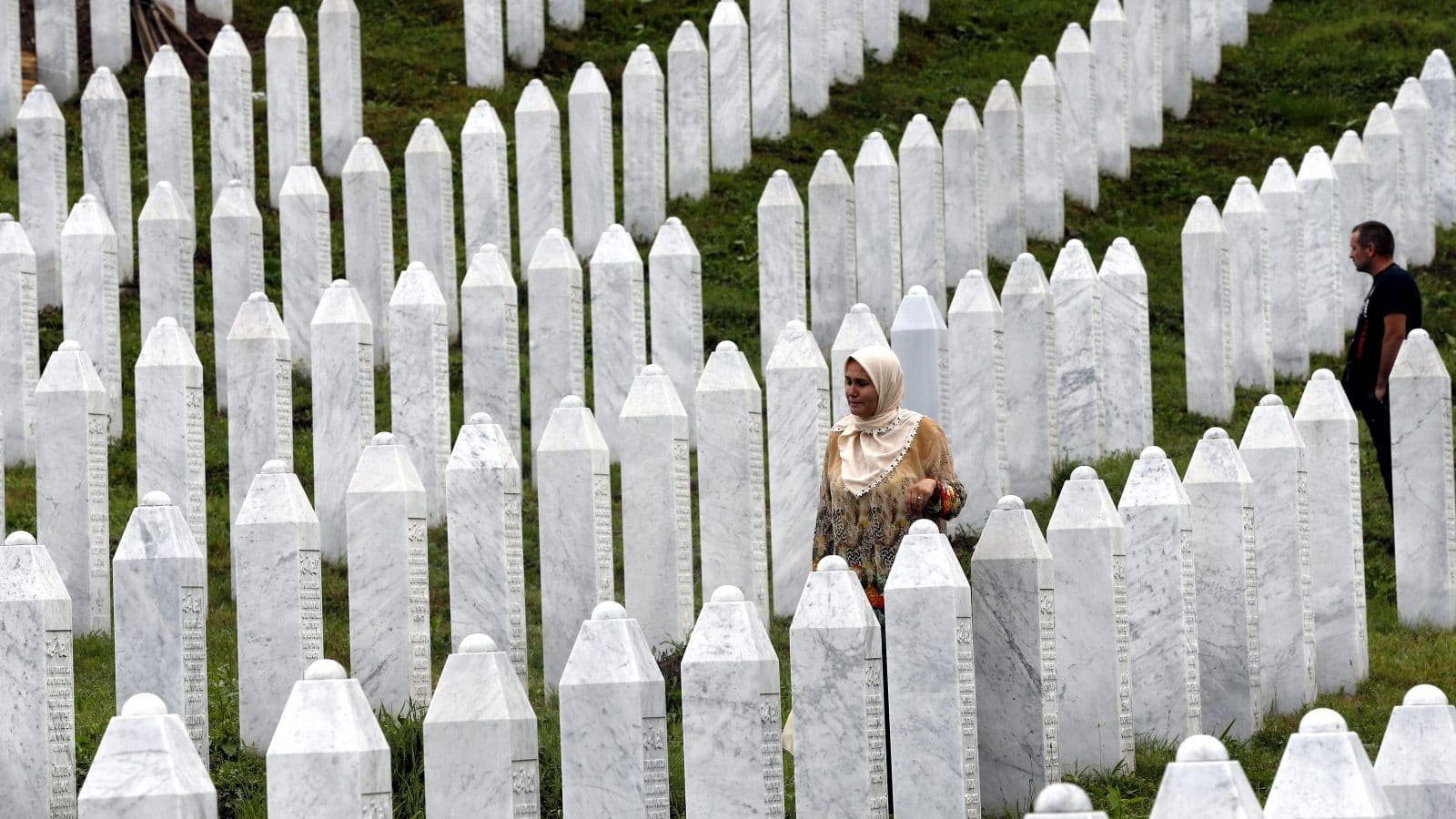 The expanding train of the Srebrenica genocide deniers includes the Nobel laureate Peter Handke, an academic Noam Chomsky, the Serbian Prime Minister Ana Brnabić, as well as almost all Serbian politicians in Serbia and Bosnia-Herzegovina. One name in this group weirdly stands out: “Sheikh” Imran Hosein. A traditionally trained Muslim cleric from Trinidad and Tobago, Hosein has carved his niche mostly with highly speculative interpretations of Islamic apocalyptic texts. He has a global following with more than 200 hundred thousand subscribers to his YouTube channel, and his videos are viewed by hundreds of thousands. He has written tens of books in English, some of which had been translated into major world languages. His denial of the Srebrenica genocide may seem outlandish, coming from a Muslim scholar, but a close inspection of his works reveals ideas that are as disturbing as they are misleading.

Much of Hosain’s output centers around interpreting the apocalyptic texts from the Qur’an and Sunnah on the “end of times” (akhir al-zaman). As in other major religious traditions, these texts are highly allegorical in nature and nobody can claim with certainty their true meaning – nobody, except Imran Hosein. He habitually dismisses those who disagree with his unwarranted conclusions by accusing them of not thinking properly. A Scottish Muslim scholar, Dr. Sohaib Saeed, also wrote about this tendency.

In his interpretations, the Dajjal (“anti-Christ”) is American-Zionist alliance (the West or the NATO), the Ottomans were oppressors of the Orthodox Christians who are, in turn, rightfully hating Islam and Muslims, Sultan Mehmed Fatih was acting on “satanic design” when he conquered Constantinople, the terrorist attacks of 9/11 were a false flag operation carried out by the Mossad and its allies, and – yes! – the genocide did not take place in Srebrenica. Such conspiratorial thinking is clearly wrong but is particularly dangerous when dressed in the garb of religious certainty.

Hosain frequently presents his opinions as the “Islamic” view of things. His methodology consists of mixing widely accepted Muslim beliefs with his own stretched interpretations. The wider audience may not be as well versed in Islamic logic of interpretation so they may not be able to distinguish between legitimate Muslim beliefs and Hosain’s own warped imagination. In one of his fantastic interpretations, which has much in common with the Christian apocalypticism, the Great War that is nuclear in nature is coming and the Muslims need to align with Russia against the American-Zionist alliance. He sees the struggle in Syria as part of a wider apocalyptic unfolding in which Assad and Putin are playing a positive role. He stretches the Qur’anic verses and Prophetic sayings to read into them fanciful and extravagant interpretations that are not supported by any established Islamic authority.

Hosain does not deny that a terrible massacre happened in Srebrenica. He, however, denies it was a genocide, contradicting thus numerous legal verdicts by international courts and tribunals. Established by the United Nations’ Security Council, the International Criminal Tribunal for the former Yugoslavia (ICTY) delivered a verdict of genocide in 2001 in the case of the Bosnian Serb General Radislav Krstić. The International Court of Justice (ICJ) in the Hague confirmed, in 2007, that genocide took place in Srebrenica. In 2010, two more Bosnian Serb officers were found guilty of committing genocide in Bosnia. The butcher of Srebrenica, Ratko Mladić, was found guilty of genocide in 2017.

In spite of this, and displaying his ignorance on nature and definition of genocide, Hosain stated in an interview with the Serbian media, “Srebrenica was not a genocide. That would mean the whole Serbian people wanted to destroy the whole Muslim people. That never happened.” In a meandering and offensive video “message to Bosnian Muslims” in which he frequently digressed to talking about the end of times, Hosain explained that Srebrenica was not a genocide and that Muslims of Bosnia needed to form an alliance with the Orthodox Serbs. He is oblivious to the fact that the problems in Bosnia and Herzegovina and in the former Yugoslavia stem not from the Bosniaks’ purported unwillingness to form an alliance with the Serbs, but from the aggressive Greater Serbia ideology which had caused misery and destruction in Bosnia, Slovenia, Croatia, and Kosovo.

Hosein’s views are, of course, welcome in Serbia and in Republika Srpska (Serb-dominated entity within Bosnia), where almost all politicians habitually deny that genocide took place in Srebrenica. He had been interviewed multiple times on Serbian television, where he spewed his views of the Ottoman occupation and crimes against the Serbs, the need to form an alliance between Muslims and Russia, and that Srebrenica was not a genocide. His website contains only one entry on Srebrenica: a long “exposé” that claims no genocide took place in Srebrenica. Authored by two Serbs, Stefan Karganović and Aleksandar Pavić, the special report is a hodge-podge of conspiracy theories, anti-globalization and anti-West views. Karganović, who received more than a million dollars over a six year period from the government of the Bosnian Serb-led Republika Srpska for lobbying efforts in Washington, was recently convicted by the Basic Court in Banja Luka on tax evasion and defamation. The Court issued a warrant for Karganović’s arrest but he is still on the loose.

True conspirators of the Srebrenica killings, according to Hosain, are not the Serbian political and military leaders, and soldiers who executed Srebrenica’s Muslims. The conspirators are unnamed but it does not take much to understand that he believes that the massacres were ultimately orchestrated by the West, CIA, and NATO. Hosain even stated on the Serbian TV that if people who knew the truth were to come forward they would be executed to hide what really happened. Such opinions are bound to add to an already unbearable pain that many survivors of the Srebrenica genocide are experiencing. It is even more painful when Bosniak victims – who were killed because they were Muslims – are being belittled by an “Islamic” scholar who seems to be more interested in giving comfort to those who actually perpetrated the heinous crime of genocide than in recognizing the victims’ pain. These views are, of course, welcome in Serbia, Russia, and Greece.

It is not difficult to see why Hosain’s views would be popular in today’s day and age where misinformation and fake news are propagated even by the world leaders who should know better. A conspiratorial mindset, mistrust of established facts, undermining of international institutions – these are all hallmarks of the post-truth age. In another time, Imran Hosain would be easily exposed for what he truly is: a charlatan who claims religious expertise. Today, however, his opinions are amplified by social media and by the people who already question science and established facts. For these reasons, he needs to be unmasked to safeguard the very religious foundations which he claims to uphold but ultimately undermines.

Will The Real Aya Sofia Please Stand Up?

A Festival Amidst a Pandemic: How to Give Your Kids an Eid ul-Adha to Remember

Ermin Sinanović is executive director of the Center for Islam in the Contemporary World (CICW) at Shenandoah University, where he is also Scholar in Residence. His Twitter is @SinanovicErmin, and his personal website is www.erminsinanovic.com.