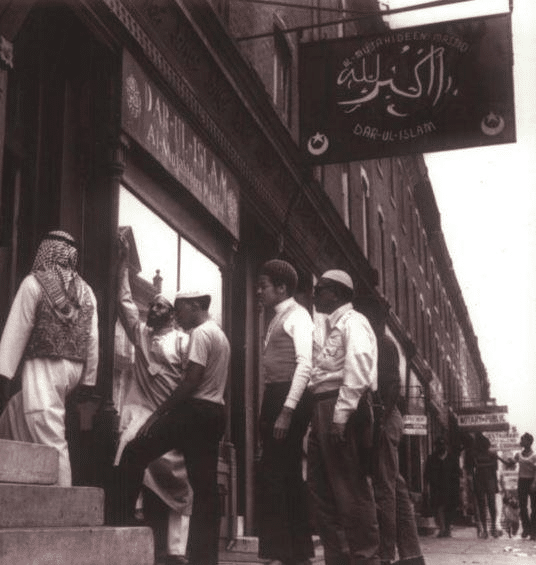 Much of the history about Islam in United States of America and of the pioneering Muslims upon who’s shoulders we stand, has never been told. Some of them unfortunately may never be told and may die with the death of those who were there. When it comes to American Muslim history, the narratives of those who lived it is more poignant than that of those who only heard about it. As in the hadith of the Prophet

One story that has remained largely unchronicled is that of the Darul Islam movement. Darul Islam was an early indigenous Sunni Muslim community made up of Black American Muslims and converts to Islam. At its height, it comprised 25-30 Muslim communities and masaajid across the country. It was started by Rajab Mahmood and Yahya Abdul-Karim, who were formally attendees of the famous State Street Mosque in Brooklyn, New York in the Atlantic Ave area west of Flatbush. The State St, Mosque which was started by was Dawud Faisal, a Black man who came to the United States from the Caribbean to pursue a career in jazz music, became a beacon for early Muslim immigrants as there was already a spate of Arab businesses along Atlantic Ave near third street, not far from the Mosque. My father used to take us to Malko Brothers bakery on Atlantic Ave in the early sixties where we would buy pita bread and halal meat from one of the other stores. It was one of the few places you could buy pita bread on the East Coast and there was no such thing as a halal store in America then.

Partially because Shaykh Dawud was black, and perhaps because of his jazz background and affiliation, the Masjid also attracted Black American converts to Sunni Islam. Many early Sunni Muslims were associated with and came from jazz musicians.  The Legendary John Coltrane was reported to have been a Muslim, he was married to a sister named Amina and his daughter was named Na’eema. My father performed her marriage in New York in the 1980’s. It’s rumored that he never publicized his Islam because it would have damaged his career as it had done to so many others. Hajj Talib Dawud, who started a masjid in Philadelphia (not related to the Darul Islam movement), used to be a trumpet player for Dizzy Gillespie.

Meanwhile, , there was a chasm between immigrant Muslims who were new to the country. Converts to Islam, who were overwhelmingly Black, were new to Islam.  In 1960, Shaykh Dawud hired a teacher who was Hafiz al-Quran named Hafiz Mah’boob — he was associated with the Tabligh Jamaa’ah movement— but he was Black or looked black. The young African American converts, Rajab Mah’mood, Yahya Abdulkarim, Suleiman Abdul-Hadi (my uncle and one of the founding members of The Last Poets), Muhammad Salahuddin, and others. were drawn to him, He was “down” with educating the brothers from America and he used to teach them Arabic and Islam. It was a different time then and the immigrant, mainly Arab Muslims, and the Black American converts to Islam were from two different worlds. There was an unspoken uneasiness. Eventually Hafiz Mah’boob suggested that the African American brothers go and start their own masjid.

Rajab Mah’mood and Yahya AbdulKarim eventually left the State Street Mosque and started their own Masjid in Brownsville, one of Brooklyn’s toughest neighborhoods, they named it Yasin Mosque, and that was the beginning of the Darul Islam Movement in the United States. That’s also just the beginning of the story.

I was born and raised a Sunni Muslim in Philadelphia, PA; my parents converted to Islam in the 1950’s.

I was raised in the Darul Islam movement; my father Shaykh Abdu-Karim Ahmad, was one of their Imams for a time in Philly. So was my cousin Shaykh Ali Ahmad. Both who are still alive today. There are many narrations yet to be told, that shed a little light and context, about Muslim America today.

Taken from the Upcoming Book. “The History of the Darul Islam Movement in America”

Searching for Signs of Spring: A Short Story