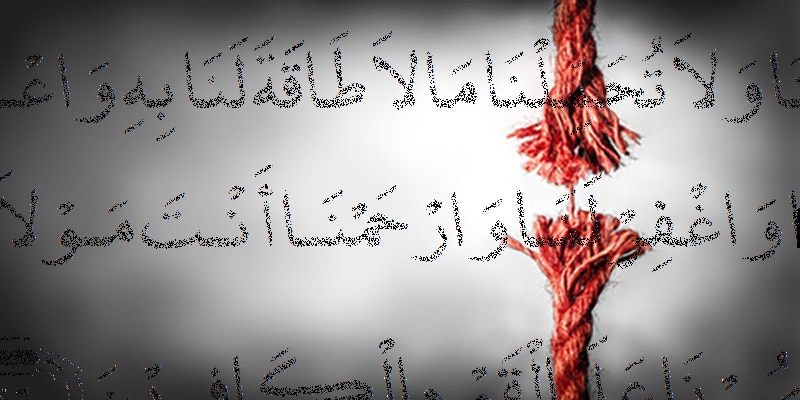 We are the walking wounded, the mothers with bleeding hearts and emptied wombs, the mothers whose minds are on the verge of breaking. We are the women whose souls are frozen in fear – for we are told that we are weak, impatient, failures as believing women.

Only Allah knows our agony, when everyone else refuses to see or hear our pain.

When the Qur’an speaks of motherhood, it is not with words of false sweetness, nor promises of unbridled joy. Instead, Allah speaks to us with the rawness of our own experiences: wahnun 3ala wahn; hamalat’hu karhan wa wadha3at’hu karhan… weakness and pain upon weakness and pain. The word “karhan” shares the same root as the word “karaaha” – something that is hated. The pain that a mother experiences is unimaginable, a pain that anyone would hate to experience – and yet, it is what women endure, over and over again.

The greatest of all women, Maryam bint Imraan (‘alayhassalaam), cried out during labour,

The burden placed on Muslim women to experience motherhood – to perform motherhood – as the completion of her feminine identity and epitome of self-worth, as the measure of her womanhood and of her spirituality, is a burden that we do not find in the Qur’an and Sunnah.

How then do we have the audacity to place this burden on women?

Although no one can deny the status of mothers in Islam, we can no longer afford to deny the complicated reality of motherhood for Muslim women. Even in a time when women are more educated than ever, cultural expectations disguised as Islamic advice often dictates entire aspects of our lives. In many countries and cultural enclaves, there is no consideration as to whether a woman wants to be a mother; she is simply expected to be one, and expected to be happy about it, as soon as she is married – and if she isn’t pregnant soon, then she is expected to seek every means possible to ensure that pregnancy occurs, immediately. After the first pregnancy, a second is expected by the time two years are up; and after that, another one, and another one. The physical, mental, and emotional health of these mothers is rarely given consideration.

Lectures on “the status of women in Islam” and “the rewards for motherhood in Islam” almost never talk about those women whose pregnancies were neither chosen, wanted, nor welcomed; women in abusive marriages whose pregnancies were not cause for joy and celebration, but as yet another chain binding them to their abusers; women whose physical and mental health are sacrificed, over and over, on the altar of motherhood; women whose husbands demand children over and over again, and then are disgusted with the changing of their bodies, and seek fresh, nubile flesh elsewhere. There are women whose marriages are happy and healthy, but do not want children for reasons of their own – and who find themselves pressured into pregnancy, only to find themselves completely disconnected from their babies, wondering what is wrong with their womanhood. There are women who spend their pregnancies excited and overjoyed in anticipation of their offspring, but within days or weeks of birth, catch themselves with thoughts so dark that they are terrified to every speak of them. There are women who spend years functioning as mothers, raising their children and loving them – and yet do not understand what it means to feel the maternal bond.

For these women, motherhood is trauma

The trauma that these Muslim women experience from motherhood is exacerbated by the lack of empathy, compassion, and mercy shown to them. There is a culture of romanticizing motherhood in a way that even our foremothers would not recognize – a demand that all pain be willed away, that no sign of discomfort be shown, that a mother should smile and express only joy and radiance. Worse still, Muslim women have been taught the warped idea that their spirituality – their very relationship with their Creator – is tied to their fertility and their motherhood. Women who do not choose motherhood, or women who struggle with motherhood, are viewed as spiritually diseased, as weak, as dangerous, as worthy of suspicion, sources of corruption.

There is no place for women who struggle with pregnancy, who spend each second overcome by sickness that is more than just physical; for women who find themselves impregnated against their wills, for women whose bodies treat the fetus within them as a parasite rather than a gift; for women whose despair throughout motherhood suffocates all other emotion.

In the face of this pressure, so many Muslim mothers find themselves even more overwhelmed than they already were. The struggle to perform motherhood ‘the right way’, when they don’t have the basic support that they need, leads to trauma being magnified. Many mothers find themselves trapped with imposter syndrome, despairing at their lack of maternal competence, convinced that at any moment, the full extent of their perceived failures will be revealed – and their shame made public. The trauma, the pressure, and the stress take a terrible toll on these women, in multiple ways. Their physical health declines, their mental health increasingly deteriorates, and their spiritual well-being crumbles daily.

Perinatal depression, in addition to postpartum depression, are – like so many other women’s health concerns – conditions which are ignored, dismissed, and denigrated, despite the serious impact of those conditions on mothers and their children alike.

“Author and well known obstetrician, Christiane Northrup (2005) shares that if a pregnant mother is going through high levels of fear or anxiety she creates a “metabolic cascade.” Hormones known as cytokines are produced and the mother’s immune system is affected, including her child’s. Chronic anxiety in the mother can set the stage for a whole array of trauma based results such as prematurity, complications of birth, death, and miscarriage.”

When mothers suffer, so do their children. “Perinatal depression has been associated with many poor outcomes, including maternal, child and family unit challenges. Infants and young children of perinatally depressed mothers are more likely to have a difficult temperament, as well as cognitive and emotional delays.”

Some women, with little knowledge or understanding of how to cope with their trauma, unintentionally inflict trauma upon their children, through emotional or even physical abuse. Some may find themselves completely withdrawn, unable to do little more than perform the basic functions required to keep their children alive; these children, who desperately need physical and emotional nurturing, struggle with attachment issues and will often deal with severe emotional dysfunction in their adult lives. Some women are plunged so deeply within their pain that they cannot fathom a way out – except through death.

It is direly necessary for the conversations on motherhood in the Ummah to shift. The fear of “feminist brainwashing” is both stupid and dangerous; it is laughable to think that anyone could launch a full-scale prevention of pregnancy, especially in the Muslim Ummah, whose birth rates are already responsible for our ever-increasing population. The real issue is not about whether women will keep having babies (they will), but whether we actually care about these women in the first place – and whether we care enough about them that we are willing to overcome our own cultural dictats and instead place the well-being of these women as a priority. Pressuring women into pregnancy will not benefit them, their families, or the Ummah at large; providing support to women who find themselves struggling is a matter of communal obligation towards the believing women of this Ummah. The belief that “Muslims don’t deal with this” is a fiction; statistics show that Pakistan has a postpartum depression rate of 63.3%. In Canada, 23% of new mothers reported feelings consistent with either postpartum depression or an anxiety disorder. Those under the age of 25 had the highest rates of such feelings compared to any other age group.

When women are going through wahnun 3ala wahn, our role is not to judge them, to shame them, or to tear them down. Our role – men and women alike – is to recognize in these struggling mothers the Words of Allah, to honour them, to support them, and to provide them what they need to regain their strength in every way. Our role is to be their awliyaa, their companions and their comfort; our role is to give them the love they so desperately need, in this time of pain and hardship and difficulty that we cannot even begin to understand. Our role is to educate ourselves, to raise awareness of these serious medical and psychological conditions, and not to perpetuate the harmful beliefs and mentalities that have made the suffering of many women so much worse. Our role is to think carefully about what we teach about motherhood, how we treat struggling mothers, and whether our conduct with such women reflects the mercy and compassion of the Most Merciful, Whose very name is connected to the wombs which bear every new generation of believers.

ArRahman recognizes the pain that every mother’s rahm feels – and so should we.

How to Optimize Your Free Time