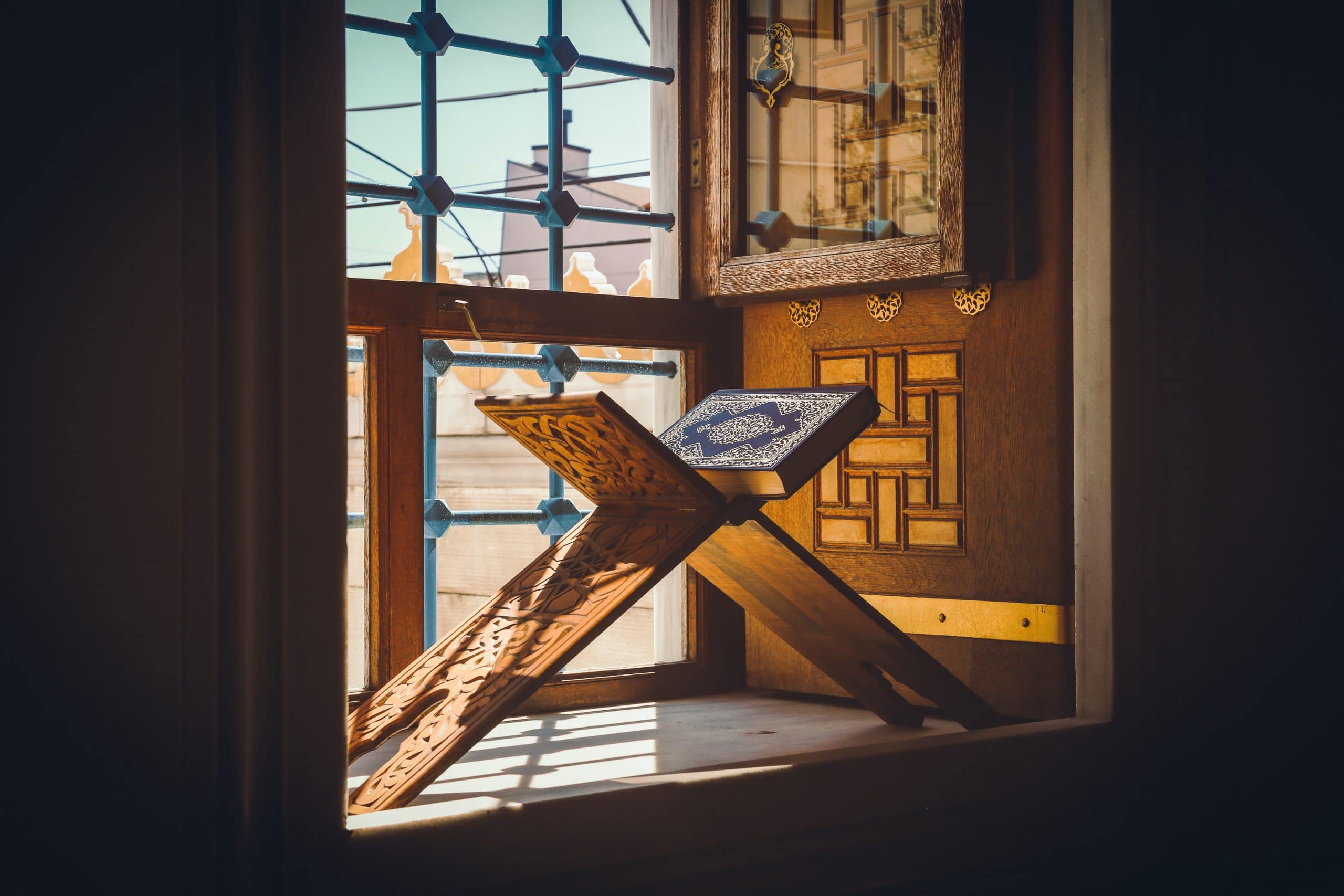 We are definitely living in unusual and unprecedented times. I don’t think any of us ever imagined that we would live through a time when the doors of our masājid are closed. There is no five-time daily congregational prayer, no Friday prayer, and most likely no Tarāwīḥ prayer in the masjid this year. This is something that definitely weighs heavily upon the heart and is a genuine reason to be sad. It is a time for introspection and turning back to Allah ﷻ.

Alḥamdulillah, Ramaḍān, the month of unimaginable mercy, grace, and forgiveness is right around the corner. It is an opportunity for us to refocus, renew our faith, and strengthen our relationship with Allah ﷻ through various forms of worship. We’re going to be spending our days fasting and our nights praying. One of the special acts of worship we engage in during this beautiful month is praying tarāwīḥ.

However, this year Tarāwīḥ is going to be different. We aren’t going to feel that same excitement and energy of our masājid being full and standing shoulder to shoulder with our brothers and sisters (separately of course) listening to the Imām recite the eloquent, profound, and beautiful words of Allah ﷻ. To be honest, this is one of the things I look forward to and enjoy most in the month of Ramaḍān. Seeing the masjid full on a nightly basis is an extremely beautiful sight and fills my heart with true joy. This year we will find new ways of experiencing the beauty of Ramaḍān. The purpose of this  brief article is to provide some guidance for praying tarāwīḥ at home. If you want to skip the Fiqh details and want direct answers please skip to the summary at the end.

Jurists from all four schools of thought agree that tarāwīḥ prayer is a Sunnah for both men and women. According to the Ḥanafīs, Ḥanbalīs and some Mālikīs it’s an emphasized Sunnah. The Prophet ﷺ established it as a practice and encouraged his companions to do so as well. ʿAbd al-Raḥmān ibn ʿAwf (ra) narrated that the Prophet ﷺ said, “Allah has made fasting the month of Ramadān obligatory upon you and I have made standing in prayer during its nights a practice.” Abū Hurairah narrated that the Prophet ﷺ would encourage his companions to stand in prayer at night without commanding them to do so. He would say, “Whoever stands in prayer at night during Ramadān with faith and expecting reward, his previous sins will be forgiven.” The commentators on this narration mention that it’s referring to tarāwīḥ prayer. This Sunnah can be practiced and fulfilled by praying at home. Under these circumstances, where the masājid are closed, we shouldn’t feel that our practice or performance of tarāwīh at home is in some way deficient. The narrations mentioned above are general and absolute and do not specify where tarāwīḥ should be performed. Allah’s mercy is infinite and inshAllah we will receive unimaginable rewards for praying at home.

According to the Ḥanafīs, praying tarāwīḥ at the masjid is a communal Sunnah (Sunnah ʿalā al-kifāyah). If some members of the community are praying in the masjid they will be fulfilling the Sunnah on behalf of the entire community and if the entire community abandons it they would be blameworthy. If an individual decides to pray at home they would be missing out on some virtue. If they pray in congregation at home they would miss out on the virtue of praying in congregation at the masjid. According to the Shāfiʿīs and Ḥanbalīs, praying tarāwīḥ in congregation at the masjid is also more virtuous. According to the Mālikīs, it is recommended to pray tarāwīḥ at home as long as the masājid are not abandoned and the individual will pray it at home and not skip it. All of this is under normal circumstances. In our current situation, the only option we have is to pray at home and by doing so we will, inshAllah, be fulfilling the Sunnah and deserving of the full virtue and reward of having our previous sins forgiven.

Can I Pray Tarāwīḥ while Reading from the Muṣḥaf?

The short answer, yes. According to the Mālikīs, Shāfiʿīs, and Ḥanbalīs it is permissible for the Imām to recite from the muṣḥaf while praying voluntary prayers, including tarāwīḥ. According to the Ḥanafīs, specifically Imām Abū Ḥanīfah (r), it is impermissible for the Imām to recite from a copy of the muṣḥaf and doing so will invalidate the prayer.  The rationale mentioned behind this ruling is that reading from the muṣḥaf entails excessive movement (ʿaml kathīr) or learning (talaqqun), and both invalidate the prayer.

However, the two students of Imām Abū Ḥanīfah (r), Abū Yūsuf and Muḥammad (r), disagreed with their teacher and were of the opinion that it doesn’t invalidate the prayer, but is still disliked. They argue that looking in the muṣḥaf itself is a form of worship and does not invalidate the prayer. However, it is disliked because it resembles the worship of the People of the Book (tashabbuh bi Ahl al-Kitāb).

As understood from the above, this is an issue in which there is a valid and legitimate difference of opinion. As someone who ascribes to the Ḥanafī School of thought in issues of jurisprudence, studied it, and has been teaching it for the past nine years, under these circumstances I would argue that there is absolutely nothing wrong with acting upon the opinion of the Mālikīs, Shāfiʿīs, Ḥanbalīs, and the Ṣāḥibān, Abū Yūsuf and Muḥammad (r).

Building off the position of the Ṣāḥibān, I would also argue that it is not disliked for the imām to read from the muṣḥaf in tarāwīḥ because it doesn’t entail tashabbuh. The disliked nature of tashabbuh is derived from the statement of the Prophet ﷺ said, “Whoever [intentionally] copies a people, he is from them.” There is a difference between resembling (mushābahah) a people and intentionally resembling (tashabbuh) a people. Our Ṣaḥīḥ al-Bukhārī teacher when explaining this ḥadīth provided very important clarification regarding the intended meaning of the ḥadīth. He mentioned that, first and foremost, linguistically the verb “tashabbaha” is on the pattern tafaʿala (verb form v) that conveys the meaning of intentionality (takalluf). Based on this, tashabbuh is intentionally trying to imitate, copy, or resemble the practice or dress of someone. Secondly, the dress or act that is being copied or imitated has to be a dress or act that is exclusive to a particular group of people or religion. Third, tashabbuh can vary based on time, place, context, and custom. What is considered tashabbuh in one generation, society, or locality may not be tashabbuh in a different generation, society, or locality. With this understanding of the ḥadīth, an imām reading from a muṣḥaf during tarāwīḥ would not be considered tashabbuh because they are not trying to intentionally imitate the religious practice of another community.

Practical Guidelines for Tarāwīḥ at Home

1) Dedicate a clean and comfortable space for prayer in your home.

2) Set a time to pray ʿIshā’ nightly. Give the adhān, iqāmah, and pray with those at home with you in congregation. If you live by yourself or are the only Muslim in your household still give the adhān and iqāmah as you will be leading a noble congregation of Angels.

4) Pray the two emphasized units of sunnah prayer after ʿIshā’.

5) Pray tarāwīḥ as you would in the masjid with anywhere from 8-20 units. In these units you can recite however much Quran you know from memory or, if you prefer, you can read from the muṣḥaf.

6) If you are reading from the muṣḥaf try your best to complete a recitation of the Quran by reciting one juz’ a night. If not, no worries, simply recite as much as you can.

7) Try your best to engage with whatever portion of the Quran you are reciting by reading the translation, commentary (tafsīr), and reflecting upon the meanings.

9) During this time remove distractions such as your cell phone and other electronic devices.

May Allah ﷻ allow us to reach Ramaḍān, take advantage of its amazing blessings and opportunities, and earn the mercy and forgiveness of Allah ﷻ. May Allah ﷻ keep all of us safe and healthy and return life back to normal as soon as possible.

Corona and the Tragedy of an Atheist