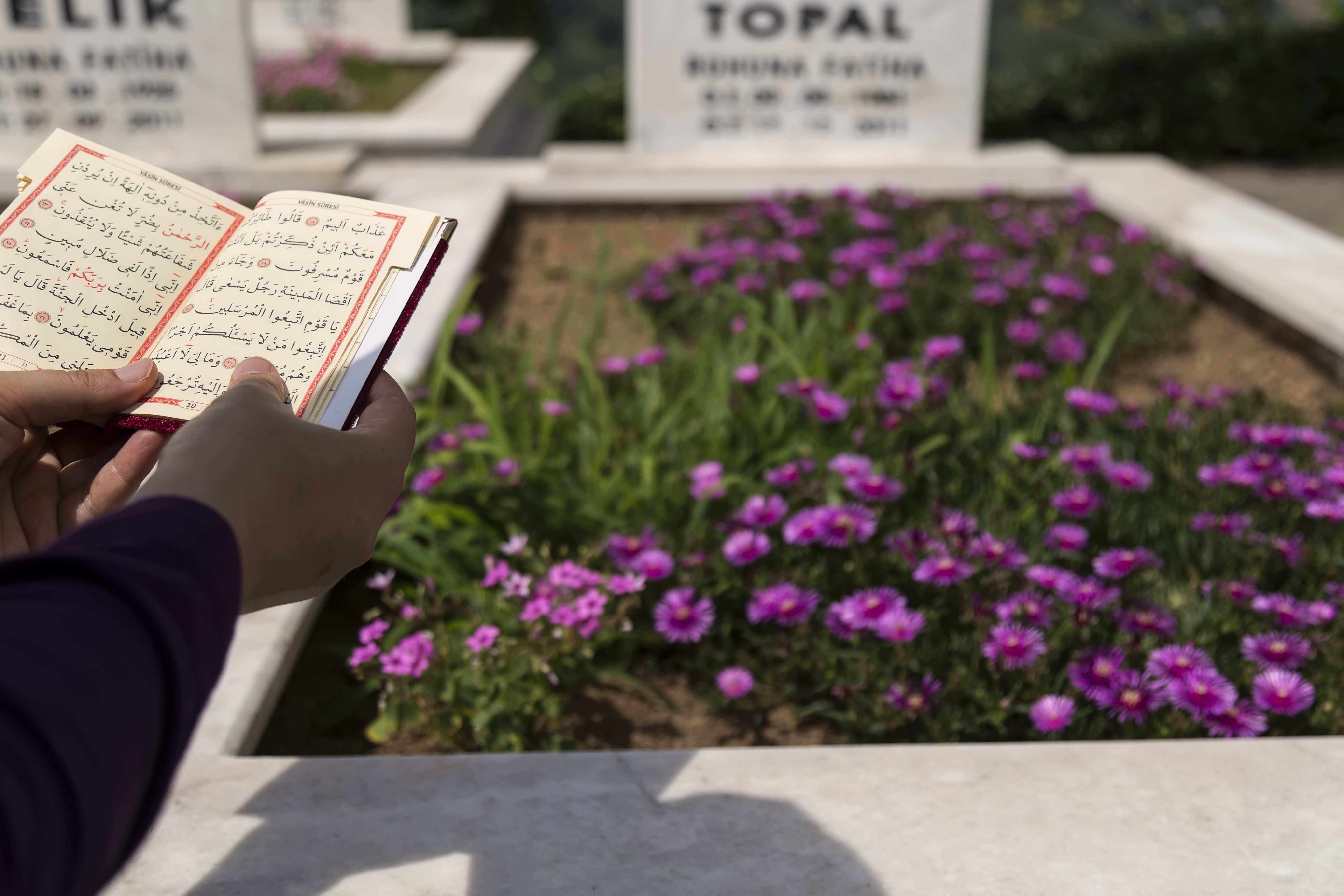 A few weeks ago, my brother passed away, may Allah have mercy on his soul. By Allah’s grace, his funeral was well-attended by many friends, relatives, and students of his, including a number of women. In this context, someone asked me about the Sharia’s guidance regarding women attending the burial of the deceased, and in what follows I consider what leading scholars and the four schools of law (madhhabs) have to say on the issue. The short survey below is by no means exhaustive, something that will need to be left for a much longer piece, but I hope it can be considered representative for the purposes of a general readership.

This is not a fatwa, but rather a brief outline of what past scholars have argued to be the case with some suggestions as to how this might be understood in modern times. Finally, I should note that this is a discussion about accompanying the deceased to their final resting place (ittiba‘/tashyi‘ al-jinaza) after the conducting of funeral prayers (salat al-janaza). Accompanying the deceased on the part of women is considered more contentious than simply attending the funeral prayer, so in general, jurists who permit such accompaniment would allow for attending the prayer, while jurists who do not permit accompaniment of the deceased may be more reluctant to permit prayer. Whatever the specific cases may be, I do not go into this discussion below.

In brief, I have been able to discern three general positions regarding women accompanying the deceased until they are buried: 1. A clear majority of scholars indicate that women are permitted to attend the burial of the deceased, but it is generally discouraged (makruh). 2. Some scholars permitted elderly women’s attendance of the burial unconditionally. 3. Others prohibited all women’s attendance unconditionally.

Overall, it is clear that most schools have permitted women’s attendance of burial, with most of these scholars discouraging it for reasons we shall consider below. The notion that women should not attend the burial of the deceased will thus clearly be shown to be a minority position in the tradition, past and present. Being a minority position does not mean it cannot be practiced, as we will consider in due course. The evidence from the Sunnah is the main legal basis for the ruling, and I shall now consider the most authentic hadiths on the matter.

The general rule for legal commands is that they apply to both genders equally. Accordingly, in a hadith narrated by Bukhari and Muslim, the Prophet

strongly encouraged attending the burial of the deceased. That the ruling for women would be one of discouragement (karaha) rather than of encouragement (istihbab) would thus necessarily arise from countervailing evidence. This may be found in another hadith narrated by both of the earlier authorities. This short hadith is worth quoting in full:

In translation, this reads: Umm ‘Atiyya said, “We were prohibited from following the funeral procession, but it was not insisted upon.”

The Sharia’s ruling on this matter hinges on how this hadith is understood. On this point, scholars of various schools have adopted a range of positions as outlined earlier. But on the specifics of how the wording of the hadith should be understood, it is worth considering the reading of one of the towering figures of hadith studies, Ibn Hajar al-‘Asqalani (d. 852/1449). In his authoritative commentary on Sahih al-Bukhari entitled Fath al-Bari, he glosses the phrase in the aforementioned hadith “but it was not insisted upon” as meaning, “the prohibition was not insisted upon.” He adds: “It is as though she is saying: ‘it was discouraged for us to follow the funeral procession, without it being prohibited.’”

The hadith has, however, been interpreted in various ways by the schools of law. A useful summary of these interpretations may be found in encyclopedic works of fiqh written in recent decades. In his al-Fiqh al-Islami wa-Adillatuhu, the prolific Syrian scholar Wahba al-Zuhayli (d. 1436/2015) notes (on p. 518) that the majority of jurists consider women’s joining the funeral procession to be mildly discouraged (makruh tanzihi) on the basis of the aforementioned hadith of Umm ‘Atiyya. However, he adds, the Hanafis have historically considered it prohibitively discouraged (makruh tahrimi) on the basis of another hadith in which the Prophet reportedly told a group of women who were awaiting a funeral procession, “Return with sins and without reward.”

Al-Zuhayli inclines towards this ruling despite noting in a footnote that the hadith he has just mentioned is weak (da‘if) in its attribution to the Prophet. However, he also adds that the Malikis permitted elderly women to attend the burial of the deceased unconditionally, and also young women from whom no fitna was feared. What constitutes fitna is not generally specified in these discussions and perhaps needs further study, but one contemporary Hanafi defines it as “intermingling with the opposite sex,” and thus suggests that where there is no such intermingling between members of the opposite sex, it is permissible for young women to attend funerals and burials.

Another valuable encyclopedic source for learning about the juristic rulings of various schools and individual scholars is the important 45-volume al-Mawsu‘a al-Fiqhiyya compiled by a team of scholars and published by the Kuwaiti Ministry of Endowments a quarter of a century ago. In its section on this issue, it notes that the Hanafis prohibitively discourage women’s attendance of the funeral procession, the Shafi‘is mildly discourage it, the Malikis permit it where there is no fear of fitna, and the Hanbalis mildly discourage it. The reasoning behind these positions may be found in the Arabic original, and ought to be made available in English by Muslims in the West investing in translating such voluminous works into English.

From the above, we may gather that of the four schools, only the pre-modern Hanafis prohibit women’s attendance of funeral processions. I have already indicated one example of a modern Hanafi who moves closer to the position of the less restrictive schools in this issue, but it is worth highlighting another. Shaykh Nur al-Din ‘Itr (b. 1355/1937), one of the greatest Hanafi hadith experts alive today, in his commentary on the hadith of Umm ‘Atiyya writes that the report indicates that women’s attending a funeral procession is only mildly discouraged (makruh tanzihi). Additionally, in a footnote, he criticises a contemporary who interprets the hadith as indicating prohibition and then proceeds to cite the less restrictive Maliki position with apparent approval.

The fiqh of modernity

In none of the above am I necessarily arguing that one of these positions is stronger than the other. I present these so that people may be familiar with the range of opinions on the matter in the Islamic tradition. However, this range also indicates the existence of legitimate difference of opinion that should prevent holders of one position from criticising those who follow one of the legitimate alternatives with the unfounded charge that they are not following the Qur’an and Sunna.

Furthermore, there are often interesting assumptions embedded in the premodern juristic tradition which modern Muslims find themselves out of step with, such as the assumption that women should generally stay at home. This is clearly an expectation in some of the fiqh literature, and in modern times, we sometimes find that this results in incoherent legal positions being advocated in Muslim communities. We find, for example, that in much of the premodern fiqh literature, Hanafis prohibit women from attending the mosque for fear of fitna, while we live in times in which women frequently work outside the home. As one of my teachers in fiqh, the Oxford-based Hanafi jurist Shaykh Mohammad Akram Nadwi, once remarked in class, is it not absurd for a scholar to prohibit women from attending the mosque for fear of fitna while none of these scholars would prohibit a woman from going to a mall/shopping centre?

This underlines the need for balanced fiqh that is suited to our times, one that allows both men and women to participate in spiritually elevated activities, such as going to the mosque and attending funerals while observing the appropriate Islamic decorum, so that the rest of their lives may be inspired by such actions. The answer to modernity’s generalised spiritual malaise is not the shutting out of opportunities for spiritual growth, but rather its opposite. This will only come about when Muslims, individually and communally, invest more of their energy in reflecting on how they can faithfully live according to the Qur’an and Sunna in contexts very different to those in which the ulama of past centuries resided.

Who Can We Trust?