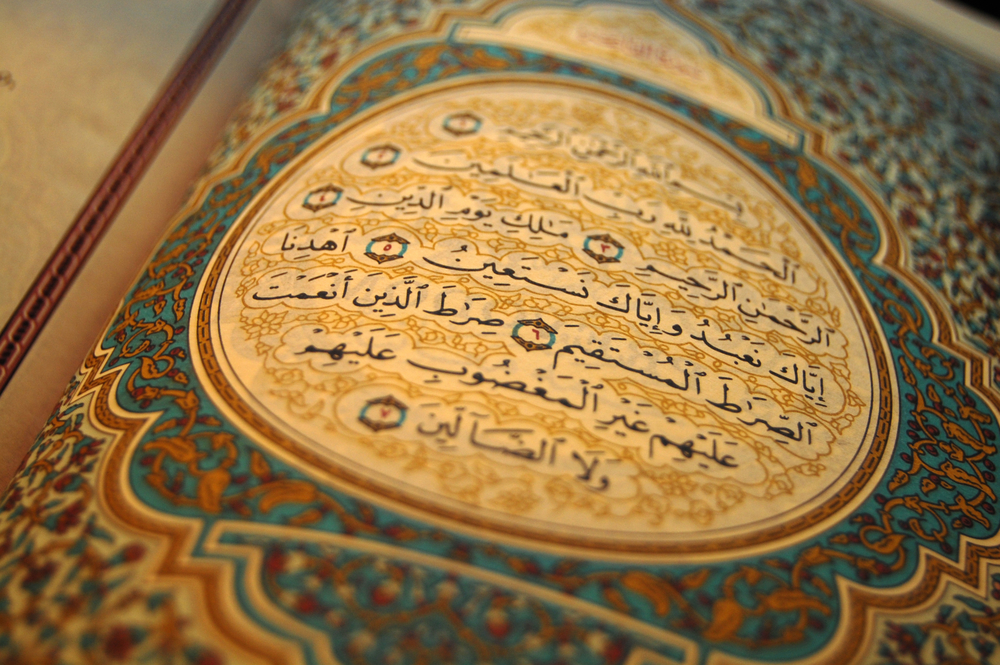 From the outset, the Qur’an establishes a link between worshipping Allah and knowing Him. The first half of the ‘Opening Chapter’ of the Qur’an, Surat al-Fatihah, states:

All praise be to Allah, Lord of the worlds. The All-Merciful, the Compassionate. Master of the Day of Judgement. You alone we worship, and Your help alone do we seek. [Q.1:1-4]

The first three verses teach us who Allah is, so that hearts may love, hope, fear and be in awe of Him. Only then does Allah ask us to declare our singular devotion and worship of Him. It is as if the Qur’an is saying: ‘You can’t worship or adore whom you don’t know.’

Thus in the first verse, Allah describes Himself as rabb – ‘Lord’. In the Quranic language, rabb is Master, Protector, Caretaker, Provider. And just as water descends from above as blessings and rises again to the skies as steam or vapour, so to the sending down of divine blessings and gifts; they are transformed into declarations of loving thanks and praise that ascend to the Lord of the Worlds. Reflecting on Allah’s care and kindness to us, as rabb; as Lord, then, nurtures an abiding sense of love for Allah in our hearts.

Allah then reveals that He, by His very nature, is al-rahman – the All-Merciful, and by dint of His divine act is al-rahim – the Compassionate. It has been said that al-rahman is like the blue sky: serene, vast and full of light; a canopy of protective care over us and over all things. The divine name, al-rahim is like warm rays, so to speak, touching, bathing and invigorating lives, places and events with this life-giving mercy. Those who flee from this joyous warmth, and opt to cover themselves from the light, choose to live in conditions of icy darkness. Knowing Allah is al-rahman, al-rahim, invites optimism; it instils hope (raja’) in Allah’s impulse to forgive, pardon, pity, overlook and, ultimately, to accept what little we offer Him as needy, fragile and imperfect creatures.

The Prophet ﷺ and his Companions once saw a woman frantically searching for a person among the warn-out and wounded. She then found a babe, her baby. She picked it up, huddled it to her chest and gave it to feed. On seeing this, the Prophet asked if such a woman could ever throw her baby into a fire or harms way? They all resoundingly replied, no; she could never do that; her maternal instincts of mercy would never permit it! The Prophet ﷺ went on to tell them:

The final name of Allah that we encounter in this surah is: Malik – Master, King, Owner of all. It is Allah as Master, as King of Judgement Day, who stands at the end of every path. All things come finally to Him to be judged, recompensed and given their final place for the beliefs that defined who they are, the deeds that defined what they stood for and the sins that stand in their way. To know Allah as Malik, therefore, is to be wary, as well as apprehensive. It is a reason for hearts to be filled with a certain sense of fear (khawf) as well as trepidation concerning the final reckoning and one’s ultimate fate.

The Prophet ﷺ once visited a young boy on his death bed and asked him how he was. The boy replied: ‘O Messenger of Allah, I am between hoping in Allah and fearing for my sins.’ To which the Prophet ﷺ said:

‘The like of these two qualities never unite in the heart of a servant except that Allah grants him what he hopes for and protects him from what he fears.” [Al-Tirmidhi, no.983]

Only after being made aware of these four names of Allah which, in turn, instil in hearts a sense of love, fear and hope in Allah, are we led to stating: You alone do we worship, and Your help alone do we seek. In other words, the order to worship comes after the hearts having come to know Allah – the object of their loving worship, reverence and adoration.

The surah concludes by teaching us to give voice to the universal hope, by asking to be guided to the path of Allah’s people and to help steer clear of the paths of misguidance and perdition:

A Word On Muslim Attitudes Toward Abortion

Etiquettes of Praying For Your Brother And Sister | Imam Omar Suleiman