Sh. Omar Suleiman delivered the opening prayer in the US House of Representatives yesterday, May, 9th, 2019  at the invitation of Rep. Eddie Bernice Johnson (D) of Dallas.

Immediately since, right wing media platforms have begun spreading negative coverage of the Imam Omar Suleiman – calling him anti-semitic, a common tactic used to discredit both Muslim activists as well as criticism of Israel policies.

News outlets citing the criticism have pointed to a post from The Investigative Project on Terrorism or ITP, as the source. The  ITP was founded by and directed by noted Islamophobe Steven Emerson. Emerson’s history of hate speech has been documented for over two decades.

Since then, the story has been carried forward by multiple press outlets. 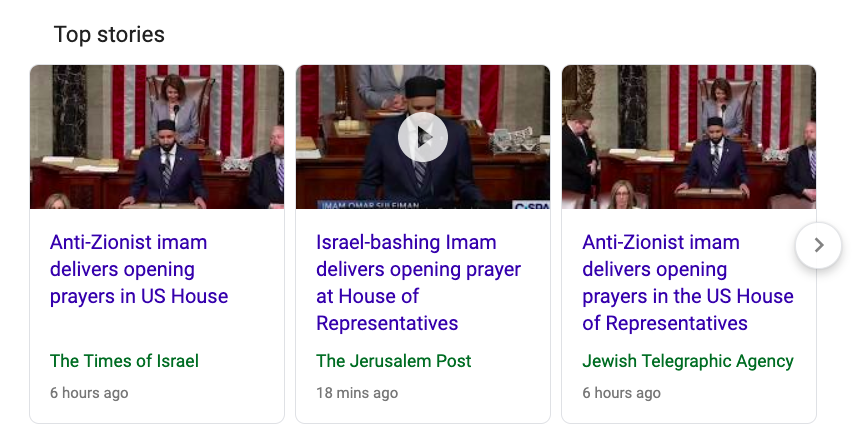 The immediate consequence of this has been the direction of online hate towards what has been Imam Omar Suleiman’s long history of preaching unity in the US socio-political sphere.

“Since my invocation I’ve been inundated with hate articles, threats, and other tactics of intimidation to silence me over a prayer for unity,” Imam Omar Suleiman says. “These attacks are in bad faith and meant to again send a message to the Muslim community that we are not welcome to assert ourselves in any meaningful space or way.”

MuslimMatters is proud to stand by Imam Omar Suleiman, and we invite our readers to share the evidence that counters the accusations against him of anti-semitism, bigotry, and hate. We would also encourage you to reach out, support, and amplify voices of support like Representative E.B.Johnson, and Representative Colin Allred. 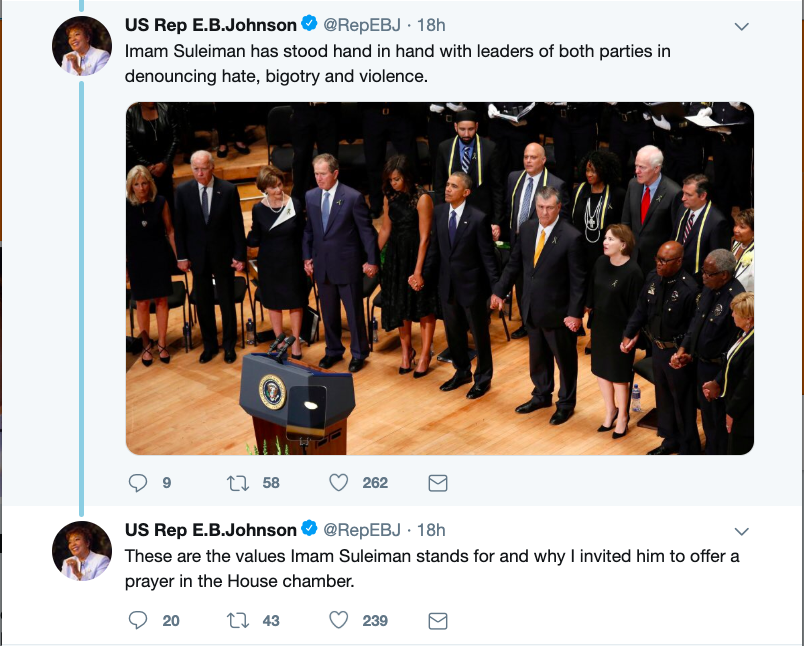 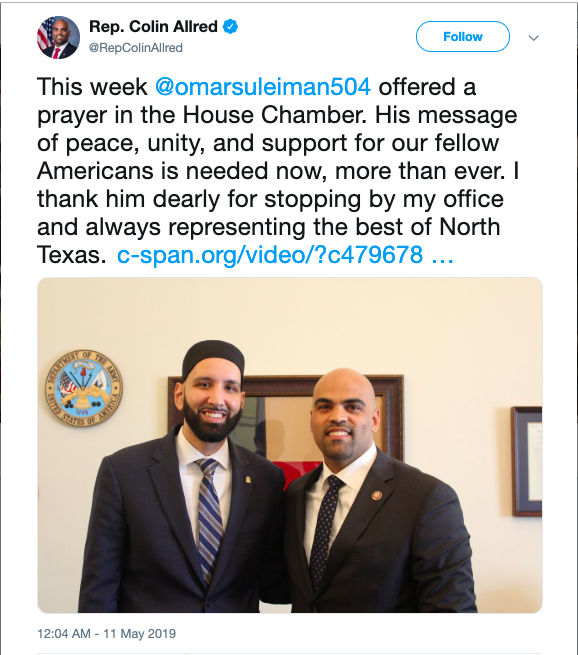 You can help counter the false narrative, simply by sharing evidence of Imam Omar Suleiman’s work. It speaks for itself, and you can share it at the hashtag #UnitedForOmar

A Priest, a Rabbi, and an Imam Walk Into a Church in Dallas

At an interfaith panel discussion, three North Texas religious leaders promoted understanding and dialogue among Muslims, Jews, and Christians. Amid a vexed political and social climate, three religious leaders in North Texas—a priest, an imam, and a rabbi—proved it’s possible to come together in times of division. Source: DMagazine.com 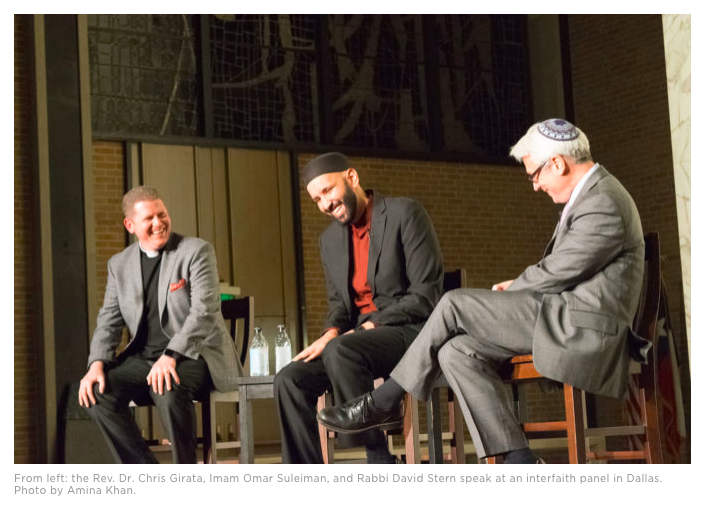 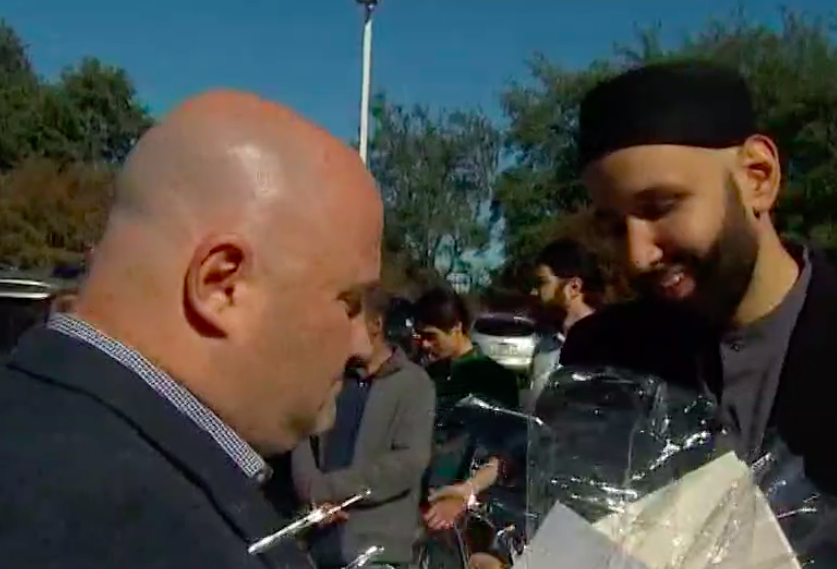 Through Dialogue, Interfaith Leaders Hope North Texans Will Better Understand Each Other

“When any community is targeted, they need to see a united faith voice — that all communities come together and express complete rejection of anything that would pit our society against one another more than it already is.” -Imam Omar Suleiman 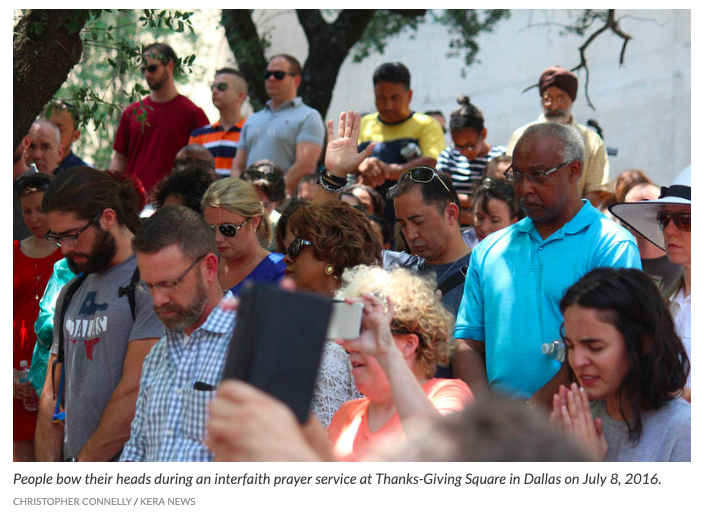 Conversations at The Carter Center: Harmonizing Religion and Human Rights

Imam: After devastating New Zealand attack, we will not be deterred

“My wife and I decided to take our kids to a synagogue in Dallas the night after the massacre at Tree of Life in Pittsburgh to grieve and show solidarity with the Jewish community. My 5-year-old played with kids his age while we mourned inside, resisting hate even unknowingly with his innocence…” Source: CNN

Related Topics:Featured
Up Next

Zeba Khan is the Director of Development for MuslimMatters.org and the producer of the newly launched Muslimmatters Podcast, as well as a writer, speaker, and disability awareness advocate. In addition to having a child with autism, she herself lives with Ehlers-Danlos Sydrome, Dysautonomia, Mast-Cell Activation Disorder, and a random assortment of acronyms that collectively translate to chronic illness and progressive disability.