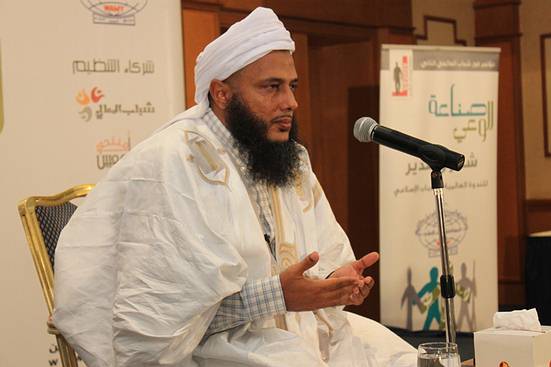 Shaykh Muhammad al-Hasan Wald al-Dadaw (b.1383/1963) (sometimes spelt: Muhammad al-Hassan al-Amin Walid al-Didu/Dedew al-Shanqiti) is a contemporary Mauritanian scholar who is rarely described without resorting to superlatives. He is certainly one of the most impressive ‘ulama of his generation. Of Bedouin heritage, his austere Mauritanian visage belies a gentle demeanor. Yet this polymathic scholar’s intellectual forays represent some intriguing possibilities for scripturally grounded Sunni scholarship in the modern world, whether in the arena of politics, social norms, or legal hermeneutics. These should make Dadaw of interest to both the traditional ‘alim and the Western academic. For Muslims in the West, such scholars do not usually produce ideas that are importable wholesale into Western contexts; but their breadth of Islamic learning provides useful insights into possible visions of Islam in modernity.

Shaykh Dadaw’s Islamic ideas deserve engagement in and of themselves, and I hope to write more about his thought in the near future. However, this short entry aims at providing readers with the contrasting scholarly cultures of Mauritania and Saudi Arabia, seen through Dadaw’s eyes. I draw here on an anecdote from the Shaykh’s own experience as a postgraduate student at Saudi Arabia’s preeminent institution of Islamic higher learning, Jami‘at al-Imam.

Dadaw’s Mauritanian heritage would usually place him within the Maliki legal school (madhhab)—the school that dominates much of North Africa—although he is not a strict adherent of the school in instances that he considers it to contravene the scriptural evidence. As he is wont to say:

“Acting in accordance with the sounder opinion is an obligation, not just more sound.”

His legal ideas concerning the schools are interesting of themselves, as he neither rejects the madhhab system wholesale, as do some modern Salafis; nor does he limit Islamic law to the four schools of law, or oblige lay Muslims to adhere to only one school, as many adherents of the Traditional Islam movement do, but this is a topic for another occasion.

Turning to the anecdote, in a 2012 interview on the Saudi-based satellite channel 4Shabab, Dadaw is asked about the differences between the scholarly culture of Mauritania and that of Saudi Arabia. In response, Dadaw presents a stark contrast between the highly-spirited Mauritanian intellectual milieu in which he was raised, and the extremely deferential academic environment of the Saudi institution in which he completed his Masters degree.

He characterises the Mauritanian scholarly culture to which he was accustomed, which was cultivated by both students and the scholars who taught them, to be one of audacity (jasara) and daring (jara’a) when it came to challenging authority. This was something that the scholars would actively encourage among their students; they would enjoy the to and fro of intellectual debate. Rather than seeking to teach a particular viewpoint, they would instead present an issue and allow the students to vigorously and freely debate it.

In my personal experience, the seminarial contexts in the UK that I have had the opportunity to study in often fostered more vibrant debate and discussion than my academic Islamic studies environment afforded. Yet, this appears to be changing in the British academic context, possibly in part due to the influx of seminary graduates into the field, many of who have a knowledge of premodern Islamic scholarship that students in Islamic academia cannot usually match. That is not to say that all Islamic seminaries in the UK are as intellectually engaging as I feel my own idiosyncratic experience was, but that the widespread stereotype—not always unfounded—regarding rote learning at seminaries provides only a partial picture of the reality in Western countries. Beyond this, it is almost certainly unreflective of major institutions of Islamic learning, such as Nadwat al-‘Ulama, though memoirs like Shaykh Mohammad Akram Nadwi’s Madrasah Life are probably more reflective of the experience of one of the institution’s more accomplished graduates.

Returning to Dadaw’s 2012 interview, he remarks that in his experience, students in Saudi Arabia treat their teachers with deference that borders on awe. As an example, he relates an instance in which he was attending a class on Islamic theology at al-Imam University, a class whose teacher—the Head of the Theology Department—was both intensely revered and feared by his students. This meant that the students dared not question the scholar’s teachings, or even correct him when he was patently wrong. Dadaw relates a humorous incident in which this scholar walked into the wrong lecture theatre, but students could not bring themselves to point out that he was in the wrong room. When the scholar spied the actual lecturer for the class patiently waiting outside, he apologised to him by citing “The Chapter of the Cow” from the Qur’an, commenting that “[All] cows [i.e. all the students] look the same to us.” (2:70) Dadaw affirms that the scholar in question, who he reveals at the end of the anecdote to be a scholar by the name of Muhammad al-Samhari, is indeed an intellectual heavyweight, deeply knowledgeable, and possessed of a phenomenal photographic memory able to quote authors works by volume, page, and line numbers.

It was in one of Samhari’s classes on Islamic creed (‘aqida) that Dadaw found himself speaking out of turn by the norms of Saudi scholarly culture. In a session in which the scholar was teaching the al-‘Aqida al-Tadmuriyya (The Creed of Palmyra) by Ibn Taymiyya (d. 728/1328), Dadaw found his teacher to be unaware of certain concepts of classical Islamic theology (‘ilm al-kalam) that Ibn Taymiyya was addressing. Thus, the scholar attempted to explain them in a way that reflected this unfamiliarity with the ideas under discussion. While the other students sat silently, possibly due to their own lack of knowledge of the theological concepts being dealt with, the then newcomer, Dadaw, plainly stated to his teacher: “You are on one path, and Ibn Taymiyya is on a completely different one.” In Mauritania, he tells the interviewer, rather than considering this insolence or irreverence, one’s teacher would be pleased by such an intervention.

In the Saudi context, by contrast, Dadaw’s cultural faux pas resulted in the lecture theatre’s shared shock, “as though a momentous event had just taken place.” The students in the room cast their collective reproachful glance upon the uninitiated Dadaw. Shaykh Samhari, on his part, responded by walking directly to the seated Dadaw and gently asking: “What are you saying, my son?” Dadaw proceeded to explain the discrepancy, and the scholar asked him to show the class using the board, and traded places with him by sitting in Dadaw’s seat. As the latter explained what he knew on the topic, Samhari, who swiftly absorbed the concepts, recognised their reasonableness. Asking some of the students to retrieve relevant works from the library, he found that they provided further corroboration of what Dadaw had mooted.

Lessons for Muslims in the West

Returning to my earlier reference to what Western Muslims can learn from such scholars and anecdotes, there is no doubt a need to cleave more closely on the part of Western Muslims to a culture that engages critically with one’s teachers and scholars, all the more so as such a critical posture is celebrated in Western culture, while the stance of deference may even be viewed with derision. Furthermore, given the fast pace of change in the modern period, critical insights are needed to preserve the vibrancy of a religious tradition that risks falling further into a sclerotic condition. Some such insights may cause one’s fellows to collectively look askance at one’s interventions, but that does not necessarily mean they will not be borne out by fair-minded deliberation.