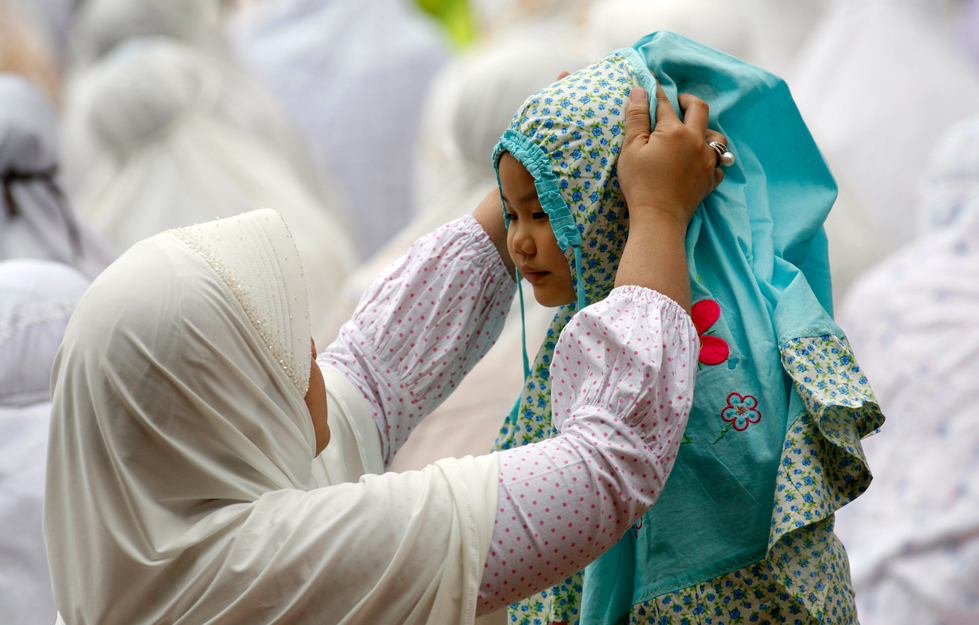 I let out an exhausted sigh as I sat down in the Masjid al-Haram after Asr prayers. My toddler had fallen asleep on the carpet. My body ached.

I was exhausted after many rounds of running in between the hotel and masjid and bathrooms, sometimes pushing him in his stroller and sometimes just carrying him in my arms as strollers are not allowed inside the masjid. My toddler seemed to have developed an upset stomach hence the bathroom runs, but nonetheless he had the hunger of a growing toddler so we also had to get out to eat. We had still not recovered from the jet lag from travelling for the Umrah from the other side of the globe, so we needed to schedule in naps at the hotel during the day as well. In addition, there was a windstorm blowing fiercely during that time in Makkah, making pushing the stroller up the incline to our hotel even harder. It was our last day in the holy city, and I wanted nothing more than to make the best of it. I wanted to perform every prayer at the masjid, I wanted to be able to pray close to the Ka’aba, I wanted to be able to just sit there in peace, make dua’ and read the Quran. But things just did not seem to be going as I wanted them to.

On that last day I had to push my child’s stroller up and down the steep incline to our hotel, having to carry him in my arms all the while because he did not want to walk, as we reached the masjid just as the adhan was being called, and search for a women’s prayer area that was not already full (that meant a lot more walking than you would think). I had to then push the stroller halfway to the hotel during the windstorm when he wanted to use the bathroom before realizing that did not seem possible, go back and park the stroller at the masjid, and finally take him to a public restroom. Then I had to carry a sleepy toddler back inside the masjid to find a place for prayer again.

I felt drained. My arms hurt, my legs hurt. I felt I was missing out on making peaceful ibaadah at the masjid, especially on the last day I had left there. I felt devastated. And then as if by inspiration, a thought crossed my mind. I remembered the story of Hajar

. She ran from Mount Safa to Mount Marwa, up and down and back and forth – so many times – just to find water to nurse her thirsty, crying baby. And Allah

made that struggle of hers an ibaadah that millions upon millions reenact every time they make Hajj or Umrah. An ibaadah without which no Hajj nor Umrah is complete. An ibaadah that every pilgrim without distinction – man or woman, young or old – partakes in.  An ibaadah which commemorates the true struggle, sacrifice, faith and resilience of a mother.

Ibaadah is not just Salah nor only praying in front of the Ka’aba, making dhikr, or reading the Quran. Ibaadah in Islam is not just confined to the ritualistic acts of worship or the five pillars we learn about. Getting through the tests Allah

“Charity is due upon every joint of the people for every day upon which the sun rises. Being just between two people is charity. Helping a man with his animal and lifting his luggage upon it is charity. A kind word is charity. Every step that you take towards the mosque is charity, and -removing harmful things from the road is charity.” [Bukhari]

“Every good deed is charity. Verily, it is a good deed to meet your brother with a smiling face, and to pour what is left from your bucket into the vessel of your brother.” [At-Tirmidhi]

In yet another hadith, Abu Dharr

has reported: “Some people among the companions came to the Messenger of Allah

gives us all different opportunities for ibaadah based on the situations He puts us in. For some of us, our ibaadah might be struggling through sleepless nights caring for our newborns, for others it may be waking up to pray tahajjud, and for others still it may be practicing patience in the face of a calamity. We all get chances to make different forms of ibaadah throughout different periods of our lives.

So, to my fellow mothers who are struggling to meet the needs of their children thinking that they are ‘missing out’ on all the extra ibaadah they could have made, remember the example of Hajar

honored her and elevated her status for her faith, perseverance and her struggle for her child. Allah

made her struggle an act of ibaadah that every pilgrim must perform to complete their pilgrimage. The prerequisite however, was faith and sincerity. Hajar

had unshakeable faith in Allah

and was ready to bear the hardships for Him.

Alone in that barren desert with no food, water nor anybody to help her, Hajar

ran back and forth between the hills of Safa and Marwa, trusting Allah’s

plan for her when Ibrahim

left her and their infant son Ismail

in the desert upon Allah’s

was leaving her in the desert she asked him “Is it Allah who has commanded you to do this?” He said “Yes.”. She said: “Then He will not forsake us.” [Bukhari].

had complete trust in Allah’s

plan for her. Yet she did not sit down passively without making an effort herself. She knew Allah

had a greater plan for them, but she was proactive in seeking water and help for her and her son. Because of her faith and tawakkul (trust) in Allah

, her struggle and effort became an act of worship. Allah

made that physical struggle an act of ibaadah for her. She was not just sitting down peacefully and making dhikr, she was struggling to find sustenance and help for herself and her baby.

How many times do we as mothers run around trying to meet the needs of our children? How many hours do we spend on our feet trying to care for our families? In those moments, do we trust Allah’s

can make those struggles of ours an act of worship if we only have faith and if we are sincere.

says in the Quran:

“Say: Lo! My worship and, my sacrifice and my living and my dying are for Allah, Lord of the Worlds.” [Surah Al Anam;162]

is also reported to have said: “You will never spend anything that you spend for the sake of Allah, but you will be rewarded for it, even the morsel of food that you put in your wife’s mouth.”  [Bukhari]

So to all the mothers who are exhausted running around meeting the needs of their families and constantly feeling that they are missing out on ‘peaceful’ ibaadah, just think about Hajar

is giving you the chance of an act of ibaadah just like that of hers.

Nobody Cares About Black Muslims, He Said

Four Marathons in Three Weeks: One Man is Running to Bring Clean Water to Senegal