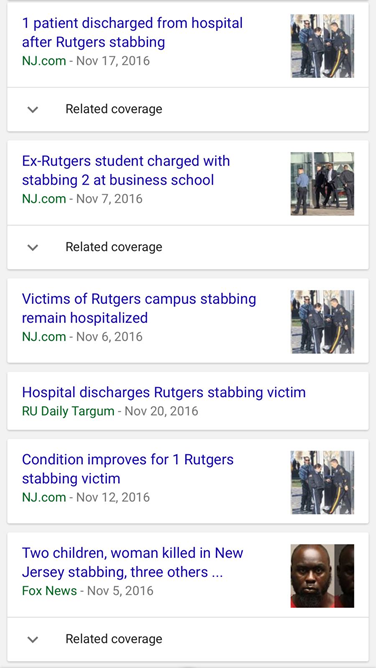 By now, everyone has learned the details of how Abdul Razak Ali Artan carried out a violent attack against seemingly random passersby on the campus of Ohio State University. But a nearly identical stabbing attack also took place earlier this month at Rutgers University, and practically no one heard about it.
The main difference? The attacker’s race.

Artan was a young black immigrant from Somalia who had spent time in Pakistan, and who evidently came from a Muslim family. In contrast, the attack in Rutgers was carried out by Joshua S. Thompson, a 25-year-old  business student, from Mountainside, NJ., who stabbed two people with a knife before turning the weapon on himself.   The attack also appears to have been unprovoked, and also to have targeted random individuals.

The media, as usual, began digging into the Somali attacker’s life for evidence of “radicalism” and labeling him a terrorist as soon as his name, race and national origin were discovered, and his perceived faith was described as a credible motivating factor for his actions.

However, articles about Thompson’s attack uniformly lack this breathless speculation about race or religion; frantic digging into the attacker’s background for any clue about motive or church attendance; and follow-up stories in the days after the event as more information became available. In my research into the coverage, I could not find a single instance of a piece about the event printed later than a day or two after it occurred by a major outlet.

In their coverage of the Rutgers incident, MSN simply stated that “It was not clear what motivated the attack,” and didn’t investigate further. 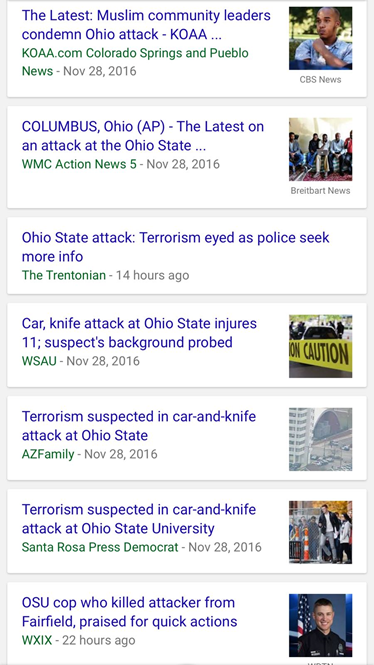 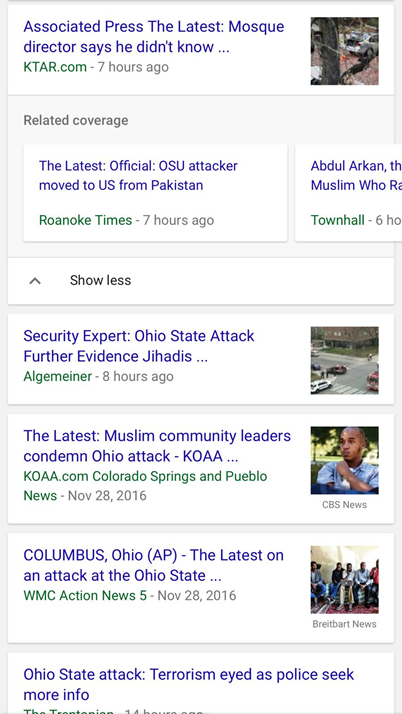 However, their article about the violence at Ohio State, luridly headlined “Ohio State attack: What we know about Abdul Razak Ali Artan,” provides detailed documentation of his social media habits and personal life. It digs through his postings and background, drawing together past statements to craft a narrative charting a path toward violence.

Fox News’ coverage of the Rutgers story is remarkably balanced: it describes, without hyperbole, the facts on the ground, plainly laying out the unknown and known elements (“the attack reportedly took place in a university office;” “Rutgers University posted the following statement…”), and avoiding speculation in the absence of clear evidence.

In contrast, their reporting on the tragedy at Ohio State, headlined by an article titled “Investigators believe OSU attacker self-radicalized, inspired by ISIS propaganda,” focuses purely on the attacker’s motive, racial and religious background, and the potential scope of his connections with ISIS. He is presented as part of a broader pattern of terrorist-inspired violence that threatens to strike at any moment.

Simply comparing the results of the first page of a simple Google search for the incidents is telling:
The variation in coverage lies not only in the addition of “terror” or “terrorism” as suspected roots of the Muslim perpetrator’s spree, but, more essentially, in the distinction between fact-based reporting in the former case and speculation about motivations in the latter. As has been voluminously documented, when a white male carries out an attack against civilians, the blame is placed on factors such as circumstances (“he just lost his house”) or environment (“she was from a bad family”); in the case of the Rutgers attack, Thompson’s motivations go unquestioned, and his actions are not taken to be stand-ins for larger existential threats.

But when an individual perceived to be Muslim commits a crime, media outlets immediately begins searching for intrinsic, belief-centered motivations for his or her actions. The impetus is to connect them to larger “terror networks” instead of assuming that they are individuals acting in isolation, or similarly acknowledging the presence of the same external factors that can drive any individual to commit an act of violence such as losing a job, going through a breakup, mental health issues, or substance abuse.

It’s entirely possible that Artan carried out his attacks based on a perverted understanding of Islam’s mandates; such actions manifest among people from all religious backgrounds. But regardless of whether this is the case, the immediate labeling of his actions as related to “terrorism” as soon as he was found to be from a Muslim background, and the disproportionate emphasis on his religion as a motivating factor to the exclusion of all others, stands in contrast to the media’s treatment of white individuals such as Joshua Thompson.

Unless such incidents are covered more responsibly, it will only serve to further reinforce the public perception that Muslims are responsible for all acts of terrorism, and to stigmatize the broader Muslim community more deeply. If media outlets are going to profess adherence to their own principles of fair and balanced coverage, then they either need to thoroughly investigate the motivations of everyone who commits such crimes, or no one; race or religious affiliation cannot remain the litmus test for journalistic ethics.

John Robbins, PhD. is the Executive Director of CAIR-Massachusetts